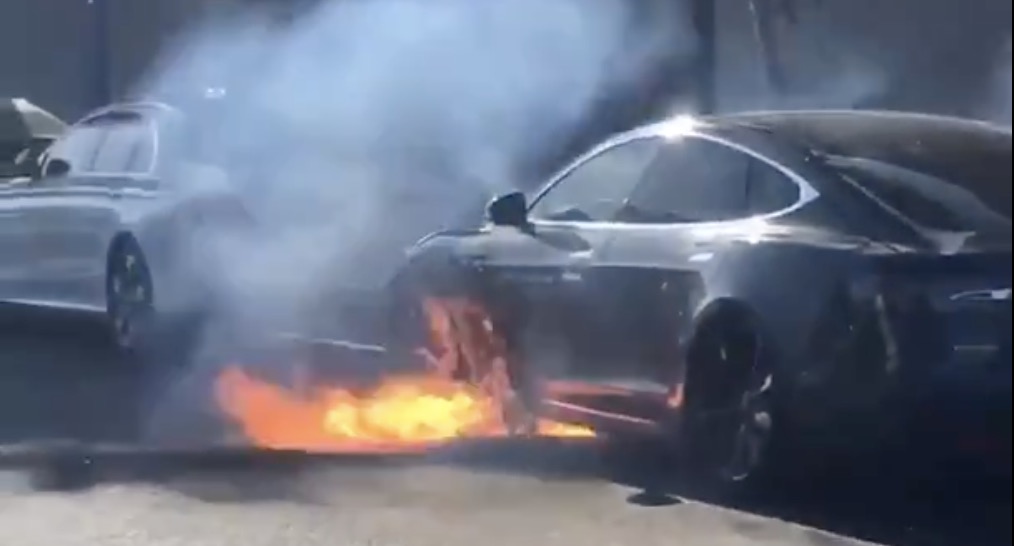 The battery pack of a Tesla Model S caught on fire yesterday in Los Angeles.

The owner says that the fire started “out of the blue” without any impact while the vehicle was being driven in traffic. Tesla says that it is investigating the situation.

The incident was reported to Tesla on Twitter by actress Mary McCormack who said it happened to her husband’s Model S.

“This is what happened to my husband and his car today. No accident,out of the blue, in traffic on Santa Monica Blvd. Thank you to the kind couple who flagged him down and told him to pull over. And thank god my three little girls weren’t in the car with him.”

McCormack shared the following video of the aftermath after her husband was flagged by passersby:

@Tesla This is what happened to my husband and his car today. No accident,out of the blue, in traffic on Santa Monica Blvd. Thank you to the kind couple who flagged him down and told him to pull over. And thank god my three little girls weren’t in the car with him pic.twitter.com/O4tPs5ftVo

We contacted Tesla about the incident and a spokesperson responded:

“We offer our support to local authorities and are investigating the incident. We’re glad our customer is safe.”

Tesla vehicles catching on fire were often in the news a few years ago after a series of fire happened in a relatively short period of time – leading people to believe that it was a frequent occurrence with Tesla vehicles.

The automaker claims that statistically, their vehicles are 10 times less likely to catch on fires than gas-powered cars.

Tesla fires are now back in the news following a few recent instances of Tesla vehicles catching on fire after crashes.

In this case, the difference is that the vehicle reportedly caught on fire on its own without any impact.

Media often bring too much attention to electric vehicles catching on fire after impacts, which leads to a false perception that it’s unique to EVs even though most vehicles will catch on fire after hitting a concrete wall, like the recent examples.

But battery fires that start without any impact are more worrying – not that it doesn’t happen with gas-powered cars too, but it happens for different reasons that need to be addressed. There are over 150,000 car fires per year in the US.

In this case, the fire clearly breached the battery pack, which makes it look like it was punctured.

The driver says that there wasn’t an accident, but it’s not impossible that the underbody hit something without them knowing it.

It is reminiscent of a few instances of Model S battery packs being punctured by objects on the highway which led to fires.

Tesla ended up adding a new underbody plate to the vehicle to fix the issue.

Now I am not saying that it’s impossible that it caught on fire on its own either. In 2016, a Tesla Model S caught on fire during a test drive event in France without any impact.

The automaker eventually determined that the fire was due to ‘electrical connection improperly tightened’ by a human instead of robots.

We will follow any development on this incident to see if it indeed caught on fire without any impact and if that’s the case, we will report back if they can find the cause.