During Tesla’s 2018 shareholder meeting yesterday, CEO Elon Musk teased a new Autopilot software update that could come as soon as this week and he talked a little about upcoming Enhanced Autopilot features.

He even confirmed that Tesla plans to bring back free Autopilot trials.

Back in 2016, Tesla started pushing Autopilot trials over-the-air to Tesla owners who had a vehicle with Autopilot hardware but who didn’t buy the convenience feature package.

The following message would appear on your vehicle’s center console to offer a 1-month free trial: 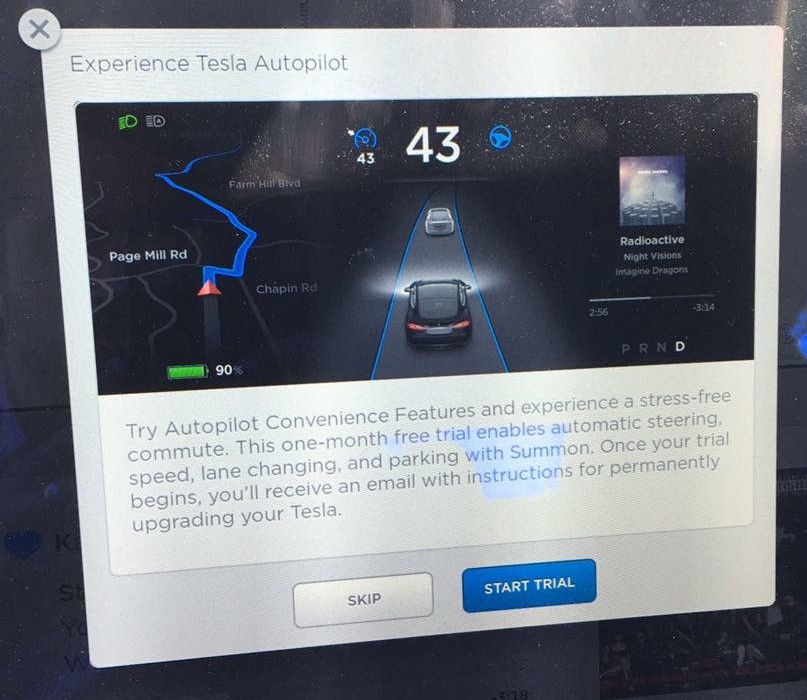 It sounds like owners who didn’t have Autopilot will be able to try a new version since Musk also teased an upcoming software update during the meeting.

The CEO said that the new update could come this week and it features “significant improvements”.

Electrek has learned of an update being tested in beta in Tesla’s customer test fleet and it features some incremental improvements to latest versions of Autosteer and TACC.

It also again features the vehicle renders on other lanes on the instrument cluster, but it was also the case for the last update and Tesla didn’t release it to the wider fleet.

There also seems to be a focus on the capabilities on highway ramps – something that we have been noticing recently.

The update being tested features improvements in deceleration when taking an off-ramp on the highway.

It’s especially interesting considering Musk also commented on when owners are going to start seeing the ‘Enhanced Autopilot’ features, which are over a year late at this point.

He talked about ‘On-ramp to Off-ramp’ coming in the “next couple months”.

“Once on the freeway, your Tesla will determine which lane you need to be in and when. In addition to ensuring you reach your intended exit, Autopilot will watch for opportunities to move to a faster lane when you’re caught behind slower traffic. When you reach your exit, your Tesla will depart the freeway, slow down and transition control back to you.”

Musk says that he himself tested a version of the software with the feature earlier this week and he sees a path for it to be released to the fleet in the next few months.

I know it’s hard for Autopilot 2.0 owners to believe Musk’s timelines when it comes to Autopilot features these days.

But we have been saying over the past few months that we think major improvements are going to come faster after the recent rewrite of Autopilot’s neural net and machine learning capabilities.

Musk commented on that yesterday. He said that Autopilot reliability and capability will “increase exponentially over the next 6-12 months.”

As usual, I like to add a little reminder that even though the system is improving significantly over the last few months and it looks like it will continue to improve, it’s important not to be overconfident in the system and always stay attentive when using it and be ready to take control.

Stay safe out there.