There’s currently a lot of talk about charge rate for electric vehicles as Porsche is preparing to bring its 350 kW charging technology to market and Tesla is throwing some cold water on their plans.

Now ChargePoint unveils a new 2 MW charging technology, but it will be for electric aircraft and semi-trucks – not passenger cars.

What Tesla CEO Elon Musk and CTO JB Straubel said when they throw cold water on Porsche’s plan is that a 350-kW charge rate for a passenger electric vehicle with a relatively small battery pack results in too much of a trade-off with range and cost for the customer.

But they did add that it shouldn’t be an issue for vehicles with a much bigger battery pack.

Tesla itself has been talking about its ‘Megacharger’, which is estimated to have a charge rate of over 1 MW, for its electric semi truck.

Now ChargePoint tops it off with a new 2 MW charging technology at the second annual Elevate Summit, which took place May 8-9 in Los Angeles.

It follows their announcement at the event last year when ChargePoint was chosen to provide charging stations for Uber’s plans for an all-electric VTOL taxi service.

We have now a better idea of the kind of power that those stations will pack as ChargePoint unveils a new charge connector and release details of its 2 MW charging technology for electric aircraft and semi-trucks : 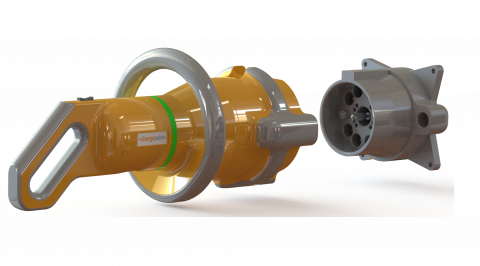 Pasquale Romano, President and CEO of ChargePoint, commented on the unveiling of the tech:

“The drivetrain debate has ended and electrification has won out as the propulsion method of choice across transportation categories, as evidenced by the growing interest in electrifying semi-trucks, aircraft and beyond. Revealing a new concept design for high-powered charging at the second Elevate Summit is appropriate as the Uber team prepares to get Elevate off the ground in a few short years. The new design not only provides a first look at a common industry connector that can provide benefits to the manufacturers and operators of electric semi-trucks and aircraft, but is a catalyst for an important conversation in the industry.”

The company elaborated on the design challenges of such a charging technology:

“The ChargePoint engineering team focused on several key elements in developing the new design. To meet performance requirements, up to four BMS interfaces and four 500-amp delivery circuits are needed. Each delivery circuit will have a voltage range from 200 to 1000 volts. To facilitate autonomous data and vehicle performance payload offload, a provision for high speed data transfer was also included. Designed to be used in heavy vehicle applications, the connector must be rugged and able to withstand the rigors of frequent use, while also being easy to insert and remove.”

In order for it to be easy to insert and remove, ChargePoint says that it is developing a motorized system to aid in the insertion process.

Uber announced plans to commercialize electric VTOL aircraft for ride services as soon as in 2023. They are already working on securing locations for skyports, where those charging stations will end up.