Electric bicycles are quickly working their way out of the shadows and into the mainstream cycling world as e-bike sales continue to grow. E-bikes combine the draws of cycling, including low-cost, fun and traffic-free commuting, with the advantages of cars and motorcycles – namely, that the vehicle does the work for you.

Great for more than just utilitarian uses, electric bicycles are also excellent for pleasure riding. The addition of an electric motor ratchets up the fun on everything from bicycle trails to snowy slopes and sandy beaches. If one electric motor can have this much impact, imagine what two motors could do!

When used in a fat bike, a bicycle with extra wide 4″ tires, all-wheel drive makes it easy to absolutely fly right over the top of soft sand or powdery snow. Wet and muddy environments are also a great use for all-wheel drive e-bikes, as the extra traction from the front wheel can help pull you out of a hole or mud pit.

On the road, all-wheel drive can help your e-bike perform better and ride more comfortably. By using two motors, you can spread the weight out front to back, instead of having all the motor weight in the rear wheel, as in most hub motor e-bikes. You can also use two smaller motors instead of just one big motor, further helping to even out the weight distribution of the bike.

My everyday commuter e-bike uses all-wheel drive, giving it a sleeker, stealthier look. With two small 350 W motors overvolted to 600 W each and hidden in the wheel hubs, it looks like a sleeper but tears away when the light turns green. Plus, the ability to easily climb up and over curbs with the front wheel is perhaps one of my favorite features.

As much fun as all-wheel electric bicycles are, they are much less common than their single motor comrades. Fortunately, there are a few companies out there offering dual motor setups to get you up, over and around nearly anything on your e-bike.

Easy Motion Ebikes, owned by BH Bicycle Corporation, has a few all-wheel drive e-bikes for different scenarios. The Easy Motion Evo Snow 29″ ($3,199) is a great candidate for either an off-road all-wheel drive e-bike or for use commuting on pike paths and city streets. It’s large 29″ x 2.25″ tires can handle rough terrain and also help smooth out the ride considerably. Ev0 Snow 29″ uses a 250 W front motor and a 350 W rear motor powered by a 432 Wh battery.

A common theme you’ll see among all-wheel drive e-bikes is either matching motors or a smaller motor in the front. As less weight rests on the front wheel, it’s a good idea not to overpower it, which could lead to front wheel burnouts. 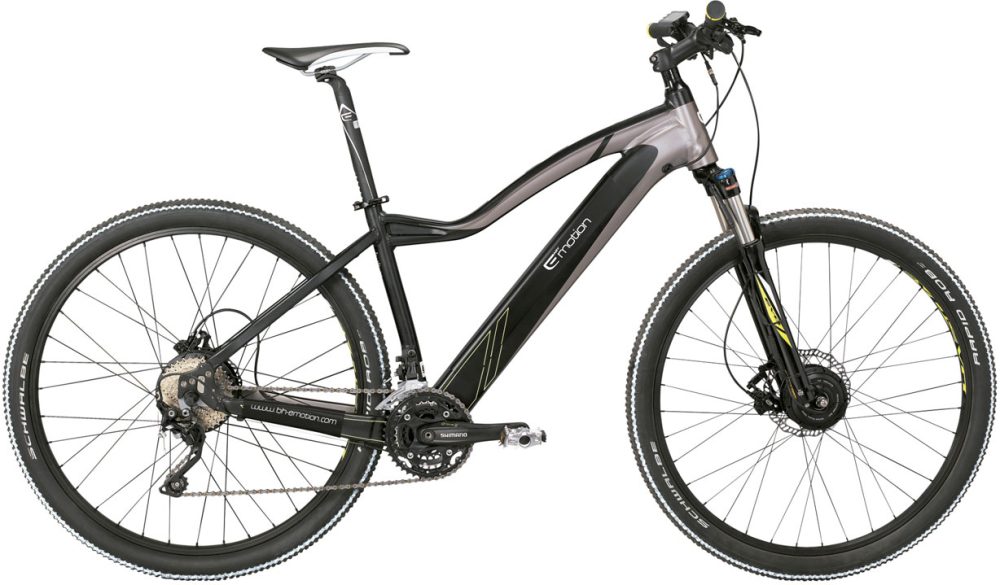 The Evo Snow’s big brother is the Easy Motion Evo Big Bud Pro ($3,499), a fat bike built on a similar frame and using the same 250 W front and 350 W rear motors. It ditches the suspension fork for a steel fork, but you get the larger tires and a higher capacity battery pack.

As opposed to the Evo Snow, which was a great hybrid bike for both on and off-road riding, the Evo Big Bud Pro is definitely optimized for off-road conditions. This is the bike you want for blowing past those cross-country skiers or escaping the lifeguard beach patrol.

Another option is a diabolically clever setup designed by Steve Christini which powers both wheels by means of a driveshaft linkage hidden inside of the bicycle frame. The kicker is that this setup was originally designed to turn standard pedal bikes into all-wheel drive, and has since been incorporated into mid-drive electric bicycles. This innovation means you can use a single motor in the center of the bike that powers both wheels. Christini bikes offers an AWD fat bike based on the technology for $3,999.

Why buy when you can DIY?

As you might have noticed, the price for these AWD electric bicycles is fairly high, in large part due to their rarity and lack of competitors. However, if you’re already handy with a wrench and capable of basic bicycle maintenance tasks, you could easily build your own AWD bicycle simply by converting a standard pedal bicycle into an electric bicycle with two motors.

To do so you’ll need to start with a donor bike. If you already have an old mountain bike or other strong bike lying around, you’re all set. If not, you’ll want to find a sturdy bike, preferably with a steel frame and fork. It doesn’t have to be expensive.

Counterintuitively, some cheaper steel frames are often great electric bicycles since they don’t pay attention to weight optimization and thus are often slightly overbuilt. If you really want to have some fun, I’d recommend going with a fat bike. In fact, you can even save yourself some of the work and start with an electric fat bike, then just add the second motor to the front wheel. 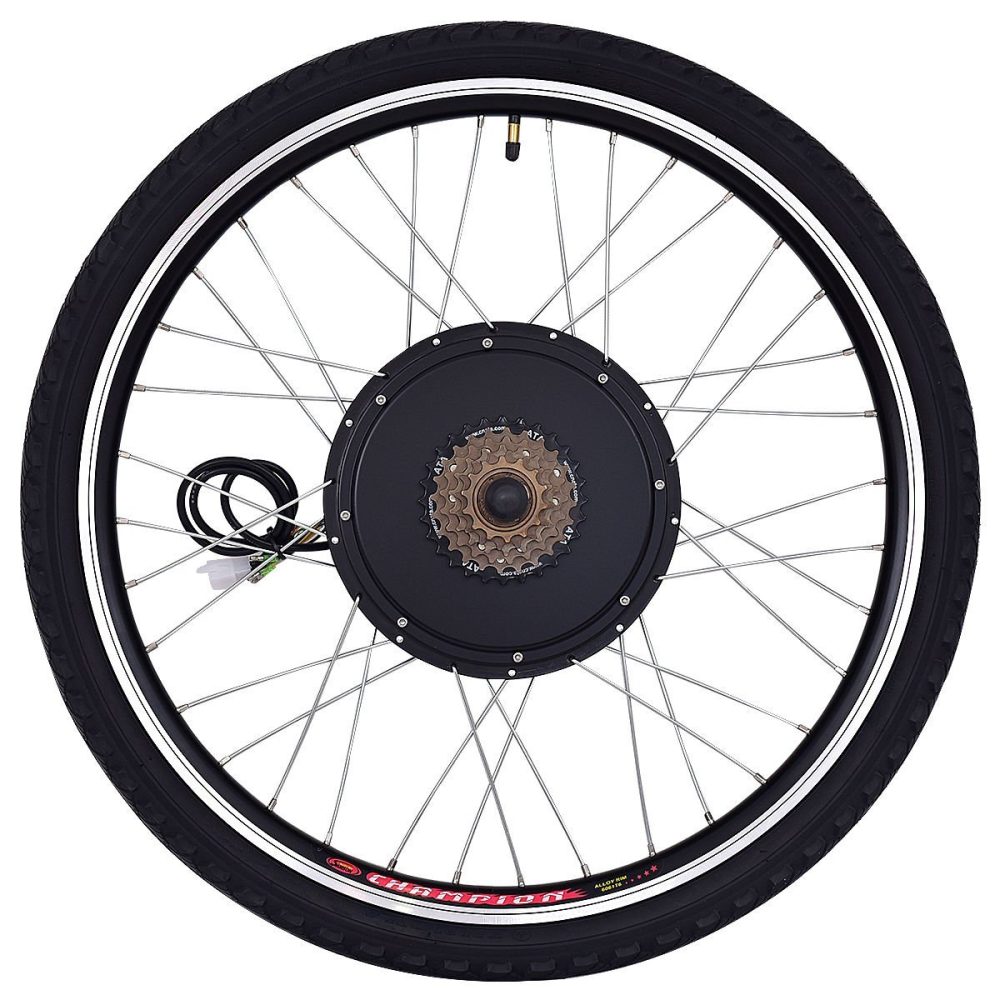 Once you have your bike, you’ll need two electric bicycle conversion kits. I recommend sticking with a couple 500 W kits, or even a 1,000 W rear and 500 W front kit. The kits are designed to be plug and play, including everything you need except for the battery. To install a hub motor kit, you simply remove your old wheels, transfer the tires onto the hub motor wheels, then bolt the hub motor wheels into the bike. Remember that if you’re using a fat bike, you’ll need an electric fat bike conversion kit that comes with the larger wheel rims.

Lastly, you’ll need an electric bicycle battery. This can be either a single strong battery or two smaller batteries. The voltage of the battery should match the voltage of the electric bicycle conversion kit, and will likely be either 36 V (standard) or 48 V (stronger and faster). I wouldn’t recommend building an AWD e-bike with 60 V or higher for your first e-bike, as you’ll start getting into specialty parts and power levels that can become dangerous without prior experience.

To simplify the bike, I’d recommend just using one larger battery, though you should make sure it has a decently large capacity, around 20 Ah. For a 36 V battery, this will be approximately 750 Wh, or for a 48 V battery, look for around 1,000 Wh.

In my bike, I used a single 48V 20Ah battery. Depending on the type of battery you use, it might not come with a mounting solution. If that’s the case, you’ll want a triangular frame bag to hold the battery in the front triangle of the bike.

If this sounds complicated, don’t worry, it’s a lot easier in practice. I created a video showing how its done below.

To use a single throttle, connect the three throttle wires to one controller’s throttle connector, then connect the throttle signal wire from the other controller to the first controller. The throttle signal wire is usually the one wire of the three throttle wires that isn’t red or black. If you don’t know which is the signal wire, just ask the vendor of that electric bicycle conversion kit. This same method can also be applied to a pedal assist sensor instead of a throttle. Again, this is simpler than it sounds. Check the video above to see it explained visually.

One other method would be to add a mid-drive electric bicycle conversion kit, such as the popular BBS02, to drive the rear wheel. Then add a front wheel hub motor kit for the front. This gives you a combination of mid-drive capability and hub motors, which can add the ability to add powered gears to your bike.

One last note is legality: electric bicycle laws differ state-to-state in the US and around the world. In many areas, two motors combined might provide more power than is legally allowed in your area. Be sure to check your local laws to ensure that your electric bicycle fits the legal power limit, or stick to using your AWD e-bike for purely off-road fun.