While Tesla’s original Roadster that SpaceX launched into space on the new Falcon Heavy captured a lot of attention, we are still more excited here about the next-generation Roadster currently under development.

Now a Tesla next-generation Roadster prototype shows up at Gigafactory 1 in Nevada.

Tesla appears to be touring the vehicle around its facilities to show it to employees.

Last month, it was spotted at Tesla’s headquarters in Palo Alto and it gave us one of our best look at the next-generation Roadster prototype to date.

The prototype was also spotted on Tesla’s Fremont test track around the same time.

Now Tesla brought seemingly the same red Roadster prototype to the Gigafactory 1 in Nevada – a trip that it should easily be able to complete a range of up to 620 miles, according to the company.

It’s giving us one of the best looks at the new all-electric hypercar (pictures via steveroth23 and roslynn.ricard on Instagram): 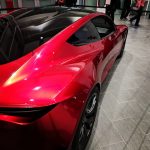 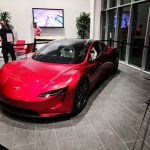 This is an extra exciting time to cover Tesla because we get cool sightings of prototypes vehicles of two different programs (Tesla Roadster and Tesla Semi) at the same time.

And we could soon start to get a third one with the Model Y?

Keep an eye out for those on the road and let us know if you see them.