In Tesla’s financial results and conference call this week, the company talked about a few logistic projects, but the most surprising was the possibility of a Boring Company tunnel at Tesla’s Fremont factory.

CEO Elon Musk previously suggested that they could build a Hyperloop route between Tesla Fremont and Gigafactory 1 to curb the ‘gigantic’ logistic costs to move materials and components between the two locations.

This project seems to be on hold since Tesla reiterated that it will be its own first electric semi truck customer with a cargo route between Fremont and Gigafactory 1.

The company wrote in its shareholder letter this week:

“Tesla will be the first Semi customer. We plan to use the Tesla Semi for our own logistics by transporting Model 3 components from Gigafactory 1 to Fremont.”

In a conference call following the letter, Tesla CTO JB Straubel emphasized how logistics are creating a bottleneck as they ramp up Model 3 production

“The material flow delivery that Elon mentioned – as we develop very high density and velocity lines, the limit starts to become how we get material to that line. We’ll solve that for the Model 3 line, but eventually, within Fremont, the limit to production may be how many trucks we can get in how quickly.”

Musk then added that they are considering building a hyperloop system or electric skates under Fremont to handle some transport between its local facilities and limit the number of trucks required.

The CEO said during the call:

“We are looking at building tunnels using The Boring Company’s thing because we have, for example, our seats production is at a separate building on Page. And we have a bunch of trucks moving seats back and forth between both the primary Fremont production and the seat factory. And we actually get constrained on how many trucks can we dock and undock at the seat factory, which is only, I don’t know, half a mile or a mile away from the vehicle plant. So it’ll be pretty easy to just have a tunnel, do an automated conveyance from seats to the factory.”

Here’s where the facility is located in relation to the main factory: 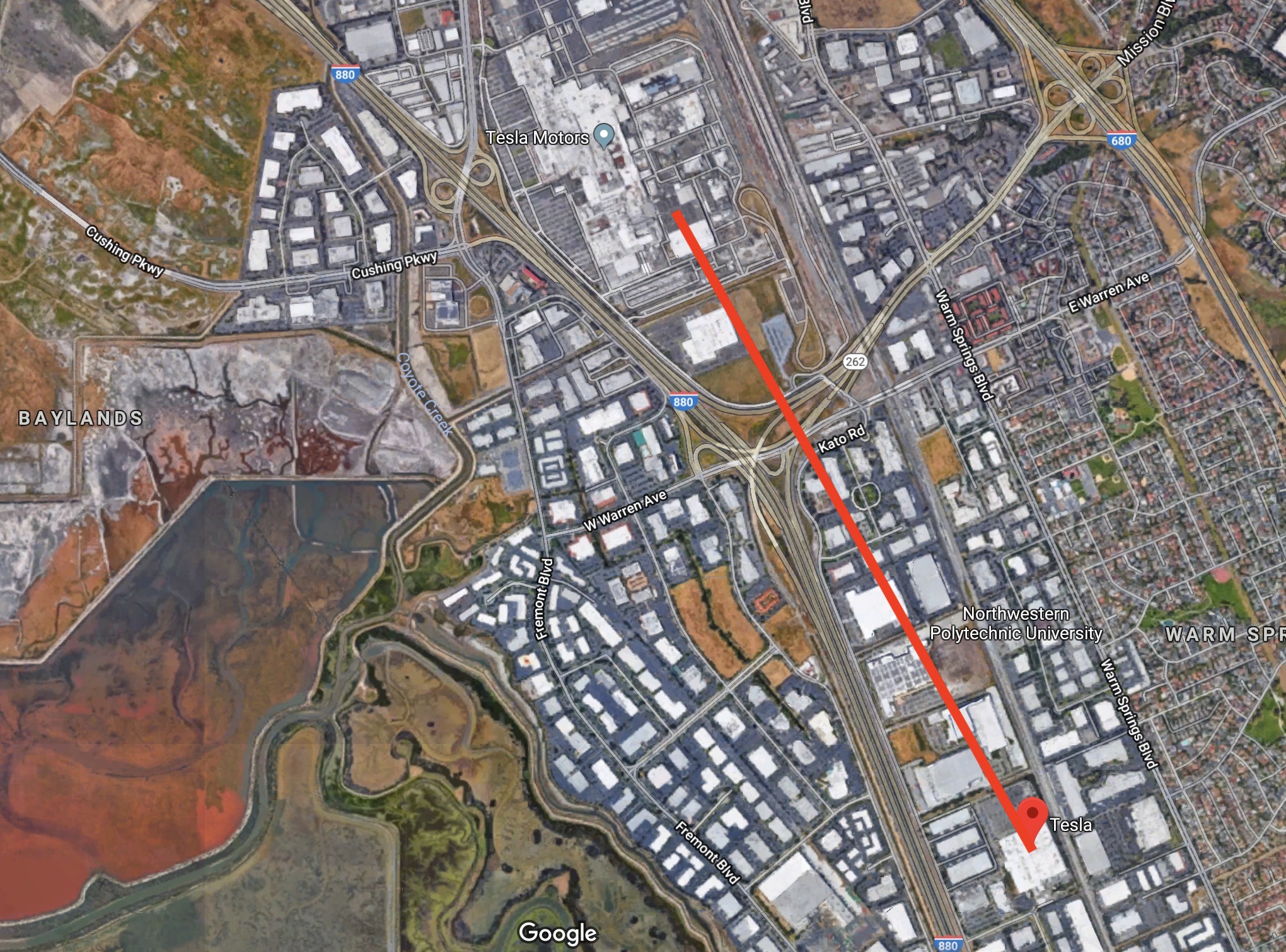 Musk estimates that a system like that could help reduce the material flow bottleneck and help Tesla reach a total production of 700,000 cars per year in Fremont (600,000 Model 3s and 100,000 Model S/X).

It sounds like an ambitious project, but what’s new when it comes to Tesla and Elon Musk.

It could actually be another good test tunnel for the Boring Company to develop its tunneling technology.

As we saw in Culver City recently, the local government approval is often the most difficult restraint for those kinds of projects, but Tesla has a lot of pull in Fremont and if the project reduces the number of trucks on the road, it should be welcomed by locals.