Over the weekend rumors started floating around on social media about a possible stop-sale and recall on all the BMW i3’s sold in the United States of America. This morning BMW came out with an official statement, confirming that, during recent testing by the National Highway Safety Administration, it was discovered that the BMW i3 (BEV and REx) marginally exceeded one particularly edge case of the many Federal Motor Vehicle Safety Standard criteria with respect to frontal impact performance.

NHTSA testing results in BMW i3 stop-sale and recall

According to NHTSA testing, the issue is related to frontal crash protection for the ‘5th percentile female’ drivers when they do not wear their seatbelt. 5th percentile females are categorized as around 5 feet tall and weighing 110 pounds. This group is at a marginally higher risk of sustaining neck injuries than is allowed in case of a frontal collision when they are not wearing their seatbelt. Wearing your seatbelt is mandatory in all but one state in the U.S. –New Hampshire is the exception.

New Hampshire has enacted neither a primary nor a secondary seat belt law for adults, although the state does have a primary child passenger safety law that covers all drivers and passengers under 18.

All BMW i3 models are affected

The stop-sale and recall was first reported by Tom Moloughney effects all 2014-2018 BMW i3’s (both BEV and REx models) that have been sold and delivered in the U.S. since 2014. Approximately 30,542 vehicles are affected by the delivery stop/recall, consisting of 1,159 in dealer inventory and 29,383 retailed. All the vehicles in the pipeline are also on hold.

The stop-sale and recall adds up to quite a sizable and expensive problem for BMW USA. We have reached out to the company for comment and as of yet, there does not seem to be a straightforward solution to it. BMW is working on it though. Of course, there is a very simple and straightforward solution for current owners, just wear your seatbelt when you drive a BMW i3, or any other car for that matter – especially if you are a 5′ tall 110lb female.

While BMW’s compliance testing showed results well below the required limits, more recent testing has shown inconsistent results. Consequently, BMW has issued a recall and is working with the agency to understand the differences in the test results. A remedy is forthcoming.

The BMW passive safety systems are optimized for safety belt use. BMW i3 owners should feel confident that their vehicle will perform well in a real world crash when the safety belt is used. BMW recommends that all vehicle occupants fasten their safety belts before driving, and keep them fastened for the duration of travel.

Customers with questions may contact BMW Customer Relations at 1-800-525-7417, or email CustomerRelations@bmwusa.com. 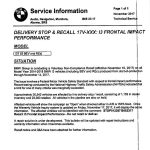