Tesla is still only slowly delivering the Model 3 to employees, family members of employees, and company insiders, after having pushed regular customer deliveries following production difficulties.

The company still has somewhat of a tight grip on those early vehicles and it asks owners not to share details or review the vehicle, but it looks like that grip is starting to loosen as more Model 3 vehicles hit the road.

Last month, the Tesla Model 3 Owners Club Youtube channel released an hour-long review of an early Model 3 loaned from one of those lucky few owners.

Now another popular Youtuber, Doug Demuro, known for his reviews of rare vehicles, also got his hands on an early Model 3 and produced a review of the car.

While the Model 3 Owners Club’s video was more of a technical/educational video, Demuro used his usual structure of showing special quirks and features unique to the vehicle and then moved to a point by point review and scoring of the vehicle’s features.

The video is certainly worth a watch and while you probably will not learn much from the first part if you have been following this site closely, Demuro’s opinion and comments in the second part are quite insightful:

The short version is that the Model 3 scores high on the “Doug Score” for a vehicle in its price range.

Here’s where it ended up on the list of cars that he tested so far – not in bad company at the top of that list: 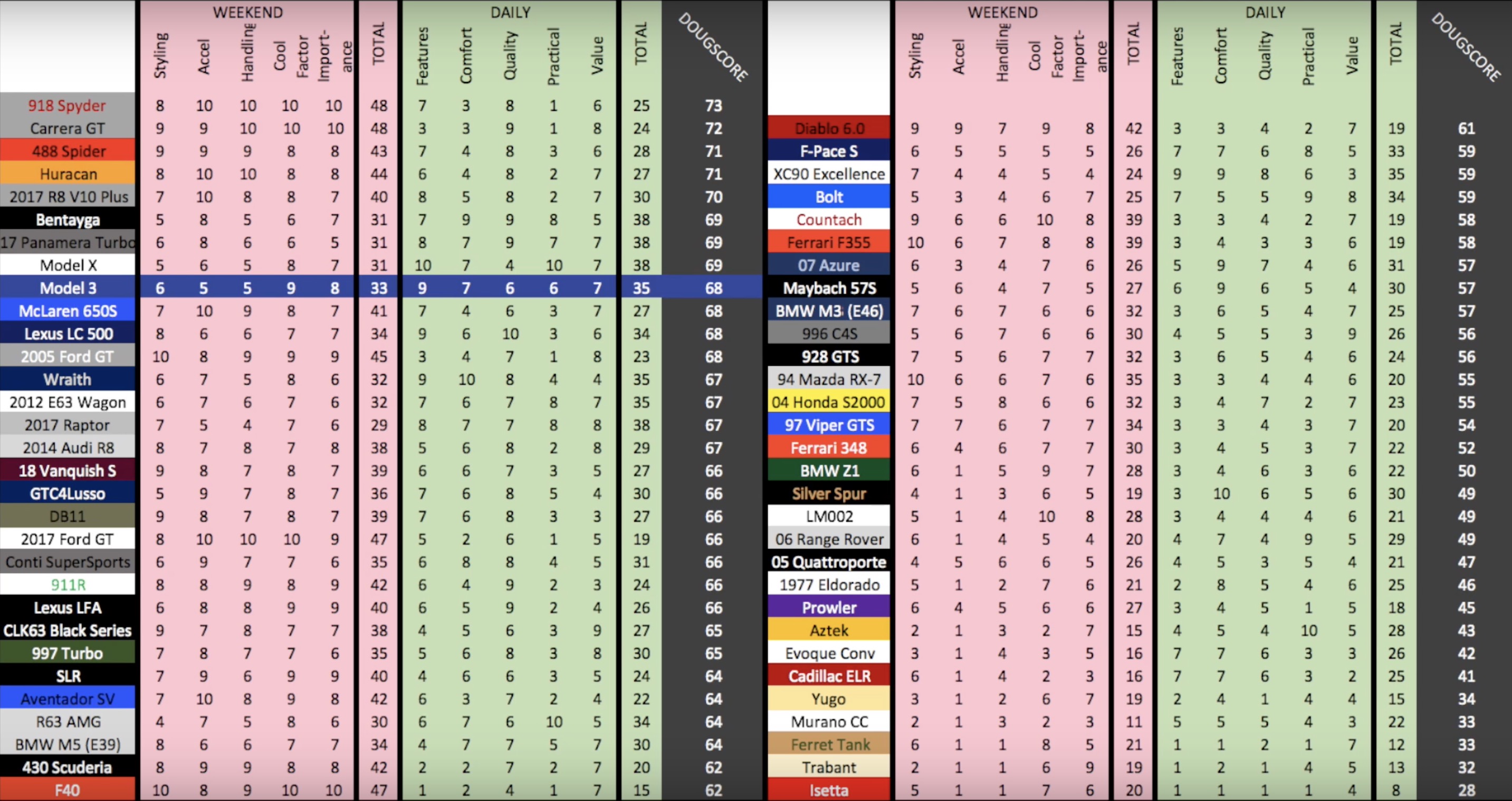 He looked at the car from a perspective of a mid-luxury sedan to compete with the likes of the BMW 3 Series and Mercedes C-Class and while he is clearly not as impressed by the design as a lot of people have been so far, Doug seems to see the vehicle as a serious competitor in the segment.

A lot of things that he likes about the Model 3, like the instant torque, quiet ride, and high-tech features, are already in the Model S and Model X, but the Model 3 brings those to a new class of vehicles while leaving the crazy high performance to its predecessors.

Doug is also a good reference for comfort based on size since he is 6’4″ and he notes no issue with sitting comfortably in the front or back seats of the Model 3.

His biggest takeaway for Model 3 reservation holders is that the car is worth the wait. The timing is good since Tesla recently confirmed that some will have to wait a little longer because of bottlenecks in the production process.