Tesla’s stock (TSLA) tumbled on Model 3 delay and EV tax credit fear, but here’s what you need to know

All the information Tesla dropped on investors and analysts this week with their third quarter financial results is being processed by the market right now, and the market unsurprisingly doesn’t like it.

Tesla’s stock (TSLA) took a 7% hit down to $300 per share yesterday, but beyond Tesla’s quarterly results, it looks like the announcement that the GOP plans the remove the $7,500 federal tax credit for electric cars also hurt the stock a lot.

Here’s what you need to know:

The stock had lost 3 to 4% of its value in the morning following Tesla’s announcement that it was delaying its planned production of 5,000 Model 3 vehicles per week from December 2017 to “late Q1 2018”.

CEO Elon Musk said that he expects Tesla to still produce “a few thousand” Model 3 vehicles per week by the end of the year.

We are talking about at least $1 billion in revenue from the Model 3 program delayed by a quarter. It’s understandable that the market would react badly to the delay.

But then the stock tumbled another 3-4% following the confirmation that the GOP included the removal of the federal tax credit for electric vehicles in its House tax bill. 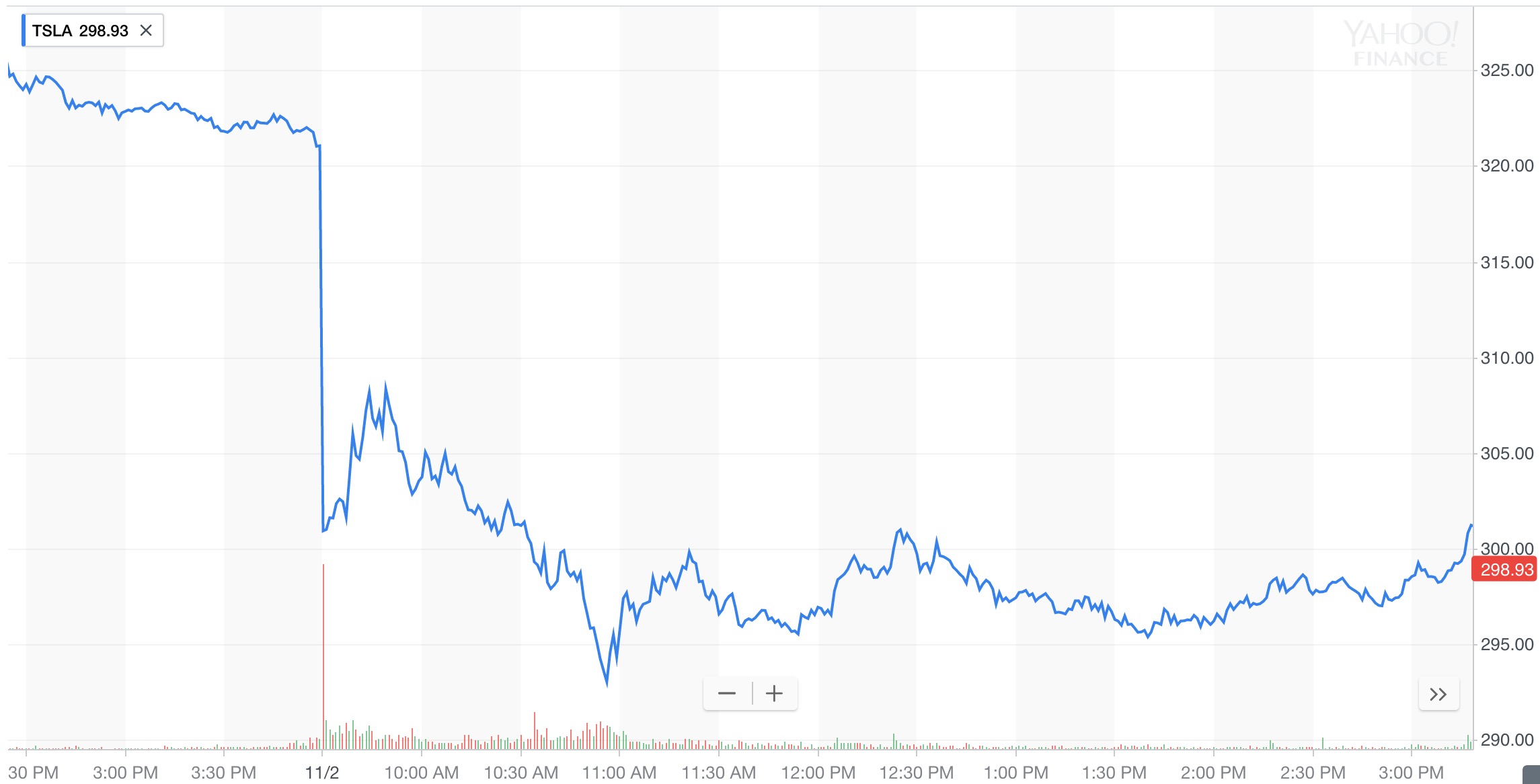 Let me start by making it clear that the potential end of the federal tax credit is bad news for electric vehicles in US in general. There’s no doubt about that.

The only way it makes sense to remove EV incentives right now is if penalties are added to pollution-emitting vehicles in order to account for their unpriced externalities, but that’s apparently not remotely in the GOP’s plan, so it’s a clear attack on electric vehicles in order to satisfy those with interests in fossil fuels.

If you want to fight against it, Plug In America is putting resources together and it’s probably a good place to start. We also made a post on how to approach buying an EV in the US under this potential threat.

Now about the potential impact on Tesla’s business, I would actually argue that it will have a positive impact.

It’s something that CEO Elon Musk argued a while back and it makes sense. He said back in May:

“Tesla has succeeded in spite of the incentives not because of them. These incentives have limited lifetime and limited scale, like for example, the federal tax credit caps out at 200,000 (vehicles), and the CARB credits, which because the CARB rules are relatively weak, we can’t sell. There are some quarters where we can’t even sell CARB credits. And when we can, it’s maybe $0.50 on a dollar or something like that, whereas the other car companies get to fully absorb the value of the CARB credit. So just for example gives GM roughly – from my count, $7,000 to $10,000 advantage over Tesla for their Chevy Bolt.”

When talking about CARB credits, he is referring to the fact that Tesla only sells EVs and therefore, it can only recognize the value of the credits by selling them at a discount to other automakers.

On the other hand, automakers who primarily make gas-powered cars but also a few EVs, like GM with the Chevy Bolt EV, can recognize the full value of the credits earned by those EVs as it subsidizes the sales of their gas-guzzlers in California and other CARB states.

That logic is true for CARB credits, but there’s also a parallel with the federal tax credit.

If it stays in place, Tesla is going to reach the 200,000 vehicle cap way ahead of the competition. A full year ahead of GM and Nissan, according to my own estimate, but more importantly, years ahead of companies like Audi and Mercedes-Benz, which are Tesla’s true competitors and only plan to launch premium EVs in the next 2 years.

Tesla will have long run out of federal tax credits at that point and those automakers will get a great competitive advantage for being late to market with premium all-electric vehicles.

Now, there’s no doubt that some Model 3 reservation holders were counting on the tax credit to buy the Model 3 and that will hurt Tesla’s sales in the short-term, but overall it’s likely to advantage Tesla in the EV market in the US, which will take a hit as a whole if the tax credit is removed.

Ultimately, technological advancements are going to make gas-powered cars uncompetitive with electric vehicles regardless of incentives. It’s inevitable and likely to happen within the next 5 to 10 years in my opinion.

But in the meantime, EV incentives are preparing and accelerating this market transition. If they are removed, it will simply slow down the process in the US while the rest of the world moves forward.