Out of all the modes of transportation to electrify, seacraft have been somewhat overlooked even though they should actually be a priority due to the disproportionate amount of pollution they emit.

Now it looks like electric boats could also be ready for the primetime after the latest record of the Wye Island Challenge, an annual electric boat marathon in Maryland, was crushed by a new startup earlier this month.

The Wye Island Challenge is an electric boat race organized every year by the Electric Boat Association of America (EBAA). They describe the course:

“The 24 mile course encompasses 8 miles of relatively open water at the mouth of the Miles River where it empties into the Chesapeake Bay, and 16 miles of sheltered water of the Wye River which circles picturesque Wye Island.  Including a significant amount of open water in the course assures the boats have real world capabilities while the sheltered water section provides an enjoyable and interesting ride.”

It serves as an interesting benchmark to follow the progress of the technology as competitors break the previous records with new and improved electric powertrain technologies.

In that regard, this year’s race was especially interesting because the new record time was over 25% faster than last year’s record.

Seattle-based Pure Watercraft participated in the race with its new electric outboard motor and battery pack system, called Pure Outboard, and finished the race in 1 hour 10 minutes – a solid 25 minutes ahead of the previous 1h35m record.

Their lead was so impressive that it resulted in quite an anticlimactic end of the race as the organization wasn’t prepared to receive and celebrate the winners when they arrived. Here’s a quick video of the race:

Electrek talked to Pure Watercraft founder and CEO Andy Rebele about the achievement. He attributes the dominance of the Pure Outboard, which they have been working on since 2011, to its power and energy density.

The Pure Outboard can be configured with several 6-kWh battery packs, which are swappable and chargeable via regular 110-volt outlets or a more powerful external charger designed by Pure Watercraft, and the actual outboard electric motor. For the race, they fitted 4 battery packs for a total 24 kWh battery system on a Still Water Design “Duo” hull boat. 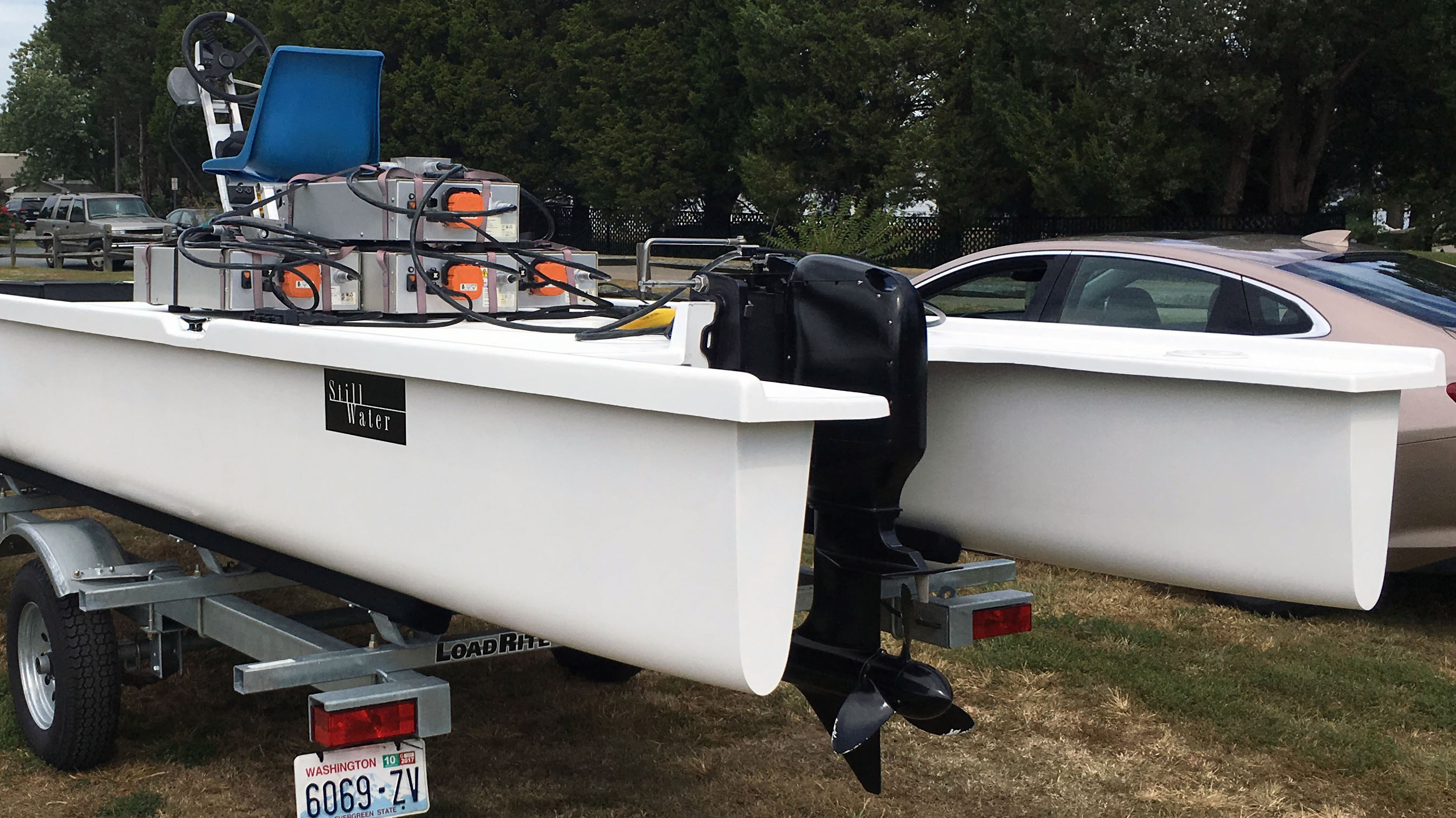 It looks quite rudimentary, but it serves as a great showcase of their system and as it turns out, the 24 kWh battery pack was overkill.

They could have used half the packs, which are made with 18650 li-ion cells (not unlike Tesla’s battery packs though with a NMC chemistry instead of NCA), and they could have still won the race by reducing their cruising speed.

The motor can fit virtually any boat made for outboard motors and a single battery pack is made to fit where a gas tank would generally be installed on a boat. Additional packs will need more creative solutions, but places like under seats are easily feasibly, said Rebele.

They use the water for passive cooling in order to keep the electric motor at an optimal temperature, but they also run a closed loop cooling system running alone the strut to again use the water to cool the rest of the system that is not submerged.

After 6 years of working on the system and the new achievement at the race, Rebele says that Pure Watercraft is now ready to bring Pure Outboard to market. 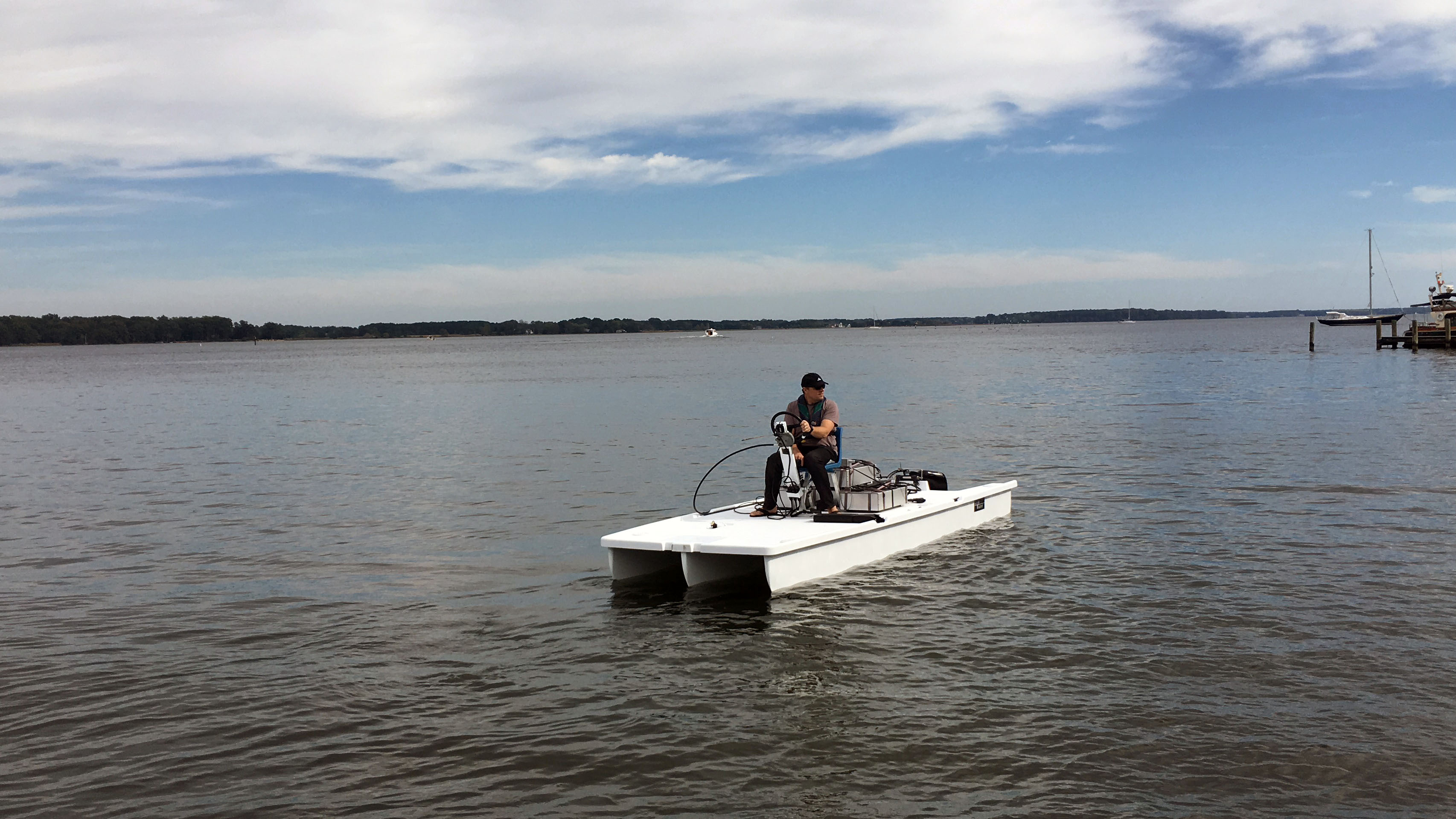 They plan to start manufacturing the Pure Outboards at their Seattle facility in December and start shipping their first systems to customers during the first quarter 2018. They are taking pre-orders right now with a $500 deposit. Rebele says that a basic 1 battery pack Pure Outboard will cost about $12,000. A 2-battery pack systen will go up to about $18,000.

It is certainly more expensive than your average gas-powered outboard motor. But, when accounting for gas and maintenance savings, it can end up fairly equivalent after a few years depending on the usage, but that’s not really where Pure Outboard shines.

Gas-powered outboard motors have a bad reputation for not lasting long without frequent maintenance and part replacements. With a lot of motors only being under warranty for 4,000 hours and a few years, Pure Watercraft has the opportunity to take advantage of the reliability of electric motors to make a durable system.

When talking with Rebele, he said that they haven’t announced any warranty yet, but he hinted that it would make gas-powered outboard motors look [more] pathetic.

As folks with sailboats know, the difference in experience when you go from loud motor to sail is one of the best parts of the experience. The electric engines will make it feel like they are always under sail.

For those people who want to sail around the world in smaller craft, outfitting the boat with solar panels and these battery/engines could make the mess of having a diesel backup a thing of the past.

We are already seeing some rivers and lakes banning gas-powered watercraft and with those electric systems becoming more commonplace, it’s likely to become easier to implement those bans.