American electric bus maker Proterra made two important announcements today. The company unveiled its new dual motor all-electric drivetrain and it confirmed that it has been selected to make the electric powertrains for Van Hool’s first all-electric coach.

The bus maker confirmed that their recent 1,100 miles on a single charge record was achieved with the new system, which they introduced at the American Public Transit Association (APTA) Annual Meeting today:

“Designed for durability, Proterra’s DuoPower drivetrain features two electric motors that deliver an impressive 510 horsepower, accelerating a Catalyst bus from 0-20 mph in 4.5 seconds, while also achieving an industry-leading 26.1 MPGe. In addition, it can propel a bus up a 26 percent grade, which is more than twice the performance of the average 35- or 40-foot diesel bus, and 72 percent better than competing electric transit vehicles, making it an ideal option for transit agencies with steep hills.”

Here’s the impact of the new system on their 40-ft bus and in comparison to the competition: 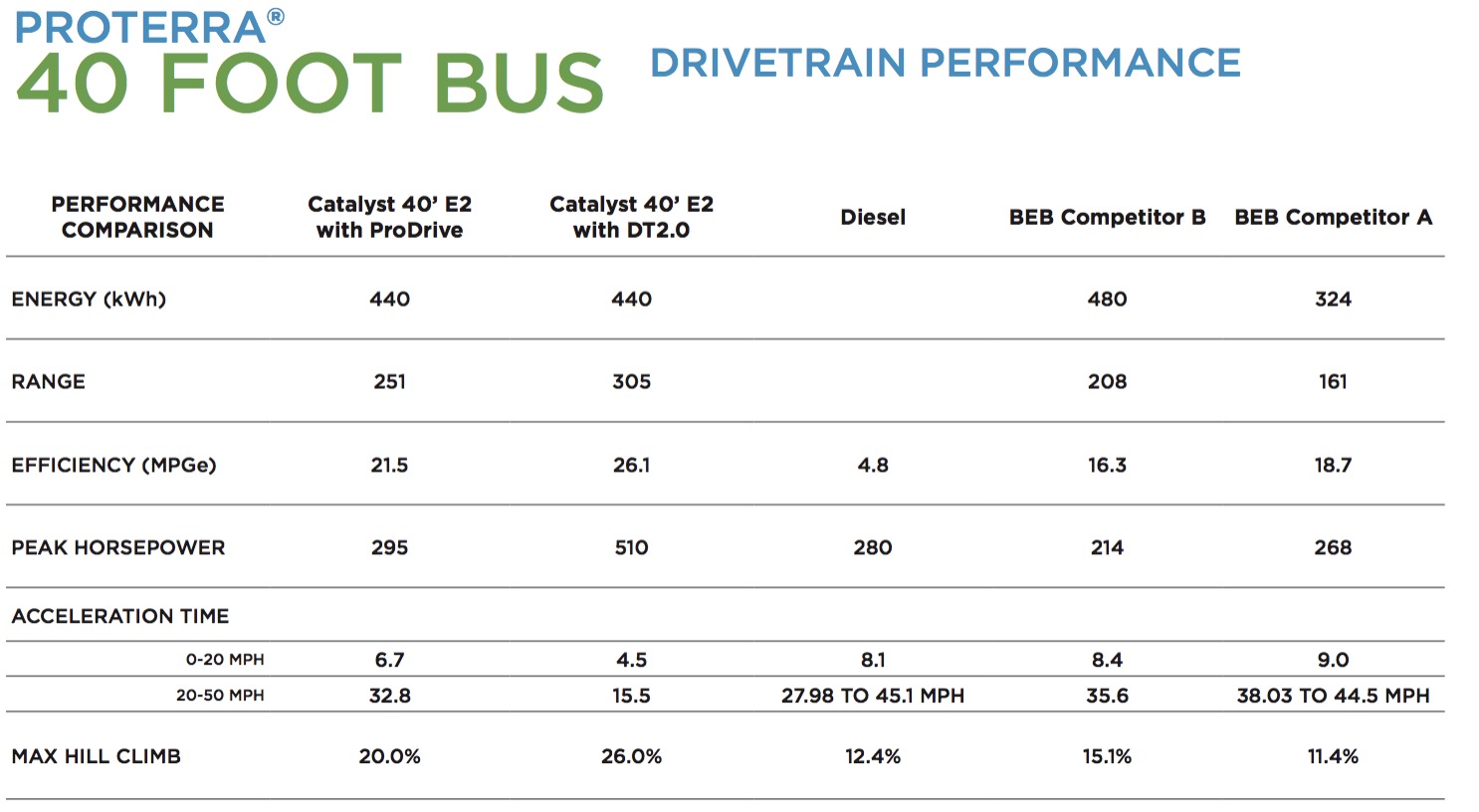 Ryan Popple, CEO, Proterra, commented on the significance of the addition to their lineup:

“When Proterra originally introduced EV technology to the transit industry, we proved that EVs could compete with fossil fuel vehicles, and replace diesel buses in most cities. But we didn’t stop there. We continued to innovate, and today we’re announcing a drivetrain that completely outperforms an internal combustion diesel or CNG engine in every major performance category – efficiency, reliability, acceleration, hill climb and passenger-carrying power. In transit, state-of-the-art vehicle performance is now defined by EV technology like our new DuoPower driveline. For fleet customers that want the very best speed, power, energy efficiency and reliability – EV is the answer.”

Proterra’s solutions were mainly used for city transit, but the more powerful powertrain will enable them to venture into the coach business.

“Van Hool is truly excited and proud to partner up with Proterra, a pioneering company in the development and production of battery technology. The diesel CX45 coach has a proven track record and has become a benchmark coach in its own right in the industry. Integrating Proterra’s proven battery technology in the CX will take this coach to the next level. It is a clear statement as to Van Hool’s long-term commitment to the North American coach market and a testament to Van Hool’s responsiveness to the overall demand for zero-emission vehicles at large and over-the-road coaches in particular.”

They expect the first buses to be ready for deliveries in 2019.