Now Tesla unveils the red ‘Founder series’ Powerwall 2 and prepares deliveries for the winners of the referral program.

Normally, Tesla’s ‘Founder Series’ products are the first to be delivered, but that wasn’t the case for Powerwall 2.

Tesla already delivered thousands of Powerwall 2 battery packs, as we reported yesterday, and now they are offering this ‘Founder Series’ unit as part of a fairly old referral program.

The automaker offered this prize as part of the October 2016 to January 2017 round of the referral program.

At the time, they described the prize:

“Those who make 7 or more qualifying referrals will receive an exclusive red Founders Series Powerwall 2.0, hand signed by Elon Musk, JB Straubel, and Franz von Holzhausen. This limited edition Powerwall is not available to the public.”

Those Powerwalls have been won months ago, but Tesla also included the red Founder Series Powerwall 2 in the prizes of more recent referral program rounds – though they stop making mention of signatures by Elon Musk, JB Straubel, and Franz von Holzhausen.

Here’s the email that they sent to referral program winners yesterday: 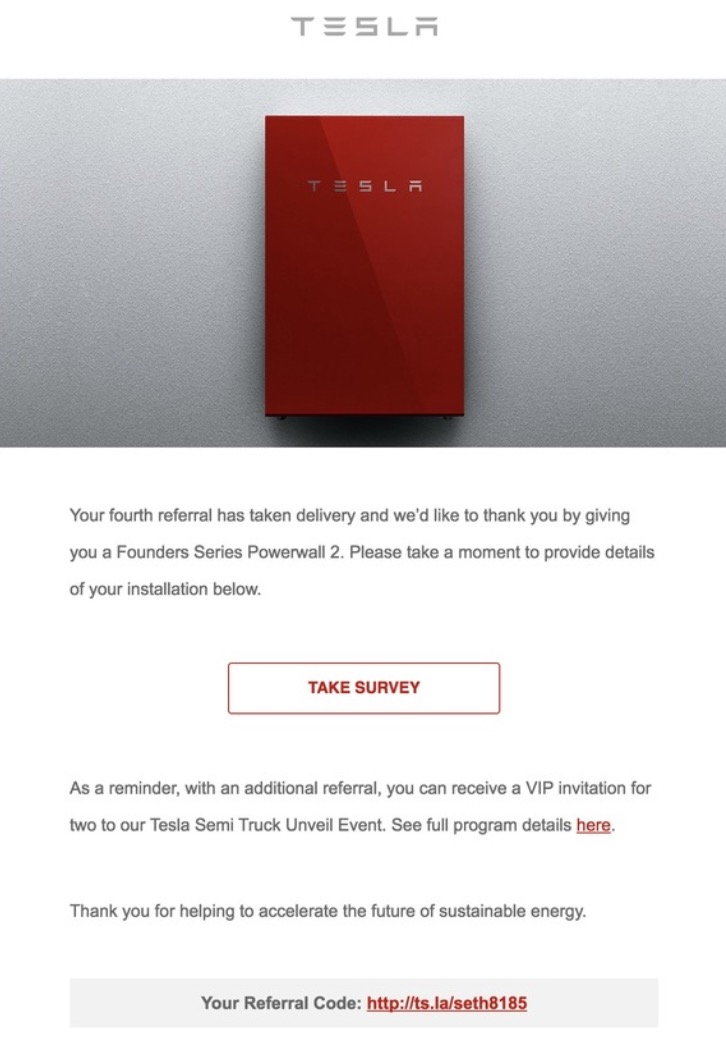 Due to the changes in the referral program over the last 4 rounds, likely hundreds if not thousands of Powerwalls have been won through the program. Their deliveries alone should have an impact on the total deployment of the residential battery pack.

Tesla delivered the Powerwall 2 to about 2,000 projects in California over the last year and it started deliveries in a select few markets in the US, Europe, and Australia.