Tesla is again showing more signs of preparation for the expansion of Model 3 deliveries to customers. As we reported this morning, the automaker is working on its Model 3 online design studio.

Now Tesla pushes a new update to its mobile app to support Model 3.

The mobile app is already useful for Model S and Model X, but it will be even more important with Model 3.

With the Model 3, Tesla is parting ways with using a regular key fob and instead built the experience around its mobile app.

Tesla’s iPhone and Android app can already be used to unlock and start Model S and Model X, but the key fob is generally regarded as the main device to get in those cars.

The app now becomes the main device for Model 3, which is Bluetooth connected to your phone in order to automatically unlock the doors as you approach, much like it does with the key fob on the Model S and Model X today.

In order to unlock the car with the current app, the driver needs to go into the app or the Tesla widget to unlock it.

But with Model 3, once your car is linked to your account, you just have to walk up to it.

Today, Tesla pushed update 3.2 of its mobile app and it now “supports Model 3”, according to the update notice: 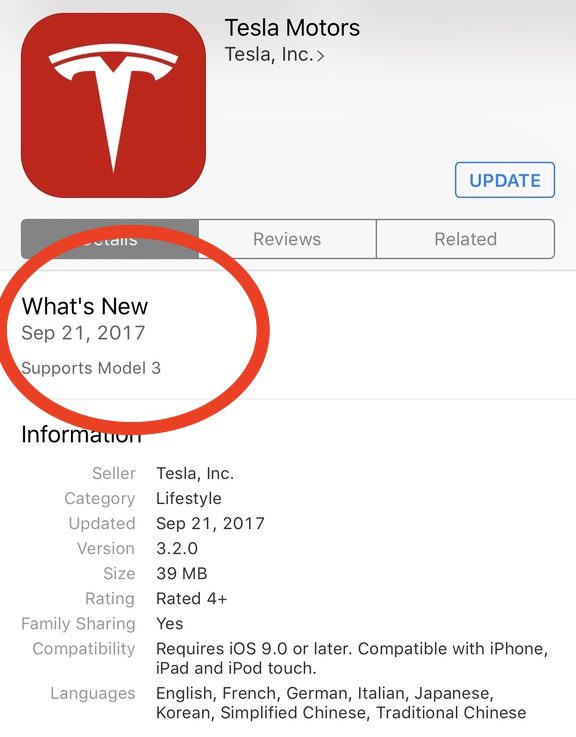 Now Tesla already delivered cars to employees and company insiders since July. Presumably, they were using a beta version of the app or they were simply relying on the backup key card.

Tesla provides a keycard with a NFC chip and the driver has to swipe the card on the B pillar to unlock the doors.

With the app now supporting Model 3, Tesla is one step closer to the broader rollout of the vehicle, which is expected to start being delivered to regular reservation holders (not employees or people close to the company, like investors) at the end of October.

Also, it looks like Tesla’s mobile app is becoming increasingly important. Earlier this year, the company issued another update to support not only its features related to its vehicles but also support for its solar and Powerwall installations.