The completion of a new highway was part of Tesla’s deal with the state of Nevada when they chose Sparks for the location of their first Gigafactory to produce batteries.

Now the automaker brought a new Model 3 to inaugurate the ‘game changer’ highway near Gigafactory 1.

Nevada Gov. Brian Sandoval was present for the inauguration of the highway yesterday. He said (via the Las Vegas Review Journal):

“The opening of USA Parkway will transform the region’s transportation capabilities. Now the millions of goods made in or distributed from Nevada will be able to move more swiftly and with greater ease.”

The new route is expected to facilitate the logistics of operating in the Tahoe-Reno Industrial Center by connecting the two important highways with a new 18-mile stretch of road. Here it is in purple: 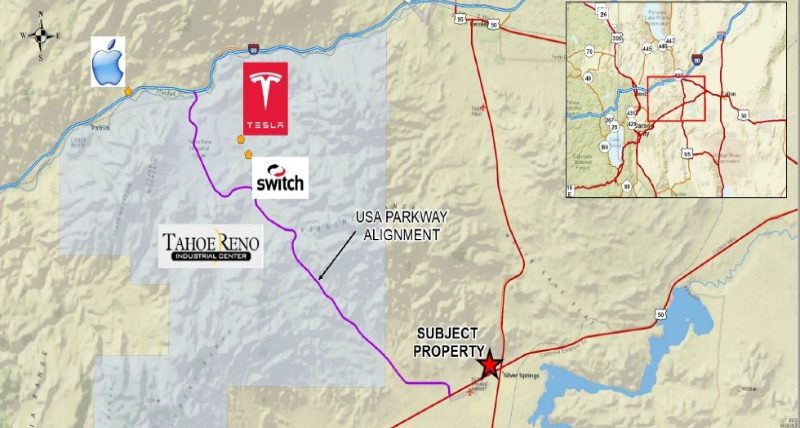 The road should simplify the supply chains of the companies in the Tahoe-Reno Industrial Center and it comes just in time for Tesla, which is about to significantly increase the output of Gigafactory 1 to support the production of the Model 3.

It’s only appropriate that one of the early production Model 3 inaugurate the highway, which will officially be open to the public next week.

Tesla also brought a Model S and a Model X, along with the Model 3 to the event.

The output of Gigafactory 1 is all going down the I-80 to Tesla’s Fremont factory in California, but the new project could still help the company’s significant input of materials to produce the batteries and Model 3 drivetrains.

Tesla CEO Elon Musk recently said that Gigafactory 1 has ‘gigantic’ logistic costs and he is even considering a hyperloop project to address the issue.

The new road is also a game changer for people working s in the Tahoe-Reno Industrial Center. Tesla Gigafactory employees so far had to live in towns along the Interstate 80, mainly Reno, but now a commute to Silver Springs will be more manageable – increasing the options for workers.

Over 1,000 people already work at Gigafactory 1, but Tesla expects the workforce to grow significantly as they ramp up production. The company previously guided up to 10,000 employees when at full production around 2020.