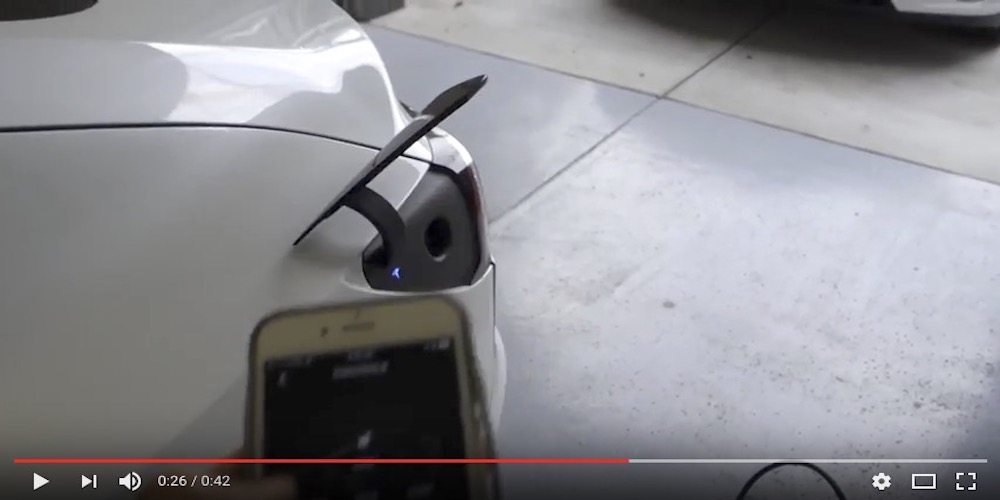 When we got our test drive/rides in the Model 3 a week ago, many of the finer details of the groundbreaking EV were still off limits.

The Model 3s were all being charged via the company Superchargers outside of the VIP/Press area so we didn’t get to experience what it was like to plug in the vehicles or even operate the app.  However, Tesla Board member and venture capitalist Steve Jurvetson this morning showed his YouTuber skills in demonstrating the feature on his VIN#5 Model 3.

The flap works mostly how you’d expect. The included charger cable (no amperage listed but on board charging is 32A and 40A for base and long range models respectively) button opens the Model 3 charging bay in the same way that it works for Model S and X. The charging bay is much bigger however and a curious design choice. It looks almost big enough to accept a CSS combo port, not that is in the cards, but just a curiously large amount of space for such a small Tesla interface. Even more curious when we know that Tesla minimizes everything

Moving on, perhaps the most interesting, though not entirely unexpected bit is that the charge bay door can be closed by the app. There was concern that this would be a manual door latch like the early Model S/X but this looks like launch for Model 3.

You can drive a Model S or X around with the charging flap open but I would imagine that the Model 3’s bigger flap could get dangerous at high speeds, so a motor, automatic and otherwise, to bring the door down might have been a necessity there.

I took some photos of cool features of the Tesla #Model3 VIN #5 today and at the launch event last night: https://t.co/UUYy4Wz9YB pic.twitter.com/OcwlxsESbs

Lastly, I’m in full agreement with Jurvetson on the white color choice. How about you?