With the release of its second quarter 2017 after market close today, Tesla gave several updates on its Model 3 program following the launch last week.

The company says that the response to the vehicle has been “overwhelming” and now they put their efforts into producing the product.

In its shareholders letter, the company gave some insights into the current access to the Model 3 online configurator:

“Since the handover event last week, we are averaging over 1,800 net Model 3 reservations per day. We opened the Model 3 configurator to the thousands of our employees with reservations so they could begin ordering their vehicles. Soon, non-employee customers will begin receiving invitations to order their cars in small groups based on when they placed their reservations, with existing Tesla owners receiving first priority. Deliveries to non-employees will begin in Q4.”

1,800 new reservations per day would mean about 9,000 since the launch, which may not seem like much, but that’s net of cancellations and some were claiming that Tesla would see a lot of those following the event, which either didn’t happen or Tesla got enough new orders to balance it out.

Tesla also shared some information about the manufacturing process:

“At our Fremont factory, the new Model 3 body welding line and multilevel general assembly line are highly dense and automated. This densification sets the stage for us to produce over 500,000 Model 3 vehicles annually. Model 3 drive units as well as battery packs made with our proprietary 2170 form factor cells are being built on new lines at Gigafactory 1. We are now fine-tuning these manufacturing lines to significantly increase the production rate.”

They shared a picture of the Model 3 Body Welding Line: 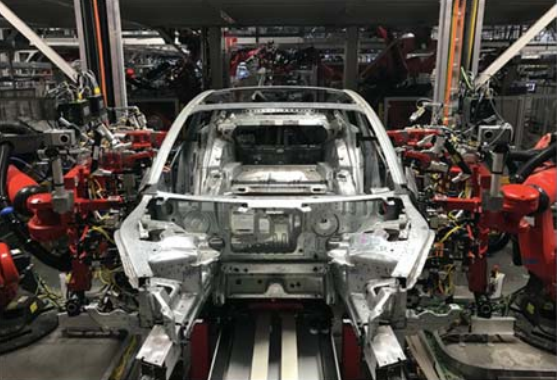 After delivering the first few cars last week, Tesla now says that it aims to deliver roughly 1,500 Model 3 vehicles during the current quarter (July through September):

The company expects Model S and Model X to remain the main sale drivers for the second half of the year. To alleviate concerns that the launch of Model 3 would slow down sales of its flagship vehicles, the company disclosed that the “weekly net order rate for these vehicles was about 15% higher than the Q2 average weekly order rate.”

The vehicles will help fund the production expansions for Model 3. The company disclosed having spent $959 million in Q2, as they invested in “Model 3 capacity in Fremont, in Gigafactory 1, and in the expansion of their customer support infrastructure.”