Now that we finally got a look at the final production version of the Tesla Model 3, albeit from limited angles (though a few more in this video), we can clearly see some of the changes that Tesla has implemented to the vehicle since the pre-alpha prototypes shown in March 2016.

Some of those changes were already seen on Model 3 release candidates, but those vehicles were often at different stages of development so now we have the real final product.

The most obvious change is the front end which appears sharper and not as flat as what was shown on the pre-alpha prototypes just over a year ago.

A side-by-side view of the vehicle’s profile seems to show the peak of the fascia being lower on the production unit (right) than on the prototype (left):

The rear bumper also appears to extend longer on the production unit than on the pre-alpha.

Those changes appear to be aimed at better aerodynamic performance, which would make sense since CEO Elon Musk said that they were aiming to achieve a segment-leading drag coefficient of 0.21.

If they achieved it with those changes, it would help make the vehicle more efficient, especially for highway driving, which would, in turn, result in a longer range and lower cost of operation.

Here’s another angle of the pre-alpha prototype (left) and the new production unit (right):

Another obvious difference between the vehicles is the Autopilot hardware suite on the production unit.

When Tesla introduced the new hardware suite, which includes 8 cameras, 1 radar, all-around ultrasonic sensors, and a Nvidia Drive PX2 computer, they said all future vehicles will be equipped with it, including the less expensive Model 3.

But those were also seen on the Model 3 release candidates.

The proportions of the car also seem to have changed since the pre-alpha prototype. If we look at both vehicles at scale based on the size of the mags (assuming both are 19″), the changes become more evident: 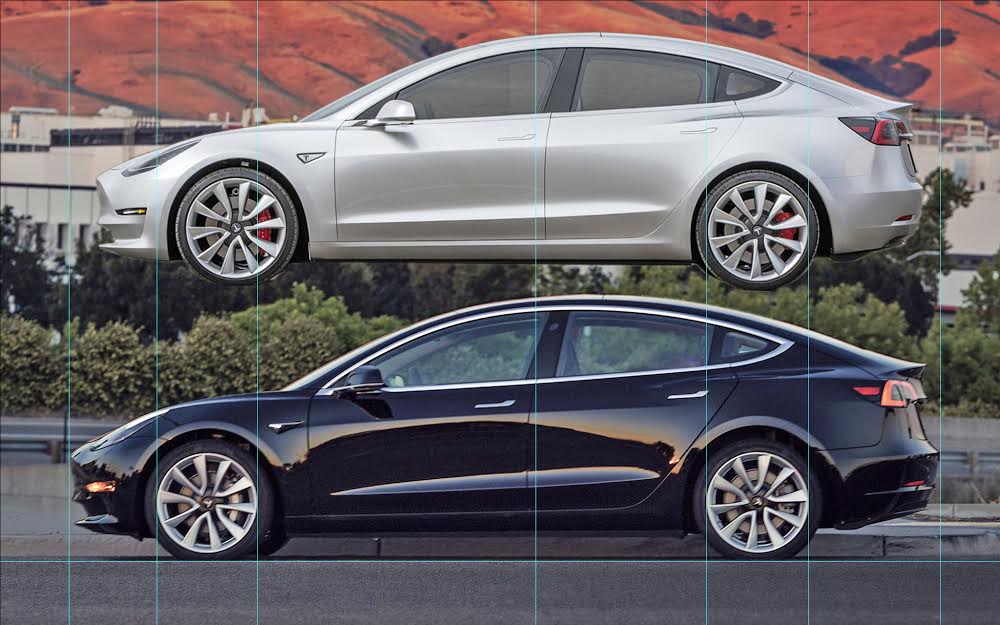 There are also a few other little design features that are more pronounced on the production version, like the fenders around the wheel wells, the larger door handles, and the fog lights.

Let us know what you think in the comment section below. Do you prefer the pre-alpha or the production unit?