Tesla has opened the floodgates of Autopilot data gathering

Self-driving cars are now a software and big data problem. Most of Tesla’s competitors in the field are working on expanding their test fleets in order to gather more data. GM announced yesterday that it is adding 130 autonomous Chevy Bolt EV prototypes to its test fleet and Waymo recently deployed 500 self-driving Pacifica hybrid minivans in Phoenix.

Tesla is going a completely different *route* by using its large fleet of vehicles already in the hands of customers to gather data, which is especially significant with its vehicles equipped with second generation hardware.

Today, we’ve learned that the automaker’s latest policy change has enabled gathering videos from those vehicles which is really opening the floodgates of Autopilot data gathering.

When releasing an Autopilot 2.0 update last month, Tesla also asked owners for the authorization to collect videos from the Autopilot cameras.

They wrote in the message at the time:

“We are working hard to improve autonomous safety features and make self-driving a reality for you as soon as possible.

In order to do so, we need to collect short video clips using the car’s external cameras to learn how to recognize things like lane lines, street signs, and traffic light positions. The more fleet learning of road conditions we are able to do, the better your Tesla’s self-driving ability will become.

We want to be super clear that these short video clips are not linked to your vehicle identification number. In order to protect your privacy, we have ensured that there is no way to search our system for clips that are associated with a specific car.”

That change (17.17.4) was pushed on May 7 and it matched a significant increase in the data uploaded from Tesla hardware 2 (HW2) cars (image via kutrod): 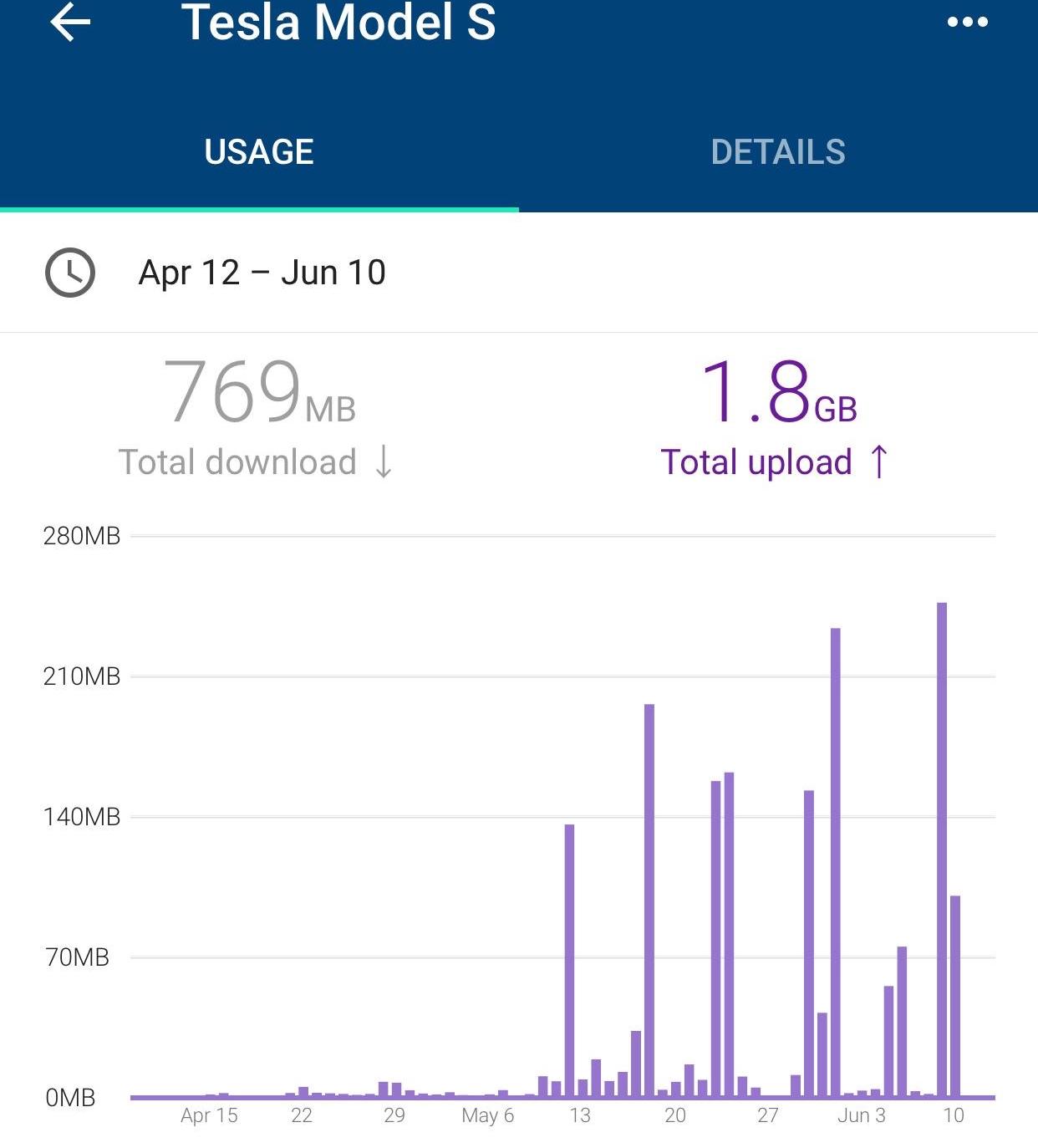 The data was singled out to be from a Model S through Google Wifi app and several other reader/owners also reported similar upticks after accepting the 17.17.4 update. Of course, the bandwidth varies based on what network it’s being sent from – meaning that some owners can track their home network, but not the data sent from the in-car cellular connection, which is covered by Tesla and managed by AT&T in the US.

It shows that while Tesla has HW2 cars on the road since October 2016, the company really only started meaningful data gathering since this update last month.

It also means that Tesla’s deep learning neural net is ready to work through more data and it’s not too far-fetched to expect further significant improvements to Tesla’s Autopilot following the change. With the latest Autopilot 2.0 update that Tesla started pushing this week, the system is only now starting to reach parity with the first generation Autopilot.

Therefore, the transition from current Autopilot features to what Tesla has been calling ‘Enhanced Autopilot’ should be starting soon.

Interestingly, we also get an idea of the kind of data that Tesla is gathering from its vehicles after an owner managed to access the Autopilot debug mode last month.

Here’s what Tesla’s Autopilot 2.0 can see with its 8 cameras

It sporadically and seemingly at random (though that’s not clear) sends out snapshots from 7 of the 8 cameras (10 pictures at 1fps from each camera) and 10 seconds of images at 30fps from the main and narrow front-facing cameras – coupled with a radar snapshot.

At this point, Tesla has likely well over 50,000 vehicles on the roads gathering this data and depending on the production ramp up of the Model 3, it could potentially double that by the end of the year.

CEO Elon Musk said earlier this month that Tesla still plans to demonstrate level 4 autonomous driving in a coast-to-coast drive using those vehicles in production by the end of the year. Those recent changes are starting show how they plan to make that happen.