Ford’s Model T is credited for creating a transportation revolution by making the first affordable and truly mass-produced car.

Tesla is trying to do the same thing with electric cars, which make for an interesting comparison to track their respective progression.

Ford really started to make a difference when Model T production started to reach high volumes. In the 1920s, they reached an insane production rate of over 1 million units per year.

But like anything else, that took a while to achieve.

They started producing the car in late 1908, but they only reached an annual production rate of over 100,000 units 5 years into production. 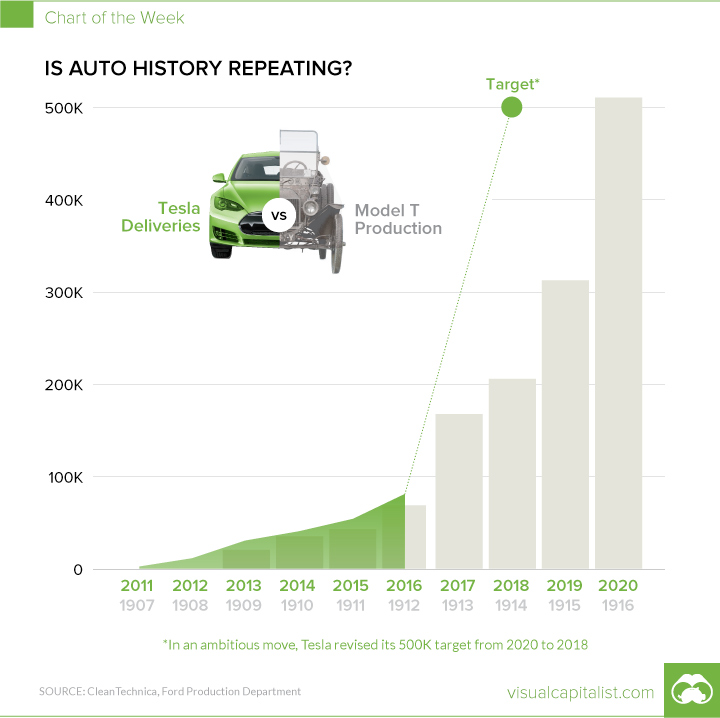 Tesla has been tracking ahead of Model T if you track it from the start of Model S production.

As we previously reported based on Tesla’s part orders, the company would need perfect production execution in order to deliver 80,000 Model 3s in 2017.

Therefore, there’s still a possibility for Tesla to keep track in 2017, but it’s almost impossible. The automaker has a better shot in 2018, which will be the Model 3’s first full year of production.

Visual Capitalist makes an interesting link between the Model T’s impact on US road infrastructure and the possible impact of Tesla’s growing fleet of EVs:

“Ford’s assembly line and uncomplicated design allowed for cheaper pricing, which helped Ford sales to take off. With many new Model Ts hitting the road, the United States government was able to generate enough revenue from gasoline taxes to enable the sustainable development of roads in the United States.”

They suggest that it could have a similar impact on the US’ electric vehicle charging infrastructure:

Tesla recently announced an important expansion of Supercharger network in order to support the arrival of the Model 3 and its growing fleet of Model S and Model X vehicles.

The timing is also interesting since VW will also have to deploy an impressive number of charging station through its DieselGate settlements. The plan for California includes installing ultra-fast 320 kW chargers, and the plan for the whole country includes a ‘nationwide 150 kW+ fast charging network’.

Those networks being deployed around the same time as the Model 3 will likely create a similar growth model as the Model T and the US road expansion. In other words, those next few years could significantly change the auto industry in the US.