Nissan is heavily discounting the LEAF with special deals for just ~$13,000 ahead of next-generation

The next generation Nissan LEAF has being spotted testing recently and it’s expected to be unveiled in September and be available shortly after. Sales could be rough for Nissan ahead of the launch as customers are waiting for the next generation, but they could still move inventories with special deals.

We have learned a few new ongoing special deals across several states that are bringing down the cost of a new Leaf to just ~$13,000.

Those deals are not exactly new, but they seem to be intensifying as of late and we have now received reports of active discounts in Indiana, Ohio, Kentucky, North Carolina, South Carolina and Florida.

It works through Nissan partnering with companies to promote a specific vehicle to its customers or employees, in this case the all-electric Leaf, and in exchange, Nissan offers discounts.

We are talking about discounts on the same level that Nissan has offered – and at times denied – with group buys in the past.

So far, we have received reports of deals with energy companies, like NextEra Energy in Florida, which adds up to $17,500 in incentive after adding the federal tax credit: 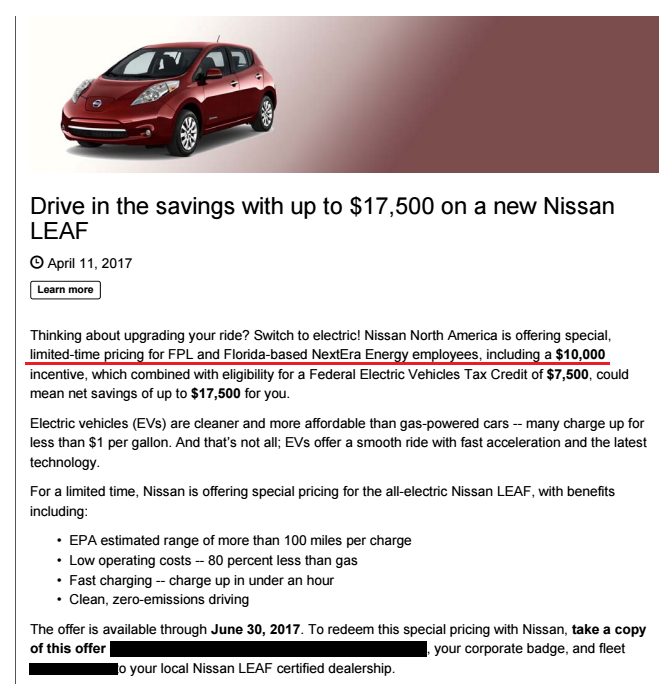 The deals are not only offered to employees. In the case of Duke Energy, it also applies to customers in Indiana, Ohio, Kentucky, North Carolina, South Carolina and Florida.

While most EV enthusiasts are waiting for the longer-range next-gen Leaf, the 2017 model with a 30 kWh pack can get ~107 miles of range on a single charge is more than enough for most commutes.  With a starting MSRP of $30,680, someone could technically get way with a base 2017 Leaf for ~ $13,180. It might be enough to convince some people not to wait for the next-gen.

We don’t know about all the deals, but we have seen enough that they should be pretty common now. You can reach out to a local dealer with Leafs in their inventories and ask them about similar deals in your market.

Here are the full details for the Duke Energy offer: