Tesla’s stock recently gained in value while Ford’s took a tumble and today it resulted in Tesla’s market capitalization surpassing Ford’s for the first time. Tesla closed at $45.47 billion today while Ford is now worth $45.35 billion, according to Google Finance, despite the latter selling 30x more cars in the US alone than the former delivers globally.

It is sure to create a debate in the auto industry and on Wall Street, but ultimately it doesn’t really matter since Tesla is not really just an automotive company anymore.

It’s something that naysayers have used for year now; that Tesla is an overvalued scam run by Elon Musk to keep raising more money on the stock market, like the company did just a week ago.

And the go-to argument to support that is that Tesla is valued at the same market capitalization as other automakers delivering a million vehicles per quarter while Tesla has yet to deliver 100,000 vehicles in a full year – and they do it while turning a profit, which Tesla has yet to do for a full year.

At its core, the argument makes sense since Tesla is still very much an automotive company based on the fact that over 90% of its revenue comes from the sales of vehicles and that is expected to stay true for the foreseeable future.

It makes it difficult to look at a chart like this showing that Tesla gained 41% in value over the last 2 years while Ford lost 29% even though Tesla just announced that it lost $680 million in 2016 while Ford made $10 billion: 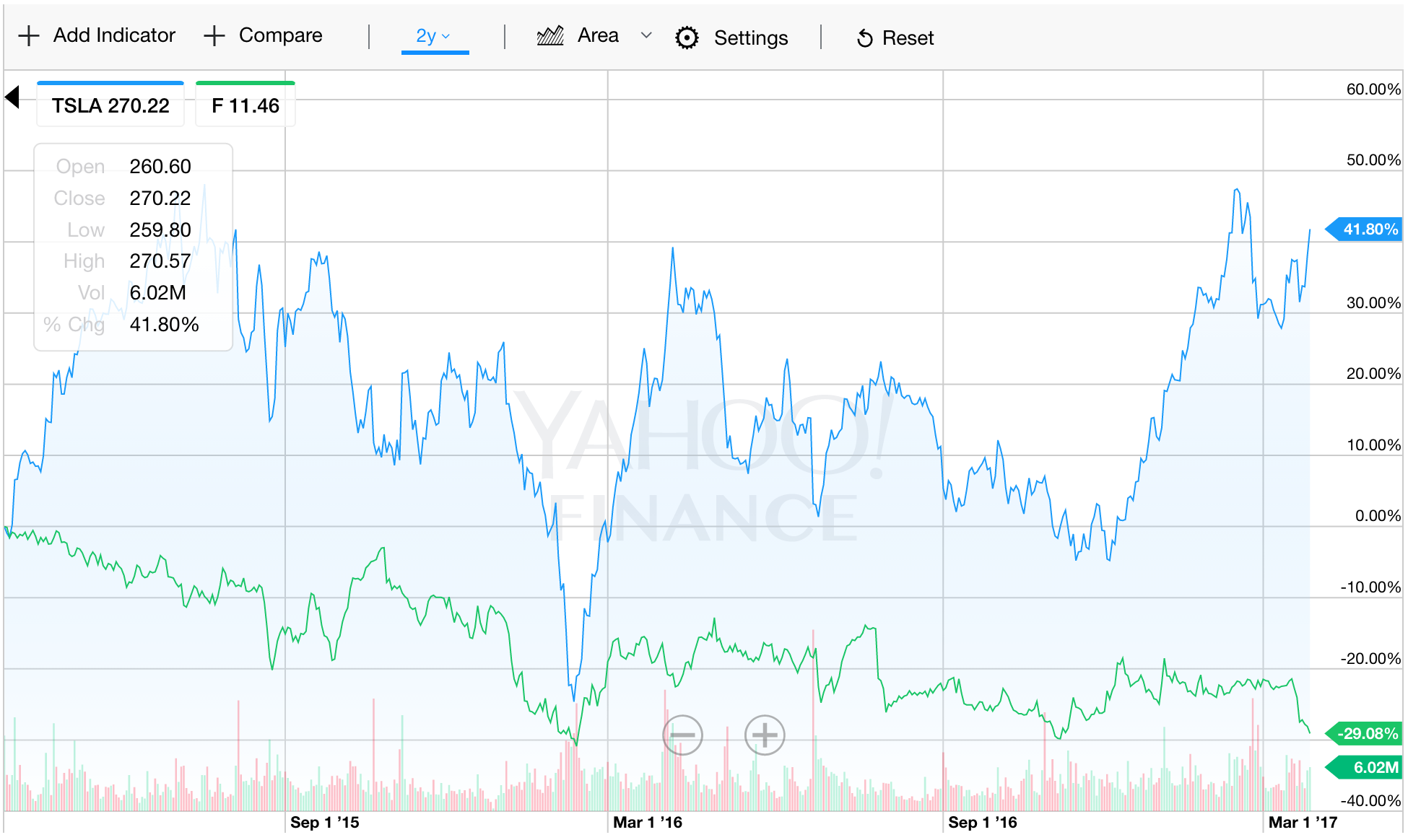 The difference is that Tesla is really not just an automaker anymore. The company recently acquired SolarCity, the largest residential solar installer in the US.

It might sound stupid right now to say that it is significant since they bought the company for $2 billion, which means that it represents less than 5% of its valuation, but it changes Tesla’s approach to the automotive industry.

Tesla is trying to own the entire energy process from generation to consumption. It wants its customers to not only buy its vehicles, but to also power them with energy generated through its own products (solar arrays), stored in its Powerpacks and Powerwalls, and charged through its level 2 chargers and Superchargers.

Therefore, if you want to make a comparison, it’s closer to an automaker who also owns an oil company and everything in between, like the refineries and gas stations.

In the context that the entire automotive industry is moving from internal combustion engines to electric motors, it’s a very strategic position to take.

In other words, people might disagree on Tesla’s valuation for plenty of valid reasons, but comparing the company to any other legacy automaker might not be the right way to approach it. Keep that in mind when you read all the headlines about Tesla surpassing Ford in market capitalization over the next few days.