Forty four year-old DeWitt Lambert, a production associate at Tesla’s Fremont factory, filed a lawsuit today against his employer for what he refers to as “a racially charged, sexually hostile and physically abusive environment.”

After being filed today, the lawsuit was sent out in a press blast to reporters. Tesla quickly responded to the claims made by Lambert and gave a different account of how the situation was handled. It follows another recently publicized lawsuit against Tesla over allegations of sexism and harassment

He claims that the events happened on “a continuous basis from the summer of 2015 to the spring of 2016” at which time he was transferred to a different production line. He kept working for Tesla, but he is now suspended with pay until Tesla concludes an investigation around his claims and claims made by other employees against him.

The main piece of evidence in the case is a video that Lambert’s coworkers filmed on his iPhone while on the assembly line. He claims that the content of the video, in which we can hear racial slurs and threats, is an example of what he was experiencing at work. Here’s the video (strong language warning):

The video was filmed in 2015, but Tesla says that the Lambert only showed the video to HR in July 2016 during a meeting when he was receiving a “final written warning for posting proprietary photos of Tesla equipment on social media against company policy”. An investigation was reopened over his claims, but Tesla says that the HR representative left the company two days later and no one took over.

6 months later, Lambert demanded “a very large payment” under the threat that he would file a lawsuit. At which point, Tesla started investigating his claims again and found:

“Once again, we looked into his claims and found that the co-workers Dewitt complained about described the situation very differently. They claimed once again they had all been friends and socialized outside of work, and that all of them (including Dewitt) used similar insensitive language with each other on a regular, ongoing basis, including in social contexts outside of the workplace.”

Based on interviews with Lambert’s colleagues, Tesla says that he made the accusation of racially charged and abusive work environment “because of his belief that these colleagues had turned a video into HR showing Dewitt threatening one of them”. Tesla shared a screenshot of a conversation with another employee to support that argument and the fact that he also uses the word “nigga”: 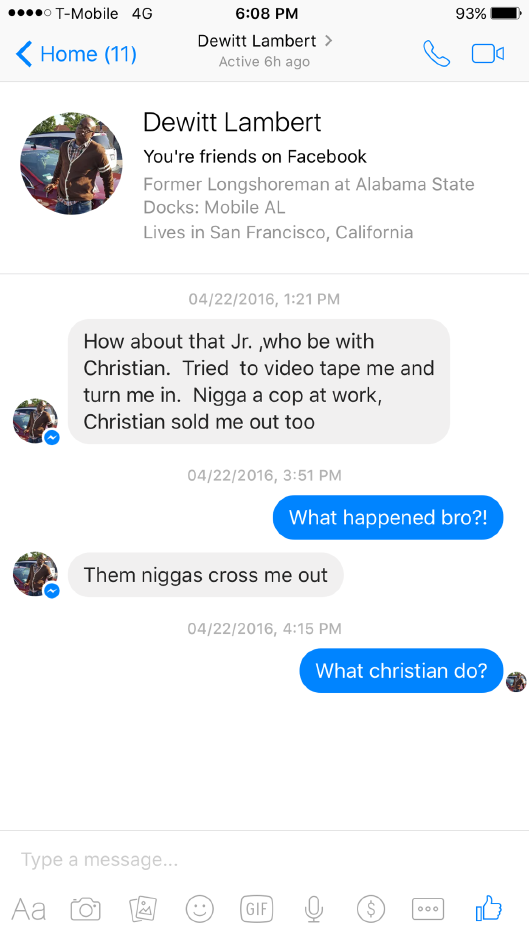 Tesla is still investigating the situation, but the company also says that it “terminated several employees” in relation with this case.

You can read the lawsuit in full at the end and here is Tesla’s response:

We believe strongly in having a good working environment and that people should look forward to coming to work every day. That means Tesla must always aspire to be transparent, respectful, fair and just. When we hear complaints or concerns raised by our employees, we take them very seriously.

A video recently came to light showing behavior by a group of employees at our factory acting in a way that we found disappointing and contrary to our values. It appears that a lawsuit is now being filed against Tesla in connection with this video. In the interest of transparency, we want to share what we know:

That brings us to today. We have been told by Dewitt’s attorney that they will be following up on their previous demand for a large payment by filing a lawsuit. The lawsuit has been timed to coincide with a carefully planned media blitz in an attempt to create a disingenuous narrative that is at odds with the facts.

It’s clear that our investigation should have continued uninterrupted until all the facts were known. We have terminated several employees based on what we’ve learned and have suspended Dewitt with pay so that we can finish investigating the circumstances of the instant messages that were just provided to us about his threats of violence against coworkers. We will continue to take action as necessary, including parting ways with anyone whose behavior prevents Tesla from being a great place to work. However, it’s also clear that Dewitt’s version of events is not supported by the facts. It would never be right to take action based on an accusation alone — there must be objective evidence or credible witnesses to ensure that an innocent person is not treated unfairly.

It is night and day to work at a company with strong purpose and great team spirit, where people look forward to coming to work. Monday either feels like jail or joy, and the people you work with make all the difference in the world.