Tesla Model 3 pricing and options have not leaked, here’s what happened

We have been getting a lot of messages in the past few days asking us to report on the “leaked Tesla Model 3 pricing and options”. We weren’t going to because we thought it was clear that it wasn’t real, but it has since spread across social media and forums rather quickly so we are stopping the rumor right now: pricing and options for the Model 3 have not leaked… yet.

As far as we can tell, it started from a French Tesla fan site called ‘Tesla-Mag’ that published a chart of Model 3 pricing with different options and battery packs (see below).

Without disclosing the source of the chart other than claiming that it was “their information”, the publication falsely insinuated that it could be a “controlled leak” by Tesla, which is likely what sparked the enthusiasm over the chart.

The chart in question, which has now been reprinted around social media and Tesla forums, is nothing more than an attempt to speculate on the possible options and pricing of the Model 3 by a Tesla Motors Club forum member over two months ago: 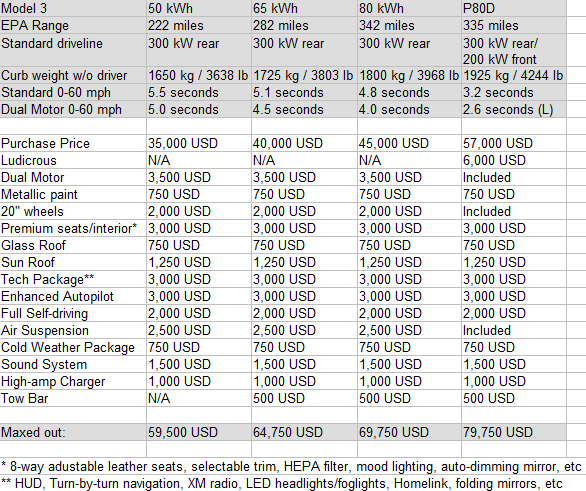 The author of the chart made it clear that it was purely based on speculation from his own assumptions and what others discussed in the same thread. Therefore, it’s not clear how it changed from that to Tesla-Mag’s post claiming that it was “their information” and a possible “leak”.

Update: Tesla-Mag has since updated its article to confirm that they know the source of the chart is a TMC user, but they are still not making clear that it’s only speculation and instead they highlight that the author says that it’s “close to reality”. They are clearly purposely trying to be vague in order to create some hype. They go as far as writing that “the chart will surely be reprinted by other media, but you saw it here first”.

Of course, it doesn’t mean that some of the information can’t coincidently turn out to be true. Some of it is actually based on some of our previous exclusive reports on the Model 3, like that inverter architecture of the Model 3 allowing for 300kW+ power capacity.

But I would take everything else with a grain of salt.

The best information we have so far about the possible battery packs available for the Model 3 comes from an exec confirming that the base model will have battery pack smaller than 60 kWh and from our report last month that Tesla was testing a Model 3 mule with a 70 kWh battery pack and dual motors (Model 3 70D).

We are not likely to know anything concrete until the “final reveal” of the Model 3, which is now planned for close to the start of production in July 2017.