Consumer Reports released its annual auto brand report and it is the first year of eligibility for Tesla since the company had two vehicles tested in 2016: Model S and Model X.

Tesla grabbed the top spot for American brands and 8th total, while foreign brands took over the top 10 with Audi grabbing the global top spot.

The product review magazine explains how it ranks automakers in its annual brand analysis:

“The Overall Score is the combination of our road tests, predicted reliability, owner satisfaction, and safety. For each brand we indicate the percentage of tested models that earned a recommended designation. This percentage reveals a meaningful differentiation.”

Under the scoring system, two of Volkswagen brands, Audi and Porsche, ranked first and second. BMW, another German premium automaker, grabbed the third spot and we have to go to the 8th position to find the first American carmaker, Tesla, and one of only two since Buick ended up at the 10th place.

Here is the ranking with the overall scores and top road test scores (via CNBC): 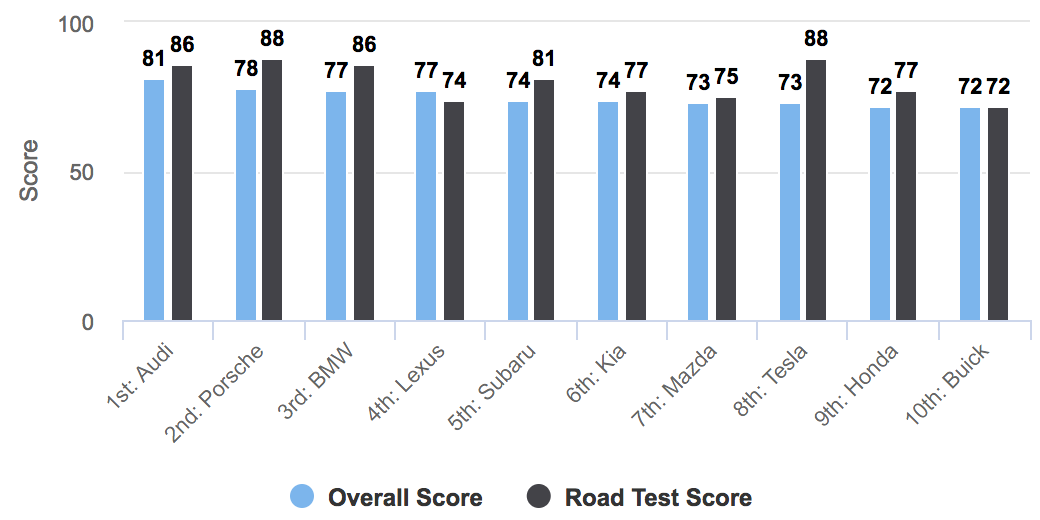 There has been an interesting dynamic between Tesla and Consumer Reports over the last 2 years.

The product review magazine said that the Model S was the best car it had ever tested and it announced last year that its rating system had to be modified because the P85D was so good that it scored 103 out of 100.

But the magazine later stopped recommending the Model S because it scored below average on its reliability survey. Tesla CEO Elon Musk quickly took to Twitter to defend the company and said that most issues have been addressed and highlighted that by Consumer Reports’ own survey, 97% of Model S owners say they would definitely buy the Model S again.

Sure enough, the Model S re-earned Consumer Reports’ recommendation on improved reliability in October, but Tesla and the magazine are still at odds on other issues. Mainly around the fact that Consumer Reports has been calling for Tesla to disable the Autopilot and change the name of the system – something Tesla refuses to do.

They certainly managed to generate a lot of headlines.