Tesla (TSLA): Individual investors are betting on Model 3 ahead of earnings while Wall Street pulls back like never before

As the stock keeps testing new highs in the past few weeks, there’s a clear divide between how retail investors and Wall Street are valuing the company at the moment.

Bloomberg’s Tom Randall penned an article this morning highlighting how Wall Street analysts covering Tesla have never been so bearish on the company as its market cap gained $18 billion in value over the past few months.

“The median target of 14 analysts surveyed by Bloomberg was as much as $48 below Tesla’s stock price last week. That’s the most pessimistic view from Wall Street since Tesla became a publicly traded company seven years ago.”

Here’s the chart in question: 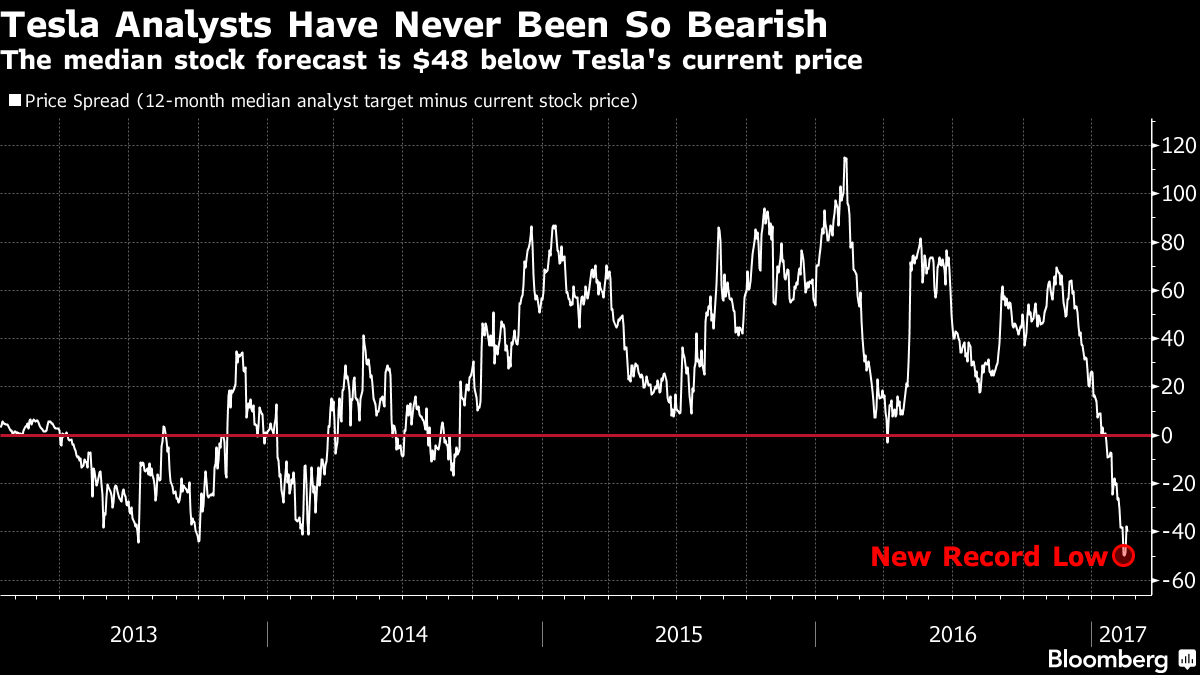 While there’s no doubt that Wall Street is pulling back on Tesla’s stock ahead of earnings, retail investors paint a different picture.

Robinhood, a popular stockbroker app, sent us some data sourced from its retail investors showing that individual investors are more optimistic ahead of earnings than Wall Street analysts:

“Over the past week, retail investors are buying TSLA stock 1.6x more than they are selling – compared to 1.2x more buys to sells the week before their Q3 ’16 earnings, a 25% increase in buying activity, suggesting optimism among Main Street.”

An obvious explanation for the divide would be that Wall Street is more focused on quarterly results, which are expected to be slightly down quarter-to-quarter after the delivery miss as we reported yesterday, while retail investors often have a more long-term vision – especially on a story stock like Tesla.

As soon as the results are released tomorrow after the market close, the focus will likely shift to guidance for the year as investors want to hear about the status of Model 3’s production program.

Since the vehicle is expected to represent the bulk of the company’s revenue for the foreseeable future, its ramp up to volume production is everything for shareholders right now.