After obtaining a 5-star safety rating from the National Highway Traffic Safety Administration and a 5-star rating from Euro NCAP, the Tesla Model S had its first safety rating setback today in the 4 years since its introduction.

The Insurance Institute for Highway Safety (IIHS) finally crash-tested the vehicle and it failed to achieve its top safety rating due to a problem with the seatbelt for the small overlap front crash test.

For some reason, the IIHS decided to test electric vehicles together this year and compare their safety ratings based on their own crash tests.

After releasing the results of the Chevy Volt and the Toyota Prius which both received their top safety rating last month, the agency released the results for the BMW i3 and the Tesla Model S today. 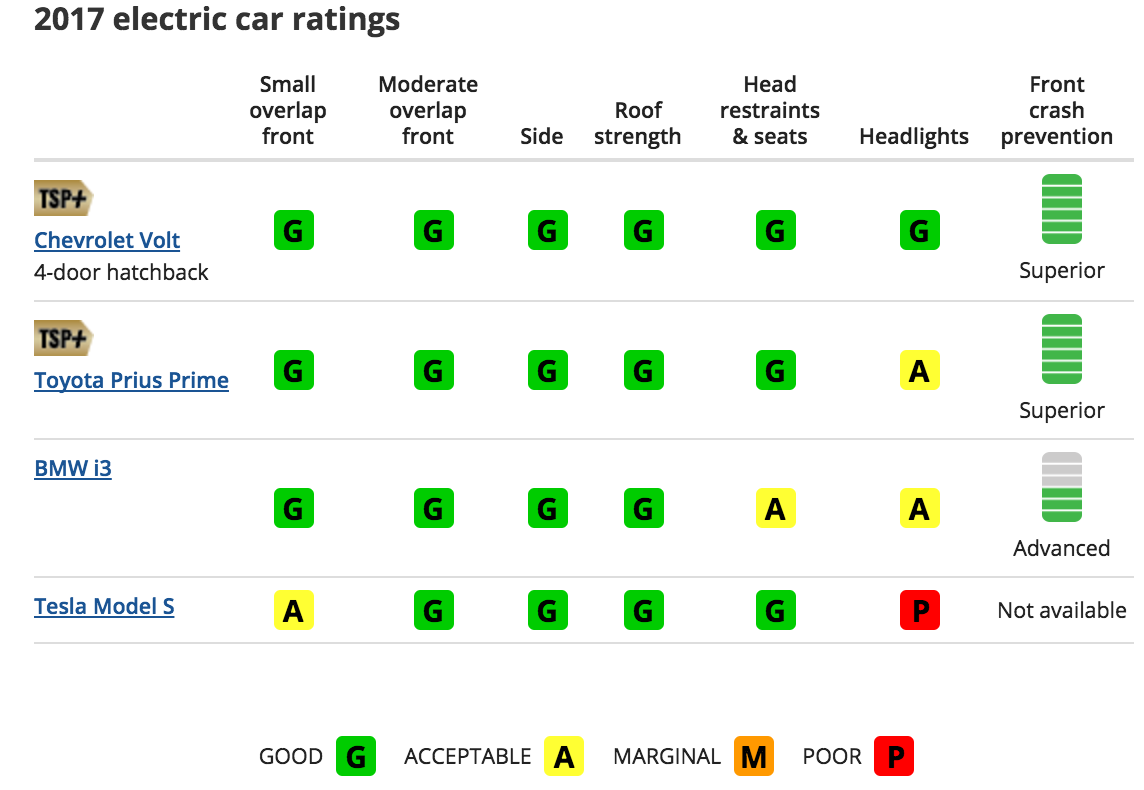 IIHS says that a problem with the seatbelt prevented the Model S from achieving a “good” rating on the “small overlap front” crash test:

The Model S, a large luxury sedan, earns good ratings in all IIHS crashworthiness evaluations except the challenging small overlap front crash test, in which it earns an acceptable rating. Despite lengthening the side curtain airbags to improve small overlap protection in the Model S, Tesla ran into problems in the test when the safety belt allowed the dummy’s torso to move too far forward. That allowed the dummy’s head to hit the steering wheel hard through the airbag. Measurements from the dummy indicated that injuries to the head, along with the lower right leg, would be possible in a real-world crash of the same severity.

Tesla says that it implemented a production change to fix the seatbelt last week and that it now expects the vehicle to achieve the top rating. IIHS confirmed that it will test the updated vehicle as soon as possible and update the rating.

The agency describes the headlights as “poor” without any explanation, but apparently, Tesla acknowledges that they can be improved since it says that they are working with their supplier:

The 2017 Model S isn’t available with anything other than poor-rated headlights. Tesla says it is working with its supplier to improve the headlights, and IIHS will evaluate the new ones when they are available.

They think the new 100 kWh battery pack increases the weight of the vehicle too much to result in anything more than an “adequate” rating:

One version of the Model S, the P100D, also falls short on roof strength, which is important for protecting people in a rollover crash. The rating is based on a strength-to-weight ratio. The P100D has the same roof structure as other Model S versions but is heavier, due to a larger battery, so it earns an acceptable rating.

It’s particularly surprising considering the Model S originally broke NHTSA’s roof strength testing machine when it was tested back in 2013.

“We are committed to making the world’s safest cars, and Model S has previously received a 5-star safety rating from the National Highway Traffic Safety Administration and a 5-star rating from Euro NCAP. Model S still has the lowest ever probability of injury of any car ever tested by NHTSA.

We proactively develop updates and aggressively implement changes onto the production line in record time any time there is a substantial benefit to customer safety. One of the improvements recently introduced in January 2017 specifically addresses the “Acceptable” (or second highest) rating that the Model S achieved in the small overlap frontal crash test, and we expect new tests to yield the highest possible rating (“Good” rating) in the crashworthiness category.

Additionally, IIHS tested a vehicle that was in transition with new Autopilot hardware, but without the new software that enables Automatic Emergency Braking. In the coming weeks, Automatic Emergency Braking will be deployed via a free over-the-air software update, and IIHS will be testing a new vehicle. We expect to receive the highest possible rating in every category, making Model S eligible for the IIHS Top Safety Pick award.”

Here are additional videos from IIHS: