Due to its cyclical nature, the global sea ice concentration has been the source of some conflicted reports over climate change – sometimes even used as a talking point by climate change deniers when the ice was gaining before winter. It’s, of course, stupid since most scientists agree that the concentration of global ice is declining.

But unfortunately, it has never declined at a more impressive (and terrifying) rate than in the last 3 months.

A few graphics of the sea ice concentration in the Arctic and Antarctic based on data from the National Snow and Ice Data Center (NSDIC) have been spreading in the past few days and I think they are worth sharing here.

It’s certainly not fun to look at, it’s quite scary when you think about it really, but if it can motivate more people to take action and help find solutions, it’s worth it.

The year 2016 is on track to be the hottest ever recorded, but so far the impact on the ice concentration in the Arctic sea wasn’t where it was the most visible – and by that I mean that the extent of the sea ice had been worst in previous years, like in 2007 and 2012.

Here’s the graph of Arctic sea ice concentration for the past record lows versus 2016: 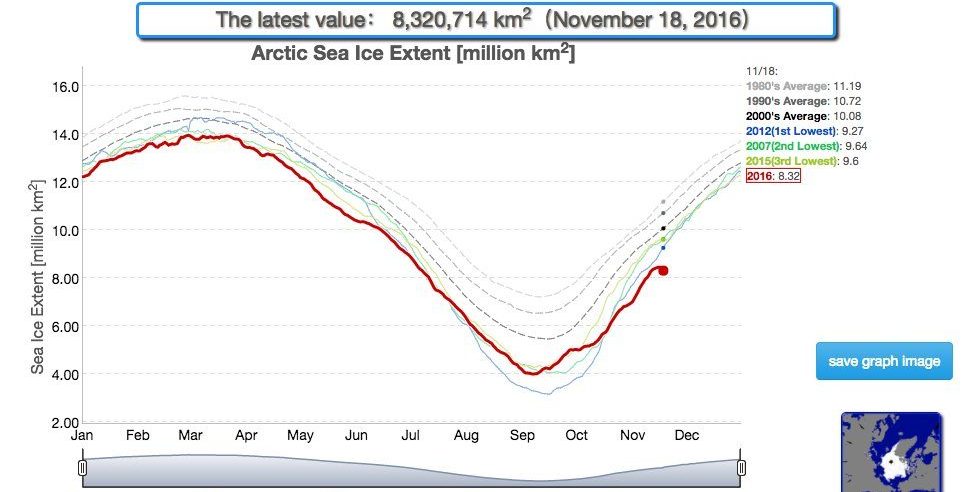 The same data becomes even scarier with the global sea ice concentration (combining Arctic and Antarctic): 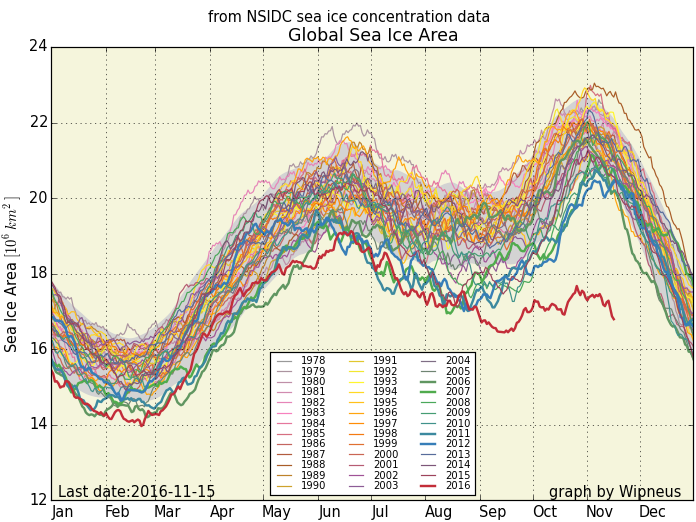 With the earth consistently hitting temperature records, the poles have difficulties cooling down around October and November – and the data has never been clearer about this than this year.

Zack Labe, PhD student of the Department of Earth System Science (ESS) at the University of California, Irvine, has been sharing some great visualization of the data from NSDIC:

Please consider sharing these charts with your friends. It’s an important issue since the impacts of dwindling sea ice can accelerate global warming and complicate any effort of an eventual recovery.