Tesla Model 3: rare sightings of prototypes that you might have missed

I have seen a lot of Tesla Model 3 prototype sightings. So many that I thought I had seen them all, but apparently not. And if I have missed a few, maybe you have too.

Oliver Cameron, a lead engineer on Udacity’s self-driving car team (and a Model 3 reservation holder), put together a gallery of Model 3 pictures yesterday on Medium.

We have already shared most of the pictures in the gallery in previous articles, but there were also a few new ones to me and therefore, maybe to you too.

Like a sighting of the black matte Model 3 prototype spotted with the silver prototype at what appears to be a Tesla service center – or at least somewhere with access to mobile Superchargers. Here it is: 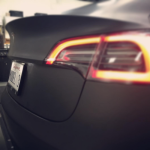 From the first picture, the two prototype side by side barely look like they are the same vehicle. It’s probably just the paint job that makes the difference, but the front ends and hoods look completely different.

I’d like to give credit where it is due for the pictures, but it’s actually hard to trace them back (maybe it’s on purpose). Cameron gives credit to Tesla Motors Club without a direct link, but it looks like the pictures originated from Instagram though I can’t find the original source.

It looks like it could be from the same occasion when we got pictures of the trunk of the black matte prototype and its interior for the first time:

But apparently, the silver Model 3 prototype was also around. We got our best look at the silver prototype so far just a few weeks ago at Tesla’s party in San Jose. You can see a full gallery of pictures here.

Those two cars remain to this day the only two working prototypes of the Tesla Model 3 spotted so far. That’s despite the fact that we know Tesla has been ordering enough parts from suppliers to build up to 300 prototypes. Of course, some of the parts will be used for process validation outside of prototypes and for other processes, but it’s still interesting that no other working prototypes have emerged.

Some speculated that Tesla could be testing Model 3 powertrains on Model S bodies, which could explain why they are not being spotted. It could be a possibility, but so far it’s only speculation.

Tesla says that it is on target for “volume production and deliveries of Model 3 in the second half of 2017″. The company recently disclosed that production line layout is completed in Fremont and it is now testing subsystems for the vehicle program.