Tesla’s lawsuit against an oil executive trying to impersonate CEO Elon Musk to get material information about the company and now a subsequent countersuit are starting to uncover what appears to be a plot by the oil industry against Tesla.

As we reported yesterday, the oil executive that Tesla claims is behind the impersonation attempt, Todd Katz, is not denying the attempt, but he is still asking the court to dismiss the suit against him on the basis that the impersonation was not “credible” enough to merit the lawsuit.

Katz, who lost his job at oil industry service firm Quest Integrity after Tesla filed its lawsuit, has now filed of a countersuit against Tesla asking for $1 million for lost earnings.

In the countersuit, Katz admits being behind a Twitter account – @valuationmattrs – that he claims Tesla hacked in order to know his identity and link him to the impersonation attempt:

“Tesla dispatched an employee or agent from its factory to a nearby Best Buy store, in order to use a Best Buy floor sample iPhone to access Kat’s Twitter account, from an IP address that did not correspond to Tesla. In this way, Tesla sought to conceal its illegal and criminal activities, specifically its violations of California Penal Code § 502(c).”

In response to the claim that Tesla hacked the Twitter account, a Tesla spokesperson issued the following statement:

“The oil executive Todd Katz is perfectly capable of embarrassing himself with no help from Tesla. We did not even know that the Twitter pseudonym in question belonged to Mr Katz. What we are most interested in discovering is what people or organizations collaborated with Mr Katz in his attempt to gain information illegally from Tesla and who or what companies may have paid him to do so. That is of great concern to us and many members of the public.”

In its lawsuit, Tesla is listing 10 John Does who the company alleges conspired in the effort the obtain or use the information Katz was trying to get through his impersonation of Elon Musk in an email to Tesla CFO Jason Wheeler.

The company Katz was working for at the time, Quest Integrity, is linked to a long list of oil companies like BP, Chevron and ExxonMobil, and others. The oil service company is calling “absurd” any claim that there’s a conspiracy by itself or its clients against Tesla. In his countersuit, Katz claims that he also doesn’t know about the 10 John Does Tesla is linking to the effort to obtain material information.

Katz claims that he was using the Twitter account, which had screen names like ‘Elon Madoff’ or ‘Enron Musk’, to “strongly criticize” Tesla and CEO Elon Musk over the company’s financials and information disclosure.

But Katz has now deleted almost all of those critiques from his account because what the lawsuit (embedded below) is not mentioning is that he was also using it to anonymously harass and insult anyone who dared say anything positive about Tesla or Elon Musk – myself included.

I had to “block” @valuationmattrs from my own Twitter account (@FredericLambert) after ‘Elon Madoff’, now confirmed to be oil executive Todd Katz, kept sending me vulgar comments and insults. We are talking anything ranging from calling me an “idiot” to making vulgar and homophobic remarks.

Katz also removed other suspicious Tweets like this one (obtained by Electrek via a reader) in which he claimed that “someone” filed a complaint against Elon Musk with the SEC: 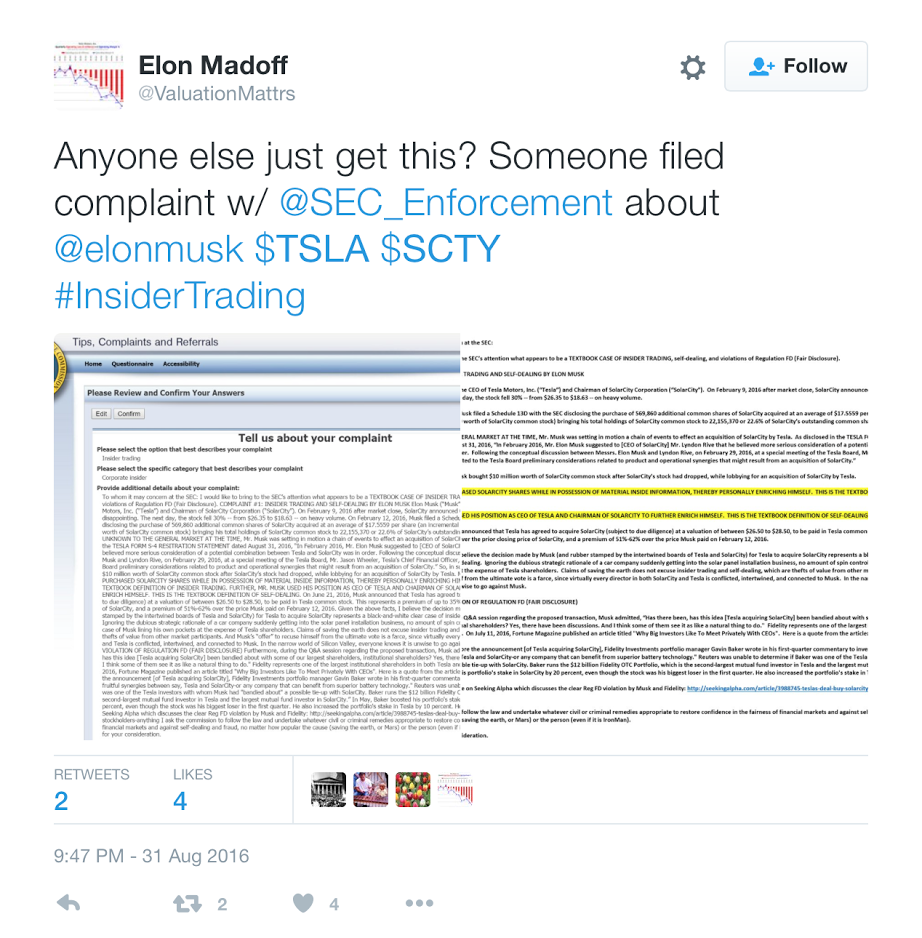 In the screenshots that he attached with the claim that “someone” filed a complaint, you can clearly see the complaint submission form which is the only way to find a SEC complaint unless disclosed by the SEC – meaning that “someone” is actually ‘Elon Madoff’ aka Todd Katz himself or someone directly linked to him.

It’s still unknown who the 10 John Does Tesla claims have been involved with Katz’s attempt to obtain material information about the company through his impersonation attempt and it might be more difficult to find out now that he deleted almost all trace of his online persona that appears to have created with the sole purpose to attack Tesla and people reporting on Tesla.