Electrek has learned some details of Tesla’s ‘Powerpack 2.0’, the second generation of Tesla Energy’s scalable battery pack for commercial and utility-scale projects, which will be equipped with the new ‘2170’ battery cells. The new cell is potentially Tesla’s most important product to be unveiled this year – and yes, I’m aware Tesla unveiled the Model 3 in March.

Not much is known about Tesla’s new battery cell which was developed in partnership with Panasonic and that will soon go into production at the Gigafactory in Nevada. CEO Elon Musk and CTO JB Straubel both said that the new 2170 format cell will feature a new battery chemistry slightly different from the current 18650 cells used by Tesla in its vehicles and energy storage products.

They also said that it will have a higher energy density and enable a lower cost per kWh, but that’s about all the information we have on the new format. It’s light on details, but we now have a better idea of the improvements it will enable when applied to Tesla’s products, which is really the most important thing considering they don’t plan to sell the cells separately – at least for now.

The new 2170 cell will first be used in Tesla’s Powerpack and Powerwall program.

Now sources with knowledge of the Powerpack 2.0 program told Electrek that Tesla is preparing to launch a new generation of the battery pack, which has been referred to as ‘Powerpack 2.0’, toward the very end of the year. The new pack will make full use of the new 2170 cell format and sources say that it will double the energy capacity of the system.

While the current Powerpack is being advertised with a capacity of 100 kWh, sources say that the available energy is closer to 95 kWh and that the new Powerpack 2.0 will have a capacity of 200 kWh.

The pack itself will stay roughly the same size, which is a good indication of the improved energy density. Again, details about the cell are scarce and we caution against jumping to the conclusion that we are talking about a 100-percent increase in energy density since some of the improvements also happen at the pack level. While the density improvement will certainly be a benefit for the Model 3 and Tesla’s other vehicles, a doubling of density is unlikely. Also keep in mind that Powerpack and Powerwall use lower density 18650s to begin with. 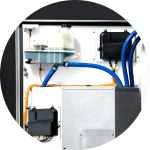 The pictures above show the insides of the Powerpack 1.0. Tesla stacks in series of the same battery modules found in the Powerwall, the company’s home battery pack. We don’t have details of the Powerwall 2.0, but some of the improvements will certainly overlap and we would expect Tesla to deliver a significantly improved product.

Another interesting improvement coming with the Powerpack 2.0 is that Tesla is dropping the Dynapower inverter and introducing its own inverter, which has so far been referred to as ‘Tesla Inverter’. That’s something Tesla has been talking about for a while. When discussing power electronics in August, Elon Musk said of Tesla: ‘we are probably the best in the world on advanced inverter technologies’.

Last month, we reported on Tesla significantly reducing the price of its commercial inverter by 19%, as well as the price of the Powerpack by 5%. The move could have been in anticipation of the new generation with the new inverter, but it’s not clear at this point. Powerpacks are sold for commercial and utility-scale projects and the size of those can vary greatly and affect the price based on the energy capacity and power output.

The new capacity of the Powerpack 2.0 is 200 kWh, but that’s only the base unit. It only means that a 1 MWh project would take 5 Powerpacks. For example, Tesla’s recently announced 80 MWh Powerpack system at the Southern California Edison Mira Loma substation would use 400 Powerpack 2.0.

When Tesla announced the project, the company didn’t respond to our inquiries about the system using the new 2170 battery cells. It is expected to come online by the end of the year.

Tesla will unveil its new energy products, including the new ‘solar roof’, at an event on October 28. That’s when we expect to learn a lot more about Tesla’s second generation of stationary energy storage products powered by the new Tesla/Panasonic battery cell.