Car and Driver predicts Tesla Model 3 will be 2 years late, here’s why they are wrong

There’s no doubt that Tesla has suffered several delays on its product launches (heck, even its events rarely start on time). From the Roadster to the Model X, and now even Tesla Energy products are being slightly pushed back a few months. But what about its most important product to date and arguably the most time sensitive: the Tesla Model 3?

Tesla says it will arrive in late 2017, but in its latest issue, the popular automotive magazine Car and Driver claims the Model 3 will not arrive until late 2019, 2 years late, and it backs its prediction with a set of formulas.

The publication’s formula appears to be a little tongue in cheek, but nonetheless, they are “putting their money” on the vehicle being delivered in “September or October of 2019”.

Car and Driver explain the logic behind their projection:

Projecting exactly when the Model 3 will go on sale (Actual Launch Date, or ALD) takes sophisticated mathematical analysis that incorporates several important factors, including the inevitable Plat Construction Problems (PCP), whether or not Musk Insults or Sues any Suppliers (MISS), and the Massive Determination Factor (MDF) displayed by Musk in achieving his goals. So starting with an Initial Promised Date (IPD) of “Late 2017”, the elegant equation looks like this:

They released this equation: 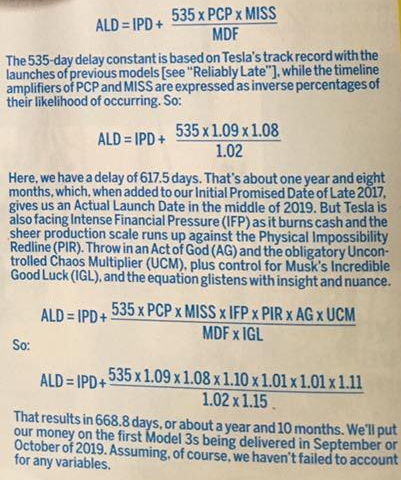 My take: while I get where this is coming from based on Tesla’s history of delays, I think it is useless to try to predict how far in the future delays will push the launch. Tesla CEO Elon Musk himself made it clear that he expects delays based on the complexity of the supply chain.

Tesla’s deadline for the Model 3 is July 1st, 2017. Musk said that while internal teams and suppliers will be held accountable for meeting this deadline, he doesn’t expect that they will achieve it, which is why Tesla advertises deliveries in “late 2017”.

Car and Driver, and many others, might expect that it will be pushed further, but that’s simply based on the fact that Tesla had delays before, and therefore, it should have delays again.

At the end of the day, those with the most information about the Model 3 program are best suited to predict its launch. At this point, I think that this is still Tesla and not Car and Driver, or anyone else for that matter.

Car and Driver is basing its calculations on the assumption that the Model 3 can be delayed for the same reasons as Tesla’s other vehicles, which is not exactly right. For example, their reference to Tesla suing a supplier for the Model X’s Falcon Wing doors. While this likely affected the Model X launch, it’s far from the main reason the Model X took so much time to make it to market.

The vehicle was pushed by over 2 years and Tesla made it clear that the main reason is that they had to focus on the Model S and its production ramp up. The Model 3 doesn’t have the same problem.

As Musk discussed in the second quarter conference call last week, he is happy about where Tesla is right now in term of production. The company is manufacturing ~2,000 vehicles per week and hopes to increase to ~2,400 by the end of the year. While Tesla was developing the Model X for production, it was increasing its production from ~400 vehicles per week to ~1,600.

I also think that demand was a factor in bringing the Model X to production. Tesla realized that the demand for the Model S was way higher than they originally expected. Early in the program, Tesla predicted a market for ~20,000 sales per year, but the company beat that in its first full year of production.

It made easier the decision to focus on the Model S. While Tesla now needs the Model X to grow, it didn’t for the past 2 years. It could still grow just with the Model S. Again, the same thing doesn’t apply to the Model 3.

The automaker could hit its peak production rate for the Model S and Model X within the next 6 months, which makes the Model 3 essential to Tesla’s grow in the short-term.

In conclusion. While some healthy skepticism on Tesla hitting the “late 2017” target is good, I think assuming that anyone would have a better idea than Tesla on when the Model 3 will hit the market is foolish.