Tesla Gigafactory: a look at the robots and ‘machine building the machine’ at the battery factory

Now that Tesla opened up its Gigafactory to the media and Tesla owners last week, we got to see quite a few cool things at what is on its way to become the most advanced factory ever built, but arguably none cooler than the robots working there.

There are a few different kinds of robots helping employees at the plant. Some workers say that they see them as colleagues, something Tesla already tried to implement at its Fremont Factory by giving X-men names to the robots.

Let’s take a quick look at the Gigafactory robots…

While Telsa plans to employ as many as 10,000 people at the factory once at full capacity, the company is also betting on automation to help achieve its goals.

The company hired Eric Christensen to manage industrial engineering at the plant. Christensen has over 20 years of experience in manufacturing automation, primarily at chip maker AMD, and interestingly, CEO Elon Musk often compared the Gigafactory itself to a CPU.

Christensen oversees the overall equipment layout and material flow, something robots participate in.

Robots like these self-navigating Autonomous Indoor Vehicles (AIVs) by Adept:

Unlike most other kinds of the robots at the plant, those AIVs don’t need to be caged or follow floor magnets or navigational beacons, they can navigate the factory freely through the use of a digital map and safely avoid people and obstacles by detecting them with their sensors.

They are primarily used for moving materials between workstations.

They are also customizable. For the visits last week, they were welcoming people to the factory saying “welcome to Tesla”. The automaker also uses them at its Fremont Factory. They modified one to make it look like R2-D2 from Star Wars: 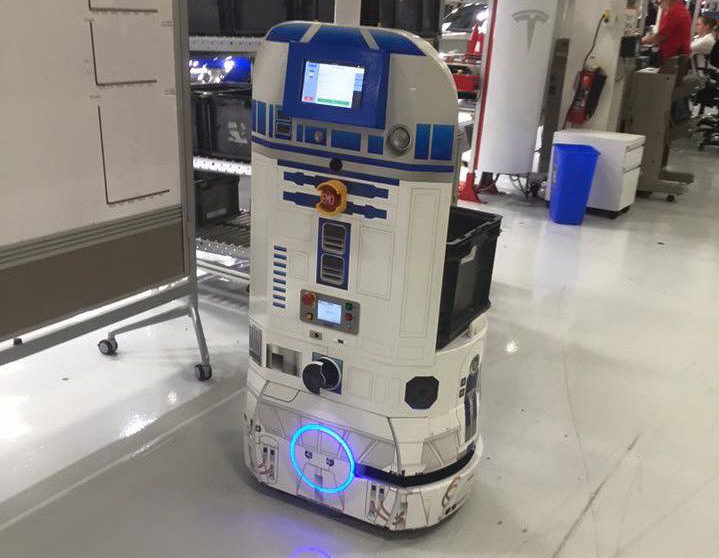 This particular model is called an Adept Lynx. It can handle workdays of up to 19 hours by managing power and scheduling its self-charging operations. It can handle payloads up to 60 kg.

Here’s a quick video demonstration of the Adept Lynx moving a rack of battery cells at the Gigafactory:

A lot of the robots at the plant are what’s commonly known as ‘automated guided vehicles’ (AGVs). Those machines use floor magnets or navigational beacons to navigate the production foor.

They can be seen moving battery modules and Powerwalls at the Gigafactory:

They also have much more heavy duty versions of these vehicles at the plant. Here’s one moving around while playing the theme song music to Indiana Jones:

The last kind of robot is the heavy duty robotic arm – something Tesla already make extensive use of at the Fremont plant.

While Tesla appears to primarily use Kuka for those kinds of robots at Fremont, the Gigafactory seems to be equipped with Fanuc machines. Here’s a M-900iB at work. The series can handle a payload up to 700 Kg, but this one in particular can work with up to 360 kg:

Other similar robots are assembling the battery trays: