The Tesla Model X might not be the first vehicle to come to your mind when thinking about a limousine, but it makes perfect sense for a fleet operator in California who just updated his fleet with two Model X’s. Neil Spenta, CEO of American Corporate Sedan and Limousine (ACLS), did an interview with LCT Magazine, a fleet operator publication, to explain his logic behind going electric for his limousine service.

Spenta moved to the US from Australia in 2014 to buy and operate a limousine company – and eventually convert its fleet to electric vehicles.

When he bought American Corporate Sedan and Limousine, which is based in San Diego, the company was operating a couple of Town Cars and a Ford van. He started updating the fleet last year by buying two Tesla Model S sedans, and then a 2016 Cadillac Escalade.

He has since retired the Model S’s, though he kept one in case of emergency, and replaced them with brand new Tesla Model X’s. 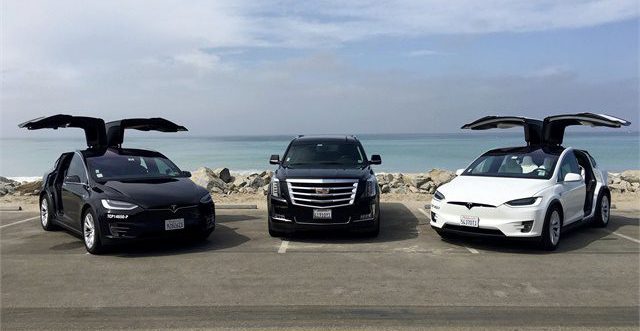 Spenta praises the automaker’s warranty in explaining to LCT why he chose Tesla:

Making an entrance/exit out of a Falcon Wing door probably also helps sales.

He then goes on to explain that he was paying $7,000-8,000 a month in gas and maintenance bills. Those bills went down after going with Tesla:

“Even though the Escalade was cheaper than our Model X SUVs, the money we are going to spend on gas and maintenance over the next five to eight years in itself is more expensive than the car payment for the Tesla,” he says. “You are probably looking around a similar price range to buy a fully loaded BMW 7 Series or Mercedes S Class anyway.”

Spenta says that his drivers use Tesla’s Supercharger network to charge the vehicle. While Tesla advertises Supercharger access as ‘free’ for the Model S and X (it’s accounted for in the purchase cost of course), the practice of frequently charging is actually frowned upon since they only talk about ‘free charging for long-distance travel’.

The network was intended to enable road trips. Drivers regularly using the same Superchargers without traveling for long distances have been warned by Tesla in the past.

Nonetheless, it seems to work for Spenta’s drivers. They take their break or lunch while their Model X is charging.