Elon Musk revealed his “Master Plan Part 2” for Tesla last week and one of the biggest product to be officially announced, though Tesla officials already had expressed interest in releasing such a vehicle, was a ‘Tesla Pickup Truck’. We don’t have a timeline for the release or the unveiling of the vehicle, but Musk called it “a new kind of pickup”, which of course piqued our curiosity.

For better or worse (probably better), Tesla is not the kind of automaker to release concepts that are not already scheduled for production and therefore, it’s difficult to envision what their new products will look like…

It doesn’t stop fans to produce renderings based on the little information Tesla releases or the occasional leaks. For the Model 3, we did a few roundups of fan renderings and some actually came pretty close.

We have already seen some fan renderings for the pickup truck, but they are not based on much information.

What we will be looking at today in order to get some inspiration to imagine Tesla’s pickup is an actual concept developed by a recent graduate of the Art Center College of Design, where several if not most of Tesla’s designers studied, while he was doing a design internship at Tesla’s Design Studio in Hawthorne last year.

The concept was Jason McGinnity’s Sponsored Thesis Project completed during his Interior/Exterior Design internship with Tesla. McGinnity now works as a Product Designer at Adidas Future Design in Portland, Oregon.

It is called the ‘Tesla Allterrain’ and it is based on a Jeep Wrangler and Toyota FJ Cruiser (images via Jason McGinnity):

In my opinion, the concept is brilliant and the sketches are quite beautiful.

McGinnity listed some ambitious specs with the design. He envisioned ~220 miles of range on a 70 kWh battery pack with dual motors, a top speed of 120 mph and an acceleration from 0 to 60 mph in just 4 seconds.

He also developed an interesting concept for a removable 10 kWh battery pack to act as a range extender:

It would be difficult to implement safely with an open-air and accessible battery design like envisioned by McGinnity here, but arguably not impossible. It would play with Tesla’s previous battery-swap station concept.

Another interesting part of the design is the sliding C-Pillar with a stretched waterproof semi-transparent fabric attached to a telescoping roof rails. 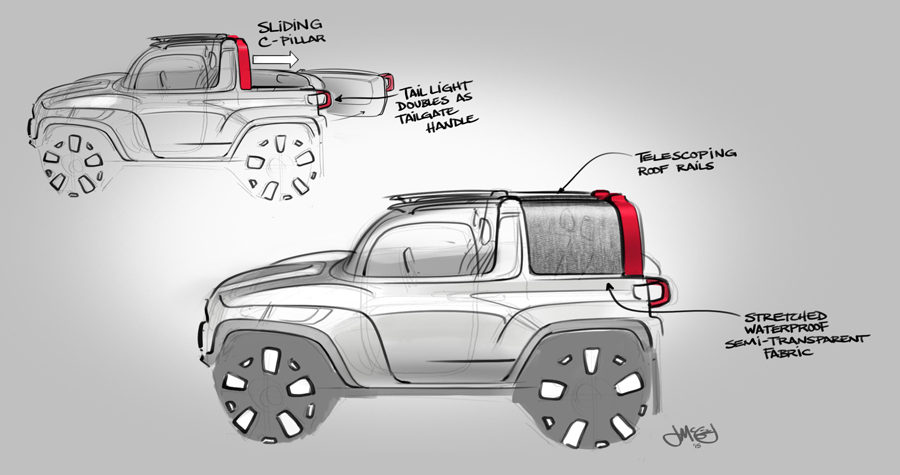 It would be interesting to see a similar concept extended to a larger platform for a full pickup.

What do you think of the design? What features would like to see being carried to the “new kind of pickup” Tesla is working on? Let us know in the comment section below.