Now the Japanese automaker is bringing back the feature in the new 2017 Prius Plug-In, now renamed the ‘Prius Prime’, and it will reportedly be able to charge your battery pack to contribute to the vehicle’s electric range. Looking at the size, I’d guess it is at least 3-5 times bigger/more powerful than the previous Kyocera solar panel but even then, will it have a meaningful impact on driving/range?

The news comes from Auto News Europe since apparently the feature will only be available in the Japan and European versions at launch:

“Sun power only amplifies the eco-car cred of one of the greenest vehicles. The cells charge the car even when it is parked and can boost fuel efficiency by as much as 10 percent by allowing longer electric-only driving times.

The technology will only be offered in the Japan and European versions of the car — at least initially.”

The automaker plans to bring it to America, but the reinforced glass sheeting currently used for the solar panel is not passing the US rollover crash tests. They are reportedly working on a solution, but there’s no timeline for a US debut.

The Prius Prime is set to arrive in the US by the end of the year. 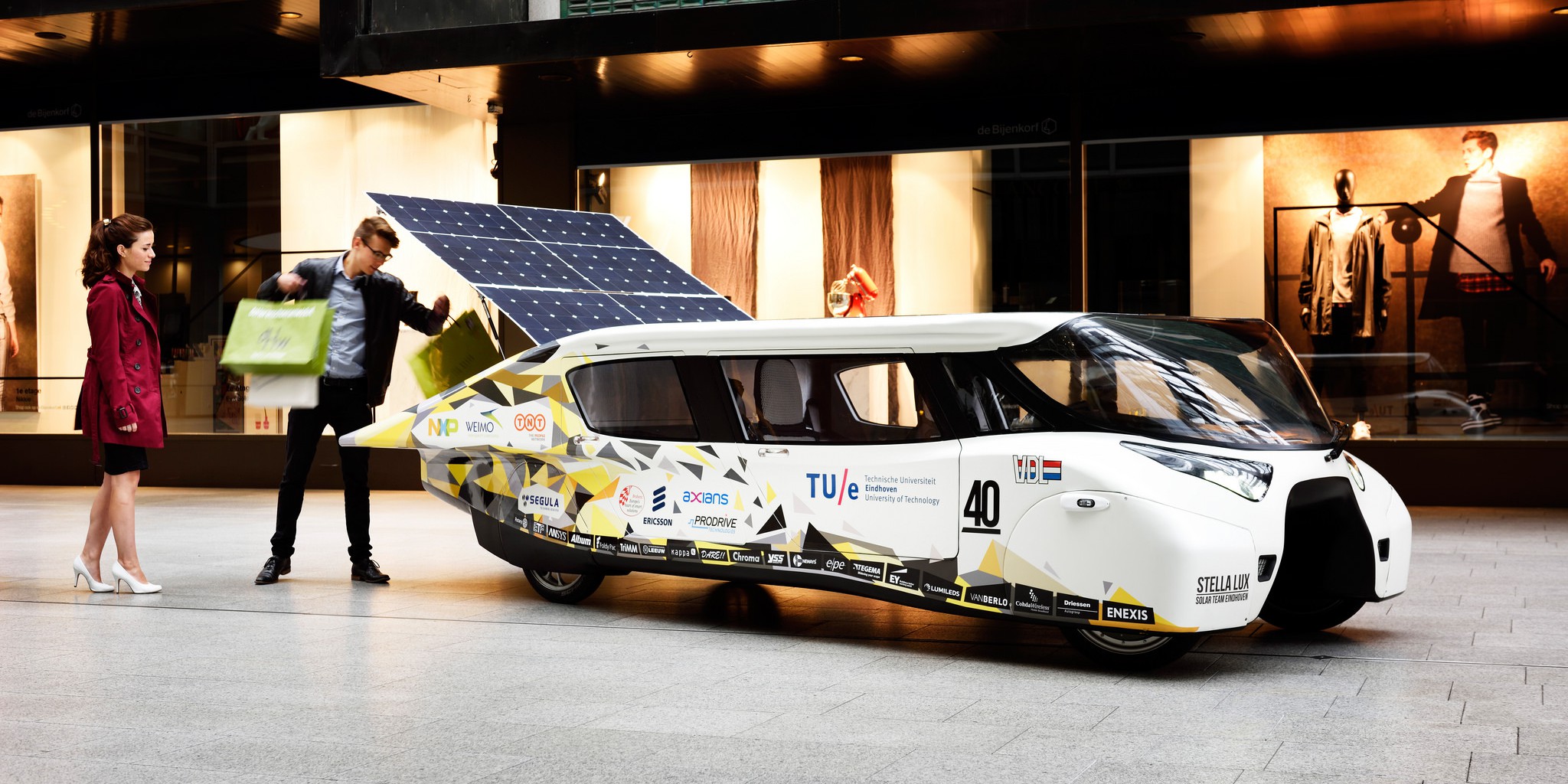 You might have heard about solar cars like the Stella Lux by the Solar Team Eindhoven pictured above and while those vehicles represent impressive engineering feats, they are not really practical in commercial applications.

Theoretically, your Prius Prime could fill itself up with only the sun at the airport parking lot on a 10 day trip.
There are already plenty of electric vehicles powered by solar energy on the roads today, including our publisher Seth’s two EVs, but those cars are powered by solar energy from rooftop installations optimized to produce as much energy as possible, which is difficult to accomplish if installed on a vehicle.

In the case of the Prius Prime, it is equipped with a 8.8 kWh battery pack which enables 22 miles of electric range on a single charge before the gas-powered engine kicks in.

Koji Toyoshima, Toyota’s chief engineer for the Prius plug-in, says that the solar panel will increase  car’s efficiency by up to 10 percent. In good conditions, the panel will likely add about 2.2 miles of electric range to the vehicle throughout the day. Even that seems extremely optimistic as have Toyota’s electric estimates in the past. But, over the lifetime of the car, it might make a small dent in your energy usage and that’s certainly a good thing. Theoretically, your Prius Prime could fill itself up with only the sun at the airport parking lot on a 10 day trip. .

As solar panel efficiency improves in the coming years, we are likely to start seeing more options like this one in the future, if only to counteract the ‘vampire drain’ of electricity by the electronics.  In the meantime, if you can, it’s probably a better choice to put the solar panels on your house.