The North Carolina Department of Transportation (NCDOT) is currently holding a hearing to decide whether or not to allow Tesla to get a second dealership license to operate in the state without having to go through a third-party franchise dealerships.

Tesla currently operates a store and service center in Charlotte and a service center in Raleigh. The automaker is now trying to get a second sales license since having won a legislative battle that successfully stopped a bill from outright banning direct car sales in the state back in 2013.

Though Tesla has not been able to get its license yet as it is now facing opposition from the car dealership association in a DMV hearing.

For the past two days, Tesla and representatives from the dealerships have been battling over the possibility that some restrictions could allow the DMV to refuse to issue the new license to Tesla.

Diarmuid O’Connell, Tesla’s Vice President of Business Development, testified at the hearing opposite to a lawyer representing the dealerships. When Tesla was fighting the bill to outright ban direct sales in 2013, a poll showed that North Carolina was overwhelmingly against the ban (97%). Now some of those Tesla supporters were expected to make public comments at the hearing, but the DMV decided to skip this part.

She highlighted some of the reasons why she prefers Tesla’s model to third-party dealerships:

“I have never been good at haggling over prices (I find it to be a completely miserable experience), so there was a great deal of relief on my part, as a consumer, knowing that when I purchased my Tesla I was paying the exact same price anyone else in the world would pay. I am certain that in my car purchases previous to my Tesla purchase, I did not get a good deal due to my lack of bartering prowess. By purchasing my car directly from Tesla, I didn’t have to worry about getting ripped off.”

She posed for a few pictures before the hearing. 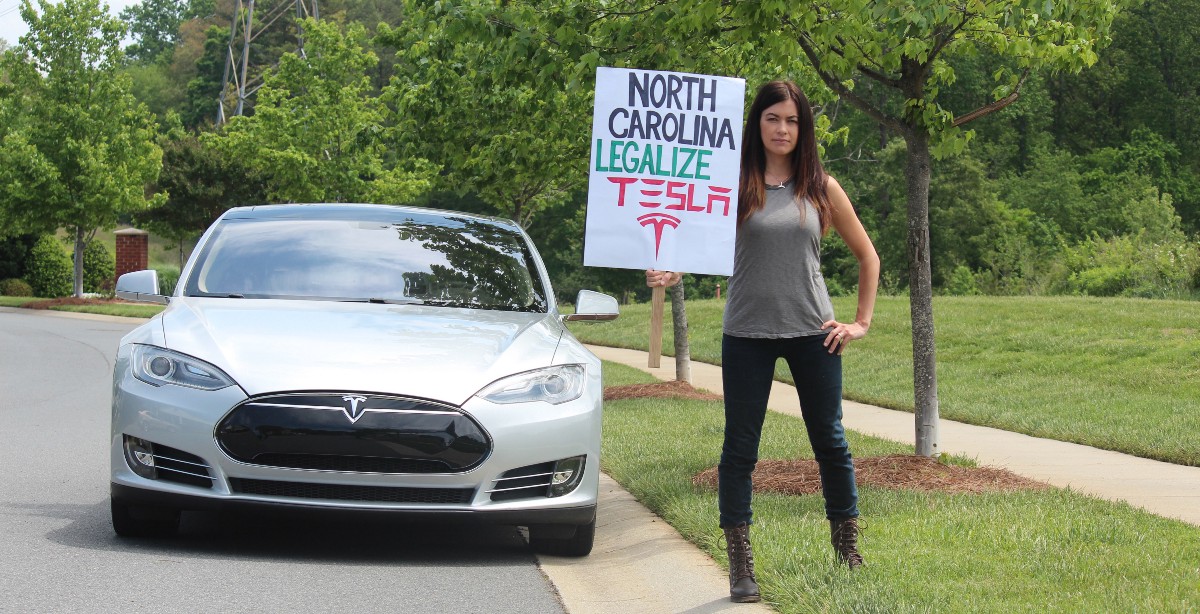 The move to sustainable transportation is an essential step in the evolution of humans to live in a way that does not destroy the world around us. I have driven over 35,000 miles in my Tesla Model S, and all the electricity (with the exception of road trips) has come from sunshine collected by the solar panels on the roof of my home. – Leilani Münter

Münter, who recently collaborated with Louie Psihoyos for the movie Racing Extinction, linked the current situation in NC to NADA’s effort to block Tesla’s sales in several states across the US:

“The National Auto Dealers Association is lobbying to stop Tesla’s direct sales model. These are the guys who have been selling us gasoline-powered cars since — well, since we were born. Their chairman once stated that NADA “has a whole mess of lawyers in Washington” to defend their franchise laws and prevent Tesla from selling cars directly to customers. He added “NADA has serious concerns about Tesla’s intentions.” I can tell you what Tesla’s intentions are: to sell an American-built electric car to those who want them, in the United States and abroad. It’s pretty simple.

NADA has argued that Tesla selling directly from the manufacturer to the customer is “unfair competition.” It is the same sales model used by Apple Computers and Ikea’s furniture, so why should cars be any different?”