Tesla is currently facing strong opposition from the dealership lobby in Connecticut over a new legislation that would allow the automaker to sell directly to consumers in the state. The bill SB3 is currently in consideration and awaiting a vote in the state Senate. It would enable Tesla to open up to 3 stores in the state.

Besides the dealership monopoly, Connecticut has been very friendly to Tesla, offering up the first Supercharging stations on the East coast, hosting a service center in Milford and an upcoming Gallery multi-purpose location in Greenwich.

This week Tesla published the results of a survey showing strong support for its direct sales business model in the state, but the Connecticut Automotive Retailers Association is challenging the relevance of the survey.

Andrew Myers and Matt Johnson from Myers Reserach conducted the survey and commented:

“According to the results of our recent statewide survey of 600 likely 2016 voters, an overwhelming majority of Connecticut voters (76 percent) favor changing state law to allow Tesla Motors to sell their products directly to consumers. Notably, as voters learn the specific details of the arguments from both sides of the debate on this issue, support for changing existing law remains remarkably stable, never falling below 70 percent – even after messaging from both sides.”

Here are the results: 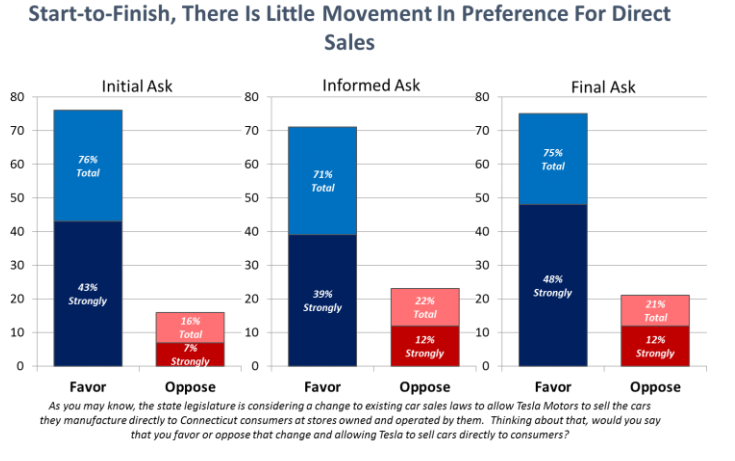 Tesla’s government relations manager, Will Nicholas, commented on the survey:

“The survey sends a crystal clear message to leaders throughout Connecticut: constituents are eager to attract companies like Tesla, with new approaches and cutting edge innovations that bolster Connecticut’s economy with new revenue and the good-paying jobs we need. Voters understand Tesla’s work represents a step in the right direction and the innovation we need for tomorrow.”

The Connecticut Automotive Retailers Association (CARA) was dismissive of the survey and instead cited its own hypothetical survey that would be favorable to its position. CARA President Jim Fleming commented:

“If the auto association surveyed the public to see if they wanted to maintain dealerships and support our local economic activity against a national online company we would also have strong support. We further believe there would be a lot more people that would affirm a stronger concern for keeping dealership locally owned and operated by generationally owned families than the limited concerns of a few people wanting a Tesla around.”

Although Tesla indeed ordered the survey themselves, at least they have data to work with. On the other hand, CARA is fighting back by citing the hypothetical results of a non-existent survey.

This week Tesla is asking for support in helping pass the bill, but the automaker is moving forward with a “gallery” in the state either way. The gallery will be located in Greenwich on Greenwich Avenue and will exist for “educational purposes” rather than as a retail location.

Featured Image: Interior of the Cleveland store as line filters in during Model 3 reservation day, Mach 31, 2016 – by Jon Jivan