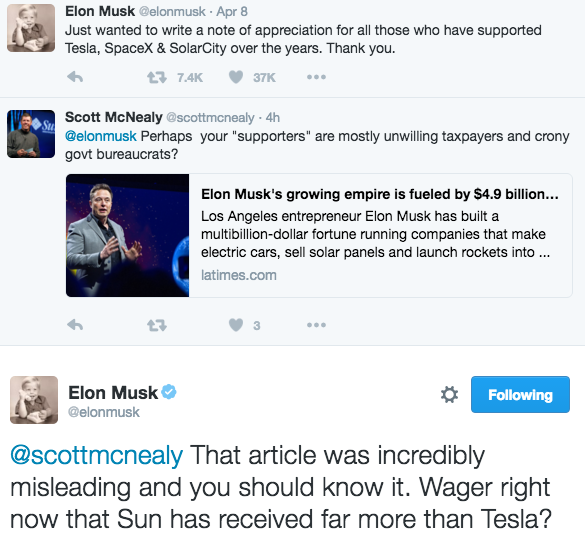 For some reason, today McNealy decided to reply to a tweet Musk sent out two weeks ago. The Silicon Valley executive claimed that Musk’s supporters were unwilling taxpayers and he referenced a LA Times article from last year that mistakenly implied that Musk’s companies, especially Tesla and SolarCity, received $4.9 billion in subsidies.

The article in question is titled “Elon Musk’s growing empire is fueled by government subsidies”. The publication compiled data from government programs and estimated that Tesla Motors, SolarCity and SpaceX, three companies Musk is involved in, have benefited from “$4.9 billion in government support”.

When the article was published last year, we agreed with Musk’s claim that it was misleading and we even published a complete breakdown with comments on each government incentive and information that wasn’t included or simply glanced over by the LA Times.

McNealy, a fervent libertarian, seems to disagree about the relevancy of the article, which was published almost a year ago. The executive co-founded Sun Microsystems in 1982 along with Vinod Khosla and others. Khosla was SUN’s first CEO, but was ousted and replaced by McNealy, who then held the position for over 20 years. Interestingly, after leaving the company, Khosla became a billionaire venture capitalist and specialized in investing in clean technologies.

Now that he left SUN, when McNealy is not challenging Musk on Twitter, he is CEO of Wayin, a social media intelligence company. McNealy has yet to respond to Musk’s wager.

The billionaire CEO is known to sometime challenge people with friendly (though sometime expensive) bets. He placed a $1 million wager against journalist Dan Neil’s $1,000 that Tesla would deliver the Model S by late 2012, which it did. The bet was for charity. He also reportedly placed a bet with hacker geohot on who would be able to deliver the best self-driving technology.