Tesla Model 3: people are already lining up and setting up tents in front of stores around the world

Andreas Stephens from Sydney, Australia was the first person reported in line to reserve the Tesla Model 3 in store a whole 2 days before the doors open, but now that we are about 24 hours away from Tesla accepting reservations for its $35,000 long-range vehicle, we are starting to get reports of lines and tents at Tesla stores around the world.

A $1,000 deposit is required in the US and Tesla published the list of currency amount per country. Surprisingly, it requires only a $1,000 CAD deposit in Canada despite the very weak Canadian dollar, which could encourage people to go ahead and place a deposit especially since it’s refundable. 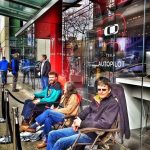 Update: The owner of the awesome Model 3 custom tent in Montreal, Ian Pavelko, reached out to us and you can follow his Twitter feed for updates:

Some people have also been spotted in Melbourne:

And someone also set up a tent at the Tesla Boston store:

Tesla is now also sharing a few pictures of early adopters waiting at its stores:

And Toronto (appropriately reading Elon Musk: Tesla, SpaceX, and the Quest for a Fantastic Future):

A queue is starting at Tesla’s Rocklin store in California:

Please let us know if you spot waiting lines or tents at Tesla’s locations. You can contact us via Twitter, email or simply leave a comment below.

The Tesla Model 3 will be unveiled at Tesla’s Design Studio in Hawthorne, California, on March 31st at 8:30pm Pacific. If you want to reserve the vehicle, Tesla revealed all the reservation process details per region and here’s everything we know about the vehicle.

Update 2: Tesla Model 3: in-store reservations a success as impressive lines of people are spotted around the world [Live updates]