Tesla Gigafactory is still ahead of schedule, but behind on job creation

According to a new report from the Reno Gazette-Journal, the Tesla Gigafactory is still ahead of schedule, but it is falling short on job creation and capital investment projections for the project. It would be important to note that RGJ is making these claims based on the most recent data available – dated September 30 and June 30 – while comparing the numbers to the state’s projections for the end of 2015.

In its analysis, RGJ assumes that Tesla is still falling short in the fourth quarter because it was lagging so far behind in September.

As of June 2015, Tesla earned $9.6 million in transferable tax credits for a capital investment of $186 million during the period, and it saved an estimated  $8.6 million in sales and payroll tax abatements.

Despite not meeting the projections, the project sparked economic growth in the region and home values in the surrounding communities of Sparks and Fernley have jumped 18 percent and 15 percent respectively since the project was announced. 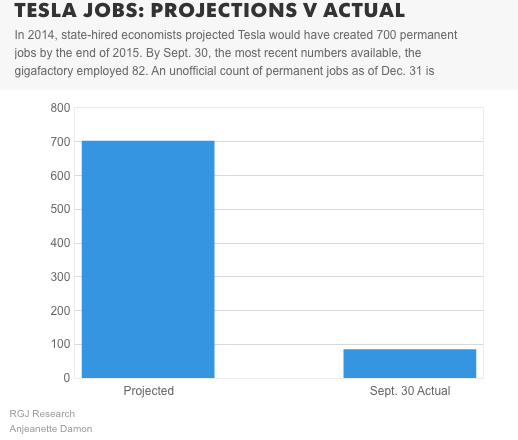 Tesla confirmed having 82 permanent employees at the Gigafactory as of September 30, while the state projected 700 employees by the end of 2015. Gov. Brian Sandoval’s economic development director Steve Hill isn’t worried about the situation:

Hill estimates that Tesla currently has around 200 employees at the Gigafactory, more than double the number for the previous quarter. He expects the true economic impact of the project will come when the factory is fully in operation.

As for construction jobs, the projections were also off. As of June 30, RGJ reports 1,348 construction workers had jobs on the Gigafactory, compared to the 2,505 projected by Tesla in its application. Tesla spokesman Ricardo Reyes explained the discrepancy:

“Tesla’s emphasis on getting the building open earlier has allowed us to hire more full-time employees earlier in the process. This has a higher economic impact than temporary construction labor.”

We should get a better idea of what “open earlier” entails and the general status of the project in the fourth quarter report in February, but we know that the factory is already producing Tesla Energy products for home energy storage and the company expects to start producing battery cells by the end of the year.

Since first unveiling the project, the planned floor space grew by almost 40% and the company said that the project is more “space efficient” than originally anticipated. Yet Tesla never updated the planned output of the factory, which is still 35 GWh of battery cells and 50 GWh of battery packs based on the latest available information.