Democrats are said to be willing to agree to a lift on the 40-year ban on US crude oil exports, if the bill includes a long-term extension of the wind and solar tax credits. The deal isn’t done, but as the industry is getting closer to the phasing out of the tax credits, which are set to fall from 30% to 10% in 2017, the industry is warning politicians about the impact of inaction.

In an interview with Mercury News, SolarCity CEO Lyndon Rive warns of a possible massive job loss if the ITC is not renewed:

“On the federal tax credit, it’s super important. SolarCity has the lowest cost structure in the country, but we did a lot of work to get there. We will be able to grow in 2017 with a 10 percent tax credit. Not just maintain, but actually grow. But the gap between us and the next company is huge.

If the math doesn’t work, you’re not going to have any customers, or very few. If you look at the industry — 170,000 jobs — I would not be surprised if 100,000 jobs disappear. It’s going to be a total devastation for the industry. There will be a few left standing that can make it work. But it’s going to be a real pain.”

Rive joins several solar industry executives in advocating for the renewal of the tax credits to maintain some breathing room for the industry to keep growing while reducing costs in order to eventually compete with the fossil fuel energy without any incentives.

Since the ITC was implemented in 2006, solar grew at a compound annual growth rate of 76 percent. Of course, the growth can also be attributed to the costs decreasing across the board in the industry.

Here are SolarCity’s costs over the past 3 years: 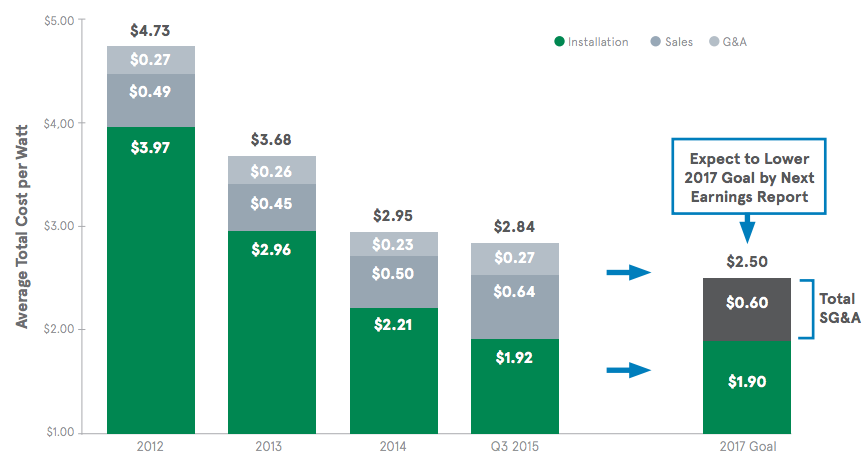 Solar energy is believed to be an essential element to achieve the goals set by the United Nation in Paris, but there’s no specific incentive for the industry in the agreement. The federal tax credit is currently the most direct government incentive for solar.

The latest reports say it could be renewed for “at least 10 years” through the lift on the ban on US crude oil exports, but no deal has been reached at this point.