Tesla will publish their second quarter financial results tomorrow, here’s what to expect

Tomorrow, Tesla will release their financial results for the second quarter of 2015. Due to their recent policy change of disclosing Model S deliveries right after the end of quarter, the company already confirmed record deliveries of 11,502 cars. The Model S being by far the main source of revenue for Tesla, there shouldn’t be too much of a surprise on the revenue side, but let’s take a look at what to expect:

Based on last quarter’s $88,930 average sale price per car, Tesla’s revenue for the quarter should be just over $1 billion, give or take a few tens of millions since Tesla also supplies services and powertrains to other car manufacturers.

Wall Street’s consensus is $1.15 billion for the quarter, while Estimize, the financial analyses crowdsourcing website, predicts $1.16 billion in revenue.

Here’s the website’s predictions for Tesla’s revenue over the past 2 years – blue is the Estimize predictions – grey is the Wall Street consensus – green is the actual results: 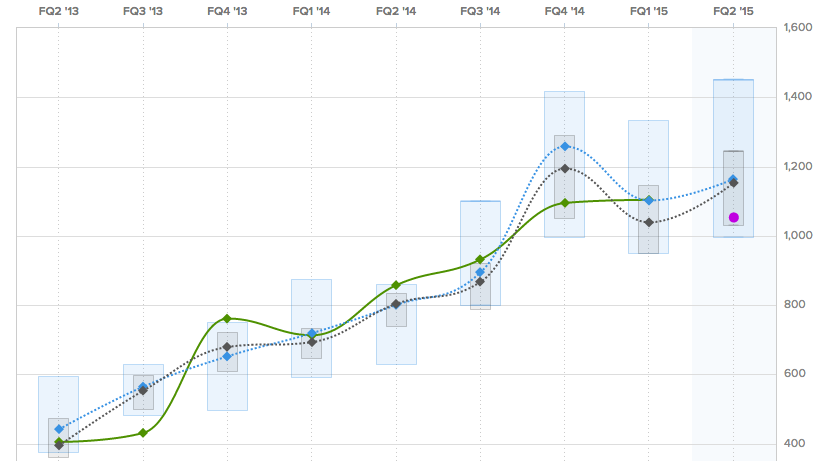 Earnings per share over the last 2 years – blue is the Estimize predictions – grey is the Wall Street consensus – green is the actual results:

Tesla is certainly focused on growth, but they try to aim for marginal profitability, which until late last year they were able to maintain, but with large capital expenditures for the Gigafactory under construction in Nevada and tooling for the new production line for the Model X, Tesla has been slowly slipping away from marginal profitability and that should remain the case until the production ramp up expected for the third and fourth quarters of the year.

Aside for financial data, shareholders are also expecting several updates regarding the Model X, the new energy storage products and maybe an update on the early response to Tesla’s new referral program.

Last weekend, we published an article about everything we know on the Model X so far, but the actual rollout of the highly anticipated vehicle remains extremely vague. We know the start of production is imminent, but we don’t know if Tesla will start by making demonstration vehicles to allow reservation holders to see and test the vehicle before turning their reservations into orders or if they will go ahead with their online design studio to get car configurations for the start of production.

Tesla is also expected to give an update on the current backlog of reservations for the all-electric SUV, which is estimated to have reached close to 25,000 reservations with deposits according to the most recent tally update.

Similar to the Model X rollout, shareholders will be expecting an update on the specifics for the deployment of Tesla’s Powerwall and Powerpack. The company has been inking deals left and right for the stationary energy storage products, but the shareholders are anxiously waiting for the money to appear on the income statement.

Tesla’s earnings conference call are always very interesting because they are rarely heavy on financials, but rather focused on the whole business, and I think tomorrow’s call will be a particularly interesting one. You can login here to listen to the call live via webcast.