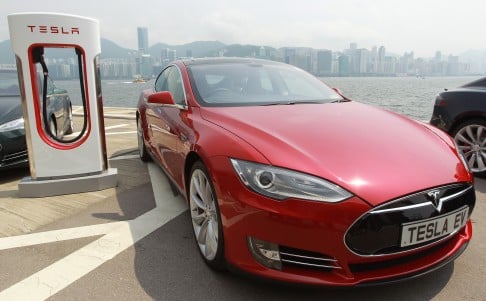 A Tesla Model S seen next to a charging station in Hong Kong. Photo: Edward Wong

The South China Morning Post has an interesting conversation with Telsa CEO Elon Musk who is in town for the Boao Forum in Hainan province.

Tesla had been “misled” by Chinese speculators into believing that demand for their vehicles was “extremely high”, leading to an excess of inventory. Many orders were not placed by genuine buyers, but resellers who cancelled when the cars arrived, the official news agency Xinhua reported, quoting Musk. “China is the only place on earth where we have excess inventory. We are essentially selling cars that speculators ordered but we were unable to deliver,” he said…

Despite the initial setbacks, Musk said the company has seen a steady increase in sales in Caina over the past three months and he is “quite optimistic about where things are headed”. “We have a strong long-term commitment to China, and we tend to establish both local production and local engineering in China,” he said. The California-based car maker began taking orders in China in mid-2013 for its Model S sedan and started delivering the first cars to Chinese consumers last April.

“It is clear that we need to think of China in a very long-term way. We need to steadily boost the confidence of the Chinese consumers,” Musk said.