BMW of North America, Volkswagen of America and ChargePoint Inc. will construct up to 100 charging stations in “express charging corridors” from San Diego to Portland, Ore., on the West Coast and Boston to Washington on the East Coast.

Construction has already started on the Western corridor, where a string of new charging stations will allow vehicles to travel the length of California and into Oregon. As many as 100 stations will be up and running by the end of 2015, said Pasquale Romano, ChargePoint’s president and chief executive.

Each station will include one or two 50-kilowatt DC Fast chargers or 24-kilowatt DC Combo Fast chargers, developed by BMW in partnership with Bosch. Those chargers — typically used for BMW and VW vehicles, as well as the Chevy Spark EV — can bring a vehicle up to 80% power in less than 30 minutes.

A lot of important considerations here (original Press release). These may or may not be compatible with Chademo cars (Nissan Leafs in particular) and Tesla will need an adapter if these will work at all with their vehicles. (All Electric Vehicles can take advantage of the Level 2 AC chargers but those only provide 20 or so miles per hour of charge).

The bigger consideration for the broad idea of these chargers is that for sub-100 mile vehicles, it doesn’t represent a complete long distance solution. The BMW i3, Chevy Spark, Volkswagon eGulf and all of the other cars that get <100 miles/charge and indeed what Chargepoint is calculating in the Press release and the graphic – this only represents a stop gap.

You travel for an hour (maybe 90 minutes tops) then you charge for a half hour (20 minutes gets you to 80% in a perfect situation). 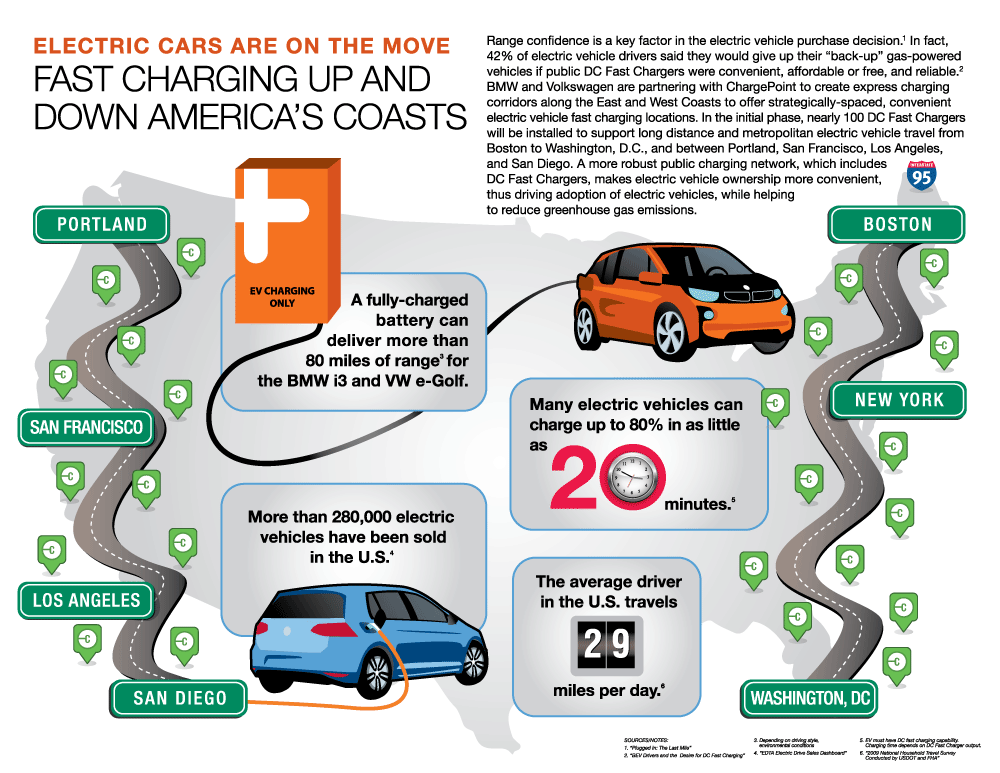 That’s not going to be a great trip, though it may make a trip from Boston to New York or other 150-200 mile trips bearable.

Tesla is still king of the EV road trip wit its 200-300 mile batteries and Supercharger network which allows fast charging up to 130kW. That means Tesla drivers can easily travel 3 hours between charging and get back on the road in about a half hour – which is similar to gas road trips.

GM and others are planning 200+ Mile EVs for 2017 and beyond however these charging stations are going to max out at 50kW meaning that to fill a 200Mile range battery will take an hour plus – still not a great situation for road trips. SAE Level 2 DC charging spec maxes out at 90A, already far below Tesla’s 130KW Superchargers.

SAE DC level 3 charging however might be a solution with its insane 240kW max. That would theoretically take a 300 mile battery pack to 80% charge in 10 minutes…the future. 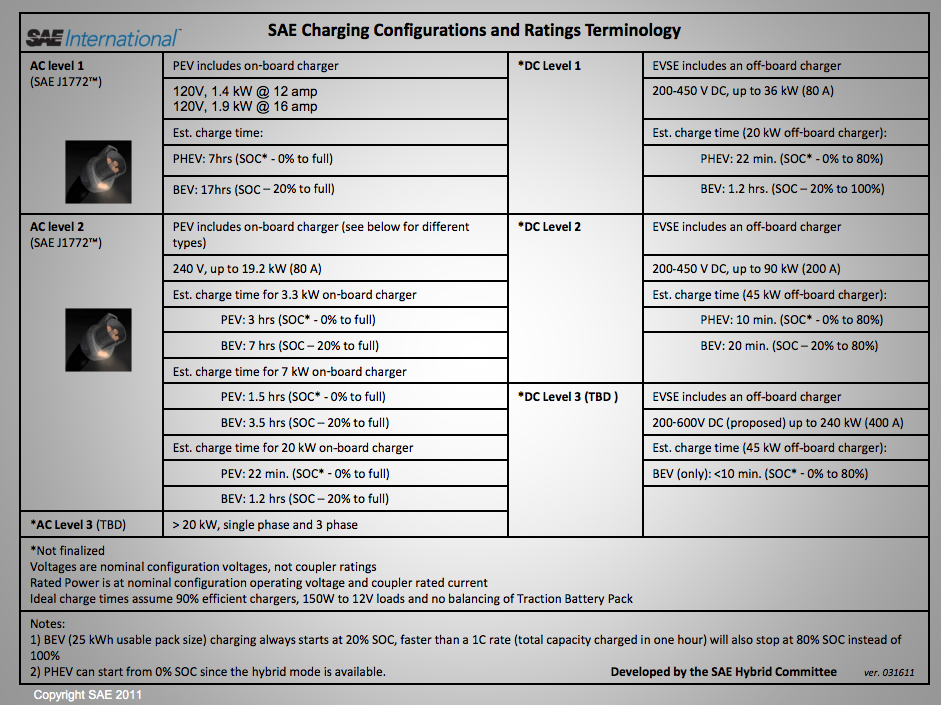 A goal of nearly 100 DC Fast chargers will be installed to support long distance and metropolitan electric vehicle travel with the BMW i3, Volkswagen e-Golf and other electric cars, along heavily trafficked corridors on both coasts, supported by Level 2 chargers.

These publicly available charging stations will be added to the existing ChargePoint network and can be easily accessed using a ChargePoint® or ChargeNow card.

Washington, D.C.– At the 2015 Washington Auto Show, two of the top automakers, BMW of North America and Volkswagen of America, together with ChargePoint, the largest electric vehicle charging network, announced an initiative to create express charging corridors along heavily-traveled routes on the East and West Coasts. Designed to increase the number of fast charging locations, the initiative will help meet the large and growing demand for convenient, publicly available electric vehicle fast chargers, including direct current (DC) Fast charging locations, and support the adoption of electric vehicles in the United States. In the initial phase, the aim is to install nearly 100 DC Fast chargers across both coasts, with plans to expand the program to increase access to fast charging across the country. These newly installed DC Fast charging stations will be added to the growing ChargePoint network of more than 20,000 charging spots in North America.

With more than 280,000 electric vehicles sold in the United States, EV owners need more charging flexibility while on the go. The express charging corridors will provide electric vehicle drivers access to DC Fast chargers along the most heavily populated and highly-trafficked regions on Interstate 95 on the east coast, from Boston to Washington, D.C., and on the west coast covering and connecting the metropolitan areas of Portland, San Francisco, Los Angeles, and San Diego. The installations will occur both within and between relevant metro areas, strategically-spaced at a maximum of 50 miles apart, making it even easier to take long road trips in an EV.

“A robust network of conveniently located DC Fast charging stations will go a long way toward increasing electric vehicle adoption and making electric vehicle ownership even more enjoyable,” said Robert Healey, Head of EV Infrastructure at BMW of North America. “The express charging corridors are another important step in the development of the U.S. e-mobility infrastructure that makes longer distance travel a real option for consumers, particularly along the most heavily trafficked portions of both coasts—making the BMW i3 and other electric vehicles even more appealing.”

“Volkswagen believes in a holistic approach to e-mobility in order to create a seamless experience for the consumer,” said Jörg Sommer, vice president, product marketing and strategy, Volkswagen of America. “The investment in the express charging corridor will provide e-Golf and other electric vehicle owners with the added support to travel their day-to-day and popular long distance routes.”

Each fast charging location along the express charging corridors is expected to include up to two 50 kW DC Fast chargers, or 24 kW DC Combo Fast chargers with the SAE Combo connector, used in both BMW and Volkswagen electric vehicles as well as many other electric vehicles that incorporate a DC Fast Charging capability. When charging at a 50 kW station, both the BMW i3 and the Volkswagen e-Golf can charge up to 80 percent in 20 minutes. Both vehicles can charge up to 80 percent in 30 minutes at a 24 kW station. Locations will also include Level 2 chargers, currently the most commonly available public charging stations, which are compatible with all electric vehicles. Level 2 stations can dispense up to 25 miles of range per hour of charging, providing a full charge for the BMW i3 and the VW e-Golf within 3.5 to 4 hours.

“Our goal at ChargePoint is to get everyone behind the wheel of an EV and provide EV charging everywhere they go,” said Pasquale Romano, ChargePoint CEO. “With strategically-placed stations where drivers need them, these express charging corridors will give EV drivers the freedom to go farther and have an EV as their only car without limitation.”

Installations have already begun on the west coast, with the first location in San Diego County. There is a target of nearly 100 DC Fast charging spots in the first phase, available by the end of 2015. DC Fast chargers along the express charging corridors are expected to be installed in convenient locations such restaurants, shopping centers, rest stops, and more. ChargePoint will leverage its existing customer base and knowledge on usage to pick strategic locations either where drivers currently charge, or to fill in spaces where there is currently a lack of infrastructure.

With the investment, BMW, Volkswagen and ChargePoint are providing drivers with the ability and confidence to enjoy longer distance driving and recharge their electric vehicles quickly, ultimately leading to greater electric vehicle adoption.