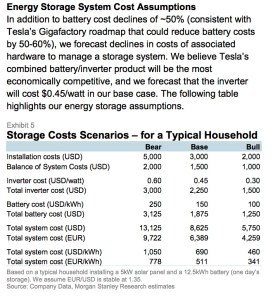 The analysts at Morgan Stanley (PDF) think that Tesla and solar utilities like Solar City could join forces to create energy products that would allow Americans to drop off their energy carrier’s grid delivery system. The price of storage of electricity and solar will soon cost less than hooking homes up to the grid and Americans and Europeans will start dropping off not just to be green but also to save money.

Energy storage, when combined with solar power, could disrupt utilities in the US  and Europe to the extent customers move to an off-grid approach. We believe Tesla’s energy storage product will be economically viable in parts of the US and Europe, and at a fraction of the cost of current storage alternatives.

Energy storage, specifically Tesla’s product, could be
disruptive in the US and Europe, but is less likely to be
economic in the rest of the world. Given the relatively high
cost of the power grid, we think that customers in parts of the
US and Europe may seek to avoid utility grid fees by going
“off-grid” through a combination of solar power and energy
storage. We believe there is not sufficient appreciation of the
magnitude of energy storage cost reduction that Tesla has
already achieved, nor of the further cost reduction magnitude
that Tesla might be able to achieve once the company has
constructed its “Gigafactory,” targeted for completion later in
the decade. While “off-grid” applications are the most
disruptive use of energy storage, we note that there are also
less disruptive applications such as strengthening the grid to
compensate for the variability of solar output.

Even at the Base/Bear cost of $10,000 for 25+ years of power, it seems like a no brainer for most households. With solar companies already financing the upfront costs, it would seem like cost reductions against a increasing grid market will flip the switch soon. Add in the cost of auto fuel savings when using electric cars and it is even more enticing.

TSLA shares are up today in early trading.