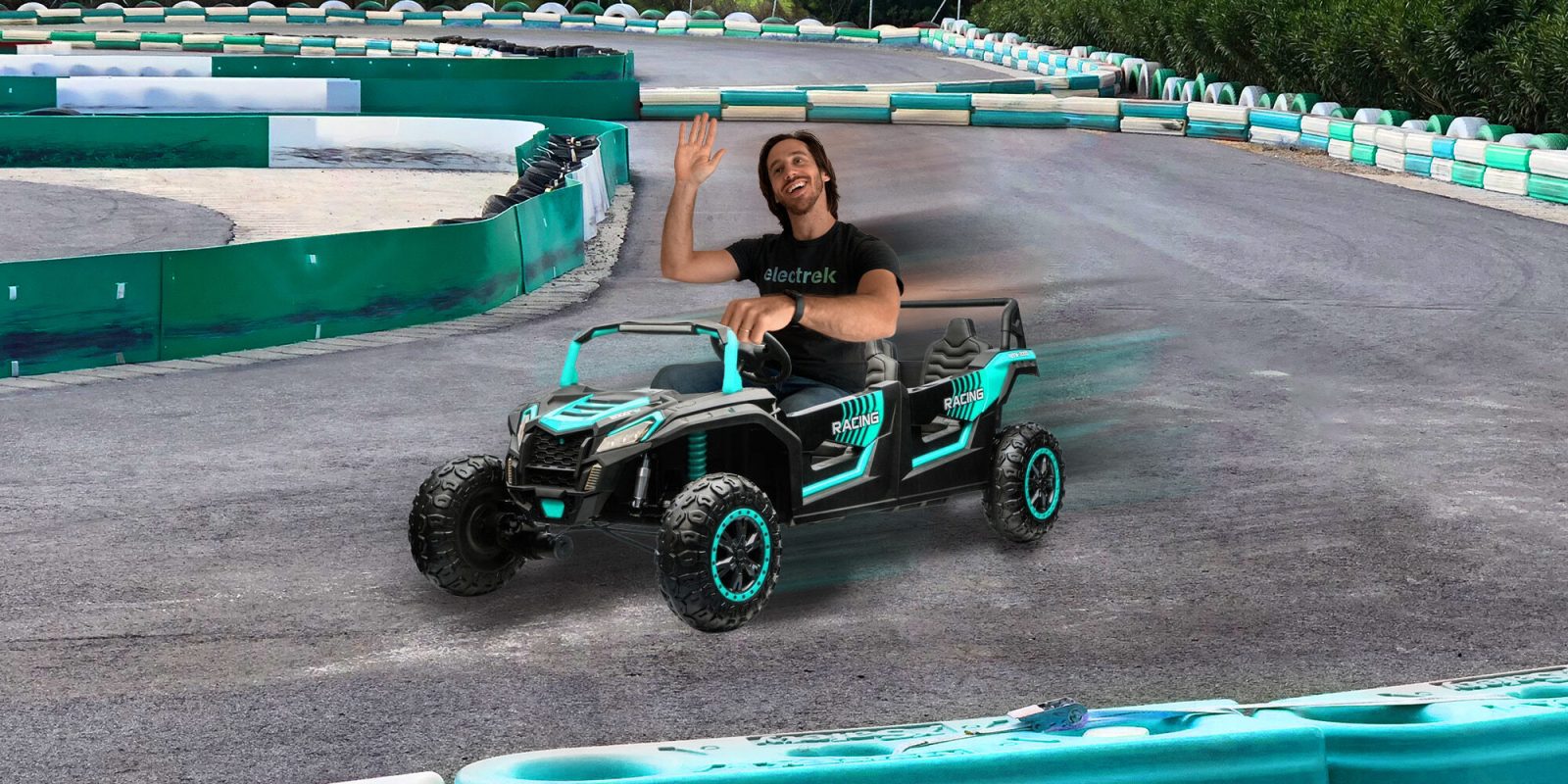 Like many of the quirky electric vehicles I find for the Awesomely Weird Alibaba Electric Vehicle of the Week series, this fun-looking electric go-kart is a bit oddly proportioned. But that wouldn’t stop me from terrorizing the local neighborhood in it, all-wheel-driving my way to my rightful position as the king of the cul-de-sac!

Don’t get too excited; it’s not some sophisticated gearbox like a typical AWD off-road vehicle.

And it’s not even four hub motors, which you’d think would be the simplest way to achieve this feat.

Instead they went with a somewhat Rivian-esque approach of having four individual inboard motors, each connected to a wheel.

That could theoretically offer some cool tank-steer opportunities, but I’m guessing this rather simplified little kart doesn’t exactly make peak use of the technological implications of four motors. Instead, this seems a bit more like the child’s toy control method of the tried and true mash-the-plastic-accelerator-button-to-go protocol.

And the fact that the vendor is calling this a “go-kart for 10-year-olds” seems to support that suspicion. I’m not sure how well I’d fit in the small seats myself, but who says I can’t hog both front seats? The entire vehicle is only 6 feet long (190 cm), so it’s not going to take up a lot of garage space!

Perhaps limiting this four-seater to just two passengers would improve its performance anyway, considering it doesn’t seem to be packing much power or battery capacity.

The 24V and 14Ah battery is only 336 Wh, or around half the size of a typical electric bicycle battery.

For a glorified kid’s toy though, I will commend the manufacturer on what looks like surprisingly decent suspension. And that upholstery seems like it’s better than what I had in my first car. And it even has four functional doors! I’m not sure why, considering they appear to be at knee height and you could probably just step over them, but they’re there anyway! So there’s a surprising amount of build quality going into a $450 vehicle here.

The only problem is that the vendor requires a minimum order quantity of 30 vehicles. Though with 62 apparently fitting into a container, we might as well fill that sucker up and float it on over stateside. A mere $28K later we could start our own racing league, or perhaps a demolition derby! I’m not sure I’ve ever seen a convertible in a demo derby, but I’m also not convinced there’s a lot of kinetic energy to pass around between these things, so it’d probably be a bit more like medium stakes bumper cars.

That’s a good thing too since the roll bar appears to be at around chest height, meaning it’s going to do a better job of protecting your Levis than your noggin.

But if safety isn’t your primary (or even tertiary) concern, then this Alibaba electric kart could be a fun little way to waste several hundred bucks. Or as a platform for hot rodding, swapping in a 48V battery and four 1 kW motors could turn this thing into a proper little wagon for terrorizing the neighborhood. Your neighbor’s petunias won’t even see it coming…