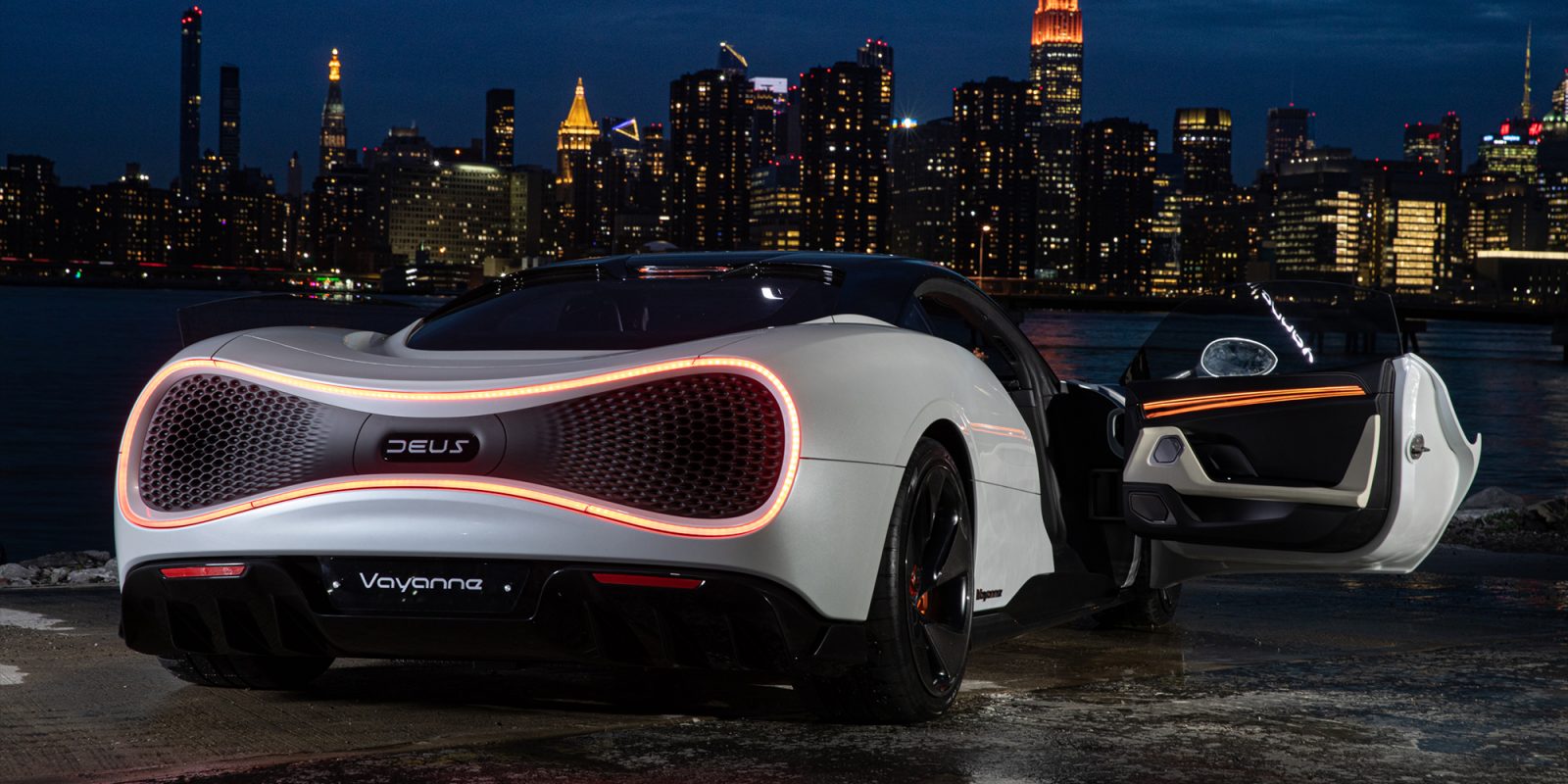 “New York. Concrete jungle where dreams are made of, there’s nothing you can’t do.” – Alicia Keyes. This song could have served as an anthem for DEUS Automobiles as it debuted its Vayanne electric hypercar concept at the New York International Auto Show today. Together with Italdesign and Williams Advanced Engineering, DEUS hopes to take the Vayanne from “just another concept” into limited run production and is promising some specs that are truly worthy of the “hypercar” moniker.

If you’ve never heard of DEUS Automobiles, its because the company is less than two years old and just began teasing glimpses of its first-ever EV last month. DEUS was founded in Vienna, Austria, in 2020 with the goal of carving its own path in the hypercar sector by offering fresh and objective vision alongside innovative concepts — that plus hot, nasty speed.

As a newcomer, DEUS Automobiles enlisted the help of experienced companies like design and engineering firm Italdesign, whose GTZero electric concept we gawked at years ago. The trifecta was made complete by adding UK-based Williams Advanced Engineering, the tech division of the Williams Formula 1 racing team. Per DEUS:

DEUS Automobiles, Italdesign, and Williams Advanced Engineering stand as one to inspire the way to luxury electric hypercars. This unique partnership emerged DEUS’ ambition to design and create an electric hypercar set to become the benchmark of driving emotion. Our dedication to achieving perfection is further refined by Italdesign’s heritage and skills and Williams Advanced Engineering’s ground-breaking electrification technologies.

The benchmark these companies combined to create is called the Vayanne, a nod to the pronunciation of “Vienna” in German, the national language of Austria. During the New York International Auto Show, the DEUS Vayanne concept made its world debut, and its creators are promising some insane performance with the simulations (?) to back it up.

Following the world debut in New York, DEUS Automobiles shared specs of its Vayanne concept in a press release, and they’re pretty ridiculous. Before we share, it’s absolutely crucial to note that DEUS’ performance numbers are computer simulated and have not yet been validated, so take them with a rail of salt.

For perspective, these specs are pretty on par with the Aspark Owl, which was previously crowned the fastest electric hypercar on the planet – oh and the most expensive too. Dyrr Ardash, head of strategic partnerships at Williams Advanced Engineering, spoke to the Vayanne’s premiere:

Building on our existing and successful collaborative partnership with Italdesign, we are delighted to be part of the world premiere for the DEUS Vayanne, a hypercar that seeks to combine luxury with ultimate performance. Working as the Electrification and Technology Partner, we look forward to employing our expertise in electrification to support the program’s performance targets.

Despite debuting as a concept with simulated performance specs, DEUS has every intention of manufacturing a production version of the Vayanne – 99 of them actually. The automaker is currently expecting to deliver its first production-intent hypercar in 2025.

You don’t get to see the Vayanne go any faster than a roll, but here’s a video showing some different angles:

This post will probably catch some flack because it’s merely a concept and it has a distinct aroma of vapor, and I won’t disagree. To play my own devil’s advocate for a second, what if it isn’t? Wouldn’t it be better to have shared this concept with the world sooner rather than later? Then you all can reminisce with me like, “remember when? We were on the forefront of the DEUS era!”

It’s a cool looking hypercar, even with the “raccoon rear” as I’m calling it. However, DEUS isn’t doing itself any favors by spewing out numbers that are merely simulated. I know you readers, and I stand with you in this particular instance. We’re going to need more hard evidence, so DEUS Automobiles needs to complete the last three steps of the scientific method, then repeat.

If DEUS is genuinely going to scale to produce 99 of the Vayanne hypercars, its gonna need a Tesla-sized bankroll, plus it’s going to have to charge an arm and probably two legs to turn a profit. Remember that Aspark Owl mentioned above with similar (yet validated) performance specs? Those start at an MSRP of $3.5 million.

If DEUS gets to a point where its offering pricing on the Vayanne, expect it to be one of the most expensive EVs in the world. Earnestly rooting for their success, but not believing anything until its more than just ones and zeroes.