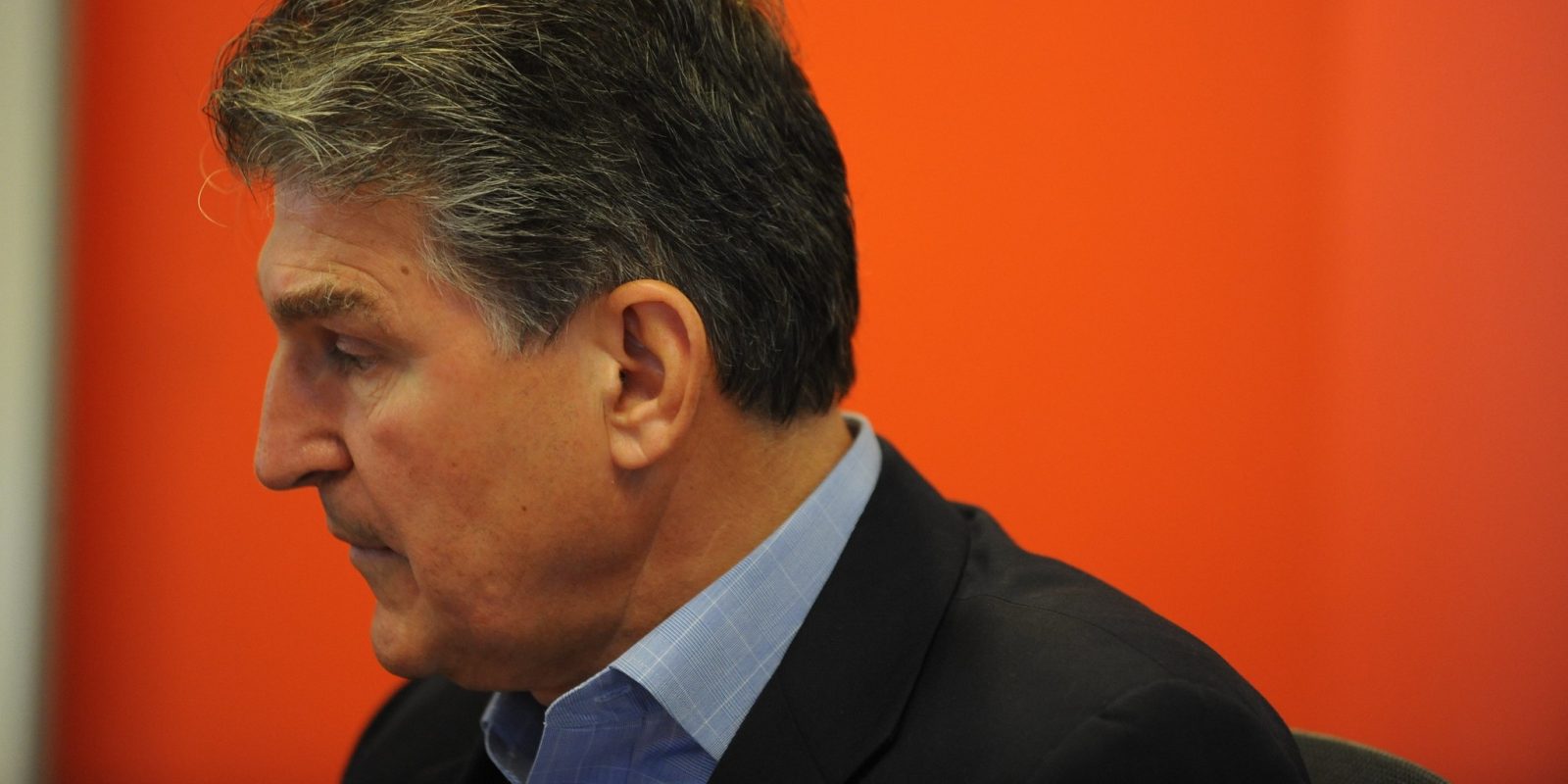 In case people to the left of, say, Mitt Romney (Republican, UT) or Susan Collins (Republican, ME) needed an additional reason to despise coal-addict Joe Manchin (For Rent, WV), the most dependably conservative-abetting senator gave it to them this week in comments mocking sustainable and clean air proposals while defending billionaires from higher taxes to fund those proposals.

Joe “I’m an even worse political flip-flopper than Joe Lieberman” Manchin has been busy turning what’s left of President Joe Biden’s original $3.5 trillion spending bill into a runty, defanged, it’s-barely-better-than-nothing package worth about half that. Of late he’s been resisting proposed tax increases on the rich.

He then defecated on the bill’s plan on other things, including freeing $7.5 billion in funding to encourage businesses away from polluting fossil fuels to sustainable alternatives.

The notion of giving companies and consumers more incentives to drop gas-burning cars for EVs really got up Manchin’s nose. It’s been a busy week for his orifices.

Manchin told the Economic Club of Washington on Tuesday:

I said I’m having a hard time with that. I don’t remember the federal government building filling stations when Henry Ford invented the Model T.

It probably would have if to-the-highest-bidder Manchin had been in office during that era. Instead, his here-and-now is propping up Big Coal dominating economic activity in his home state, while also going to bat for the oil industry in which he also has his own money invested. But for a bit of perspective, let’s actually consider Manchin’s yearning for his hero Ford rolling out the first Tin Lizzies on his lonesome over the current everyone-gets-a-decarbonizing-trophy period.

Back in the 1908 Manchin thinks was so virtuous, American women did not have right to vote. Union members were violently attacked by company-hired thugs and police. Entirely unregulated child labor was still widespread. Ford himself, meanwhile, was a notorious anti-Semite, racist, and sworn enemy of organized labor.

Yet, curiously, Ford also provided generous salaries, benefits, and perks to his own employees, whose income and standards of living he considered far too low compared to wealthy people like himself. Manchin conveniently forgot about that while praising the early 20th century as the paragon of free enterprise, and adding his recurring oil and coal dividend income to his $5 million net value.

Although he’s the most attention-starved, obnoxious, and blackmail-inclined of his ilk, Manchin isn’t the only legislator with a Democratic Party membership card bent on doing things only Republicans could approve of.

Kyrsten Sinema (WTF? – AZ) is the other Macy’s Thanksgiving Parade-sized traitor to her nominal party in service of her financial backers. She similarly betrays the millions of Democrat and independent voters who backed Biden for his promises to finally start taking global warming seriously with policies to transition the nation to sustainable, carbon-free technologies.

Meanwhile, she and Manchin have been joined by lower-profile Democrats in both houses who have been clutching their pearls into nacre dust in horror of supposedly Leninist notions like “spending,” “program expansion,” and “economic modernization.” As a group, they’re like the infuriating backfield of a soccer team bent on scoring own goals in the name of fair play vis-à-vis the opponent – not to mention the bets they’ve made on their side losing.

Even beyond the current wrangling over Biden’s spending details (and the ticking clock of global warming at the center of those), Manchin’s antics bare his status of embodying everything wrong and entirely rotten in a political system bought and paid for by business lobbies, and populated with hacks eager to put individual political career interests several time zones ahead of the collective good.

That starts with Manchin’s living-by-example demonstration of how the Senate he belongs to has become a nonsensical, anti-democratic Rube Goldberg contraption in which a single member from a state of 1.7 million people wields the same power as a peer representing nearly 40 million Californians. For a country that regularly lectures other nations about the virtues of “fair and free elections” and “one person, one vote,” the US is way too comfortable with a toilet-load of senators – the vast majority of those from the GOP, but several Dems, too  – whose mere presence as voting equals in the upper house is an insult to democratic principles, human intelligence, and primary school math.

But dems the rules (sorry), so Manchin gets to hold the nation and the world hostage by deciding what parts of the bill live, and which die all by himself. Which means it’s highly likely the proposed Biden tax on companies that produce methane gases is already being primed for embalming. Not because Manchin has political interests and personal financial stakes in that – perish the thought! – but because, like protecting the ficking fulibuster, he claims it’s only fair.

With a lot of the things they are talking about with methane, I’m understanding from the people that produce natural gas and the methane, they can’t get pipelines approved. So the environmentalists can’t have it one way and then say, ‘We can do this (tax) and fine you for this because we want you to do this.’

He then added what most readers were themselves thinking as they read the above quote:

It doesn’t make any sense at all.

Little does on Planet Manchin, unless you’ve lost all shame in transparently selling your public duty out to special interests, and readily speak absolute rubbish in the supreme confidence nobody will notice.

As Biden’s plan continues to shrink from incessant negotiating-cum-surrender, Democrats and independent progressives everywhere hope Christmas comes early with Manchin and Sinema seeing reason, being honest, and buggering off to the GOP so they can be openly and mercilessly fought as the enemies they are.