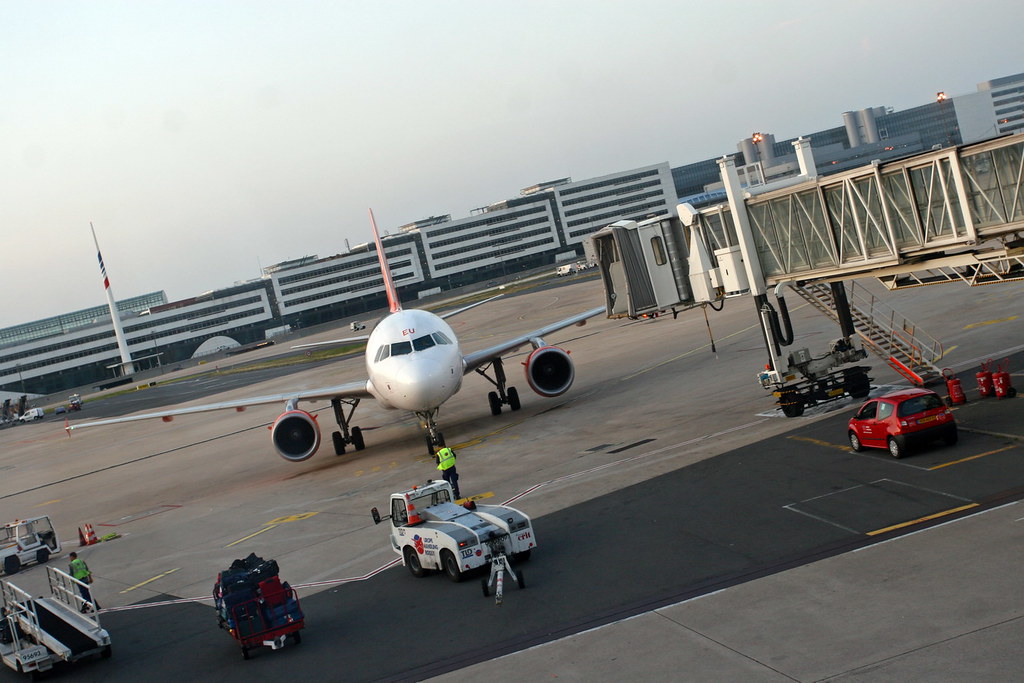 Groupe ADP, the French company that operates Paris area airports, is running a trial of autonomous electric vehicles (EV) transporting luggage in the Charles de Gaulle platform – the biggest in Europe now that Brexit has turned Heathrow into a mid-Atlantic outpost.

Groupe ADP revealed the test operation this month as part of its efforts to decarbonize on-ground airport activity, and generally shift operations toward sustainable energy alternatives to fossil fuel. The low-slung EV transport units can carry airliner luggage bins holding from 30 to 40 suitcases. They operate autonomously using GPS and an array of sensors capable of navigating them around planes, and to and from terminal baggage delivery systems.

The terrestrial e-drones are supervised with an artificial intelligence-enhanced central server, which compliments the natural intelligence (or lapses thereof) of human monitors.

But if successful, those will evolve to next-generation carriers ultimately hauling bruised and battered luggage in live conditions, which Groupe ADP believes will lay the ground for generalized use of automated EV systems. Those, partners in the process say, promise to decreases tarmac accidents, provide faster delivery of luggage and goods hauled, and reduce surface areas required for ground vehicle maneuvering. And, you know, the carbon thing.

“We strongly believe in the complete automation of the tarmac because, thanks to this type of solution, we bring operational peace of mind and better working conditions, while reducing operational costs and expenses related to accidents,” said Orok cofounder and president Pierrick Boyer. “Not to mention the optimization of flows and the ecological aspect, since our solution is 100% electric.”

Even circumspect experimental use of autonomous EV activity at Charles de Gaulle is worth noting. The airport is one of the largest cargo platforms in the world, whose 79 plane parking slots used for freight function 24/7, and process up to 4 million tons of cargo each year. One small step for automated EVs there could eventually evolve to become a bigger stride for the planet. Or so it is hoped.

“Thanks to this experiment with Orok’s autonomous vehicles, we are testing innovative tools alongside Air France to improve the performance and safety of air freight activities, for which Paris-Charles de Gaulle is one of the leading airports,” said Groupe ADP CEO Edward Arkwright. “This autonomous technology is promising to help us transform our processes, while contributing to the environmental transition of our ground operations.”

As noted above, any effort by legacy industrial and transport industries to adopt carbon-free alternatives to fossil fuels is worth encouraging – and talking up as they do so.

Still, the trial of Orok autonomous baggage handling EV craft using empty luggage bins in a section of a remote cargo warehouse isn’t the kind of intrepid trailblazing this sweating planet awaits. The dearth of system specs on Oroks’ own site – offering vehicle dimensions (“load: 1.5t; size: 1500x2400x540″), but nothing about battery capacity, charging time or station availability – also causes the eyebrow to reflexively arch. It’s a start in an admittedly bustling, high-risk, and strategically vital transport hub, but seems a very cautious one amid an increasingly urgent climate change crisis.

So it’s now up to Groupe ADP, and other global air transport actors, to prove this is more than Boy Scout earnestness to finally go green by an industry which is everything but.