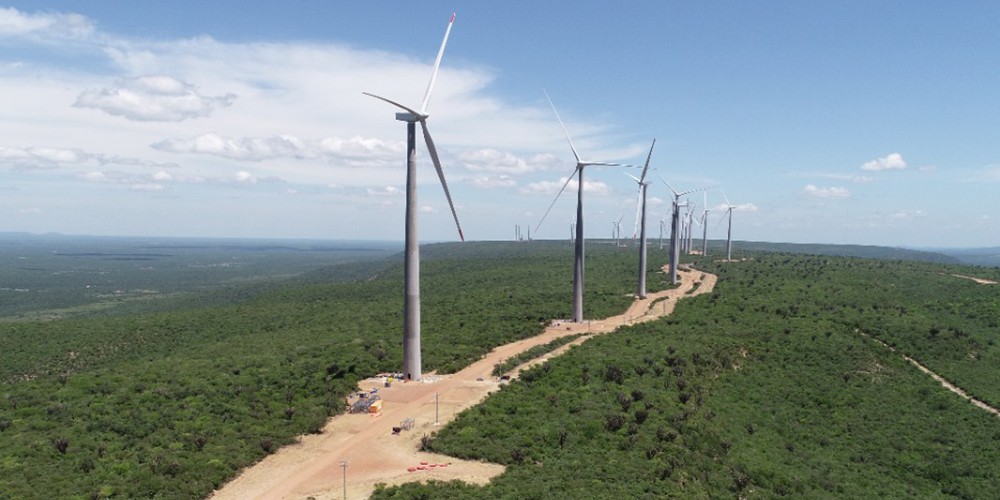 The $750 million wind farm is in the municipalities of Lagoa do Barro do Piauí, Queimada Nova, and Dom Inocêncio, in Brazil’s northeastern state of Piauí.

It consists of 230 wind turbines and will be able to generate over 3.3 TWh per year. It will avoid annual carbon dioxide emissions of more than 1.6 million tons.

206 MW of the wind farm’s installed capacity will be delivered to the free market for sale to retail customers. 510 MW were awarded to Enel Green Power in Brazil’s A-6 public tender in December 2017. (It’s called “A-6” because projects have six years to come online.) Enel Green Power’s share is supported by 20-year power supply contracts with a pool of distribution companies operating in Brazil’s regulated market.

In December 2020, Enel broke ground on the 396 MW Lagoa dos Ventos III wind farm. The new $435 million wind farm will bring the total capacity of Lagoa dos Ventos to around 1.1 GW. I, II, and III will have a total of 302 wind turbines and will be capable of generating around 5 TWh annually. It will boost the elimination of carbon dioxide emissions to over 2.8 million tons annually.

As our largest wind facility in the world, Lagoa dos Ventos represents a significant step forward for our sustainable growth, while also supporting the green recovery in Brazil, further contributing to the diversification of the country’s energy mix.

Brazil gets a lot of deserved bad press about the destruction of the Amazon rainforest. The country also has a pretty good track record of using renewable energy.

According to the International Energy Agency, “Access to electricity across the country is almost universal and renewables meet almost 45% of primary energy demand, making Brazil’s energy sector one of the least carbon-intensive in the world.”

But unfortunately, so is the use of natural gas. Brazil has found enthusiasm for fossil fuels with the offshore discovery of both oil and natural gas. “According to IEA forecasts, net oil exports will pass the 1 million barrels/day mark by 2022.”

Brazilian president Jair Bolsonaro is rightfully being pressured by the rest of the world to reduce emissions and stop deforestation of the Amazon because the problem is serious and urgent.

Deforestation soared 67% in May from the same month in 2020, according to Brazil’s national space research institute Inpe. Bolsonaro has failed to protect the Amazon from illegal logging, and he slashed environmental funding in April, just a day after he said he’d double it.

Unfortunately the Bolsonaro regime has rolled back some of the environmental enforcement. We’ve had this conversation. They say they are committed now to raise the budget. If we don’t talk to them, you’re guaranteed that that forest is going to disappear.